Tom Hardy And Joel Edgerton Face Off In WARRIOR 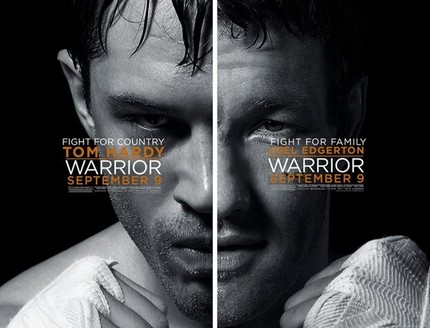 They say all things cultural flow in cycles. And, that being the case, it appears to me that in certain key ways film is now swinging back to the 70s. As evidence just take a look at the current hot crop of leading men, actors like Jeremy Renner, Michael Fassbender, Tom Hardy and Joel Edgerton. They appear on virtually every casting wish list for a 30-something white man for a very simple reason: All of them project the same combination of raw masculinity and intelligence that used to be the driving force of 1970s action film before the 80's came along and split things up into Beefcake Versus Pretty Boy.

And now two of the hottest young leads are facing off against each other with Tom Hardy and Joel Edgerton starring together in Gavin O'Connor's Warrior.

Two brothers face the fight of a lifetime - and the wreckage of their broken family - within the brutal, high-stakes world of Mixed Martial  Arts (MMA) fighting in Lionsgate's action/drama, WARRIOR.

An ex-Marine haunted by a tragic past, Tommy Conlon (Tom Hardy) returns to hishometown of Pittsburgh and enlists his father, a recovered alcoholic and his former coach, to train him for an MMA tournament awarding the biggest purse in the history of the sport. As Tommy blazes a violent path towards the title prize, his brother, Brendan, (Joel Edgerton) a former MMA fighter unable to make ends meet as a public school teacher, returns to the amateur ring to provide for his family after being suspended from his day job. Even though years have passed, recriminations and betrayals keep Brendan bitterly estranged from both Tommy and his father.

But when Brendan's unlikely rise as an underdog sets him on a collision course with Tommy, the two brothers must finally confront the forces that tore them apart, all the while waging the most intense, winner-takes-all battle of their lives.

It doesn't even matter what the story on this one is, really, with Edgerton and Hardy in it I will see it. Period. But, that said, the opportunity to see Hardy and Edgerton beat the tar out of each other is pretty appealing.