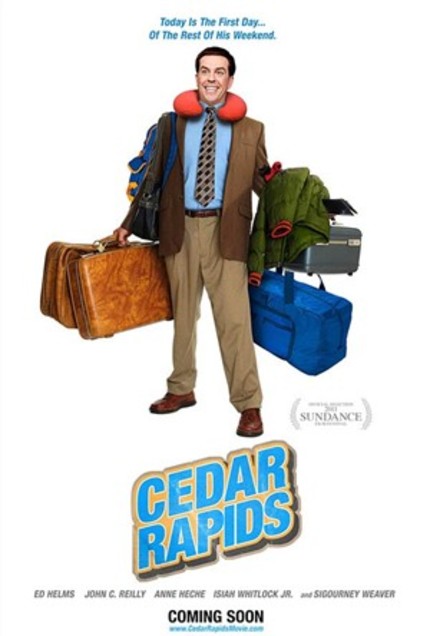 The new comedy "Cedar Rapids" strives to be many things. It presents itself as a fish-out-of-water comedy, but is actually an underdog freak show of sorts. It presents itself as the latest quirky "mini-major" indie comedy, vying for that "Little Miss Sunshine" box office magic, but, like LMS, it is, in actuality, an audience friendly sitcom in disguise; a sheep in wolf's clothing. (Well, maybe a sheep in a slightly edgier sheep's clothing.) Being that the story takes place at a big midwestern hotel-based insurance seminar, all the protagonists are, unsurprisingly, in the insurance business. So that's at least one very specific heretofore untapped demographic which may one day embrace this film with the fervor that much of the populace embrace "Office Space". But aside from any filmgoing insurance agents desperate to be reflected in a positive light, all other audience members will likely find "Cedar Rapids" to be a movie as marginally entertaining as it is quickly forgettable, if not also a little hypocritical.
Taking place in Iowa but shot in Michigan (a situation that, at a glance, appears to reek of recent Midwestern production tax credit fiascos), the films' bearing the Iowa-centric title "Cedar Rapids" proves to be the most audacious thing about it. Ed Helms, so successful in "The Hangover" and NBC's "The Office", is expected to carry this movie, and considering what he's got to work with, he does reasonably well. He plays the unrealistically naive man-child lead, Tim Lippe.

Lippe's charater can't help but conjure cynical questions with cynical answers. Such as: Why, despite a successful career as an insurance agent in rural Wisconsin, does Lippe remain a naïve man-child? Because he lives in a midwestern small town, of course. This despite the fact that it is later revealed that he chose his profession as a child, when an altruistic agent defended his family following his father's sawmill accident. Lippe is a character who should clearly know the gruesome realities of the world and of his own business, but alas, it ends up being up to his new-found "big city" pals to help him find his backbone in what proves to be one of the most mundane Joseph Campbell heroes' journeys ever realized.

Along the way he meets the colorful and talented supporting cast of the film, an ensemble that redeems certain moments, if not the whole package. There's Ronald Wilkes (Isiah Whitlock Jr.), not only the token straight man in this comedy mix, but also the token black guy. A darn-near unrecognizable Anne Heche plays Joan, an unhappy wife with children at home who routinely uses the convention to cut loose with booze and extra-martial shenanigans. And then there's John C. Reilly's boisterous and bawdy life-of-the-party, Dean Ziegler. Lippe was warned about Ziegler, but it isn't long before they forge some sort of weird bond. Reilly is definitely having a ball amusing himself in this part, as the film comes increasingly more alive when he's on screen doing his thing. Through the guidance and support of these three unlikely pals, Lippe will learn valuable lessons about the shades-of-grey grown-up world, and will confront his insecurities. By that I mean, he'll get wasted, goof off and get laid, because in movies like this, there lies the path to enlightenment.

Sigourney Weaver, looking and playing her older age for the first time that I know of, looks to have contributed about a single day of shooting as Lippe's boyhood school teacher/bed buddy (ewww!). Kurtwood Smith is the holier than thou man in charge of the convention, who - shock and dismay! - is actually corrupt. Which goes to show, "Cedar Rapids" is interested in character morality after all. Smith is clearly a bad guy for taking money for awards, but Joan's fooling around is all part of the Cedar Rapids experience, a problem for another day (another movie). Perhaps the bottom line is intended to be Smith's hypocrisy, or how his sins are of a public affair, as opposed to a private, er, affair. But then again, in a film that is itself build on hypocrisies; it's not hard to chalk this up as yet another one.

Lippe's problem is this: His insurance office has built its winning reputation on the bedrock of having won the prestigious Two Diamonds industry award three years running at the annual Cedar Rapids convention. When the individual responsible for netting said awards suddenly dies in a freak accident, the pressure to bring home award number four falls onto Lippe. But Lippe is a novice in the ways of everything from airport security to hotel check-in, not to mention more than a little socially awkward. (He apparently doesn't know much about hookers or African-Americans.) Why anyone, especially his boss, would mistake him for a grab-the-bull-by-the-horns go-getter is beyond me, but hey, we seem to be expected to forgive such details, since this is only a comedy, right?

This brings us to another critical flag on the field, as well as the film's biggest point of hypocrisy. An underlying attitude in mainstream movie comedies, on behalf of both the filmmakers and the viewers, is that if a film is out to make people laugh, it somehow warrants a critical free pass. To cite the title of another recent American yuk-fest, we're expected to "just go with it". Certain messy details should be dismissed and bad writing should be overlooked, all in the interest of the almighty laugh. I love comedy as much as the next guy, probably more so. I really do. Which is why I take this opportunity to make an example of this gussied-up hollow effort, and to make a plea for a return to quality comedies. (Billy Wilder, where are you now??)

Director Miguel Arteta ("Youth in Revolt", "Chuck & Buck") knows a thing or two about making quirky lower-budget movies with recognizable stars in them. But this time the seams are showing. Certain devices that should be invisible in good comedy stand out like unnecessary sore thumbs here. For example, since characters can't just talk to exchange information in movies like this without some sort of shtick justifying the scene's inclusion, we end up a few embarrassingly transparent moments on behalf of the filmmakers. When Lippe has a brief heart-to-heart exchange with Smith's character early on, the filmmaker's made the decision to set it in a locker room, so the moment could culminate in an awkward naked man-hug. Or even worse, when Ziegler comes in to tell Lippe something important, Lippe is on the toilet - apparently the victim of bad yogurt - a story element that is neither here nor there except that it allows Reilly to toss off a number of wacky smelly dump quips.

For future undemanding audiences watching "Cedar Rapids", say, in a hotel room, it may very well serve as passable time-killer (if also a little meta, considering it's setting and all). But any discerning viewer looking for the next witty comedy should know the two faces of "Cedar Rapids": It is a shamelessly cliché-driven gag-fest when it wants to be funny, but it waves the flag of its conflicted and irresolvable grown-up character situations when it wants indie cred. It is somehow trying to be both lowbrow and highbrow, but ends up just browbeating and pandering.

Next time you consider visiting "Cedar Rapids", you may care to consider the actual Cedar Rapids instead. (I hear it's very nice.) Or maybe Michigan.