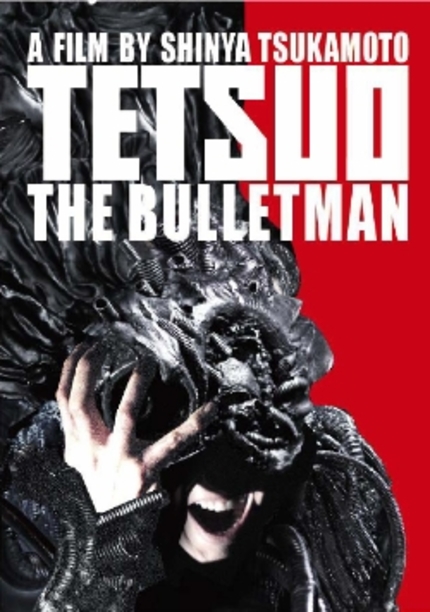 The last few years Tsukamoto has been experiencing a slight decline towards (relatively) more commercial cinema. His latest (Nightmare Detective 2) is the ultimate proof of this change of style. Some might have you believe this new Tetsuo film is continuing the downward spiral, I clearly saw a completely different film. Tsukamoto returns back to his optima forma and delivers a film filled with more insanity than his age would ever betray.

You'll be hard-pressed to find a positive Tetsuo: The Bullet Man online. And while most negative feedback is definitely grounded, it seems to be missing the point entirely. This third Tetsuo film is in every way more of a sequel to the first film, somewhat ignoring the style and direction of the second one. It's in part an update of Tsuka's first Tetsuo film, but also somewhat of a rehash. I can only guess of course, but I'm not sure everyone was hoping to see the limitations of the first Tetsuo resurface after 20 years.

The Bullet Man was produced by an American company, somewhat explaining the switch to an American male lead (English dialogues included). Luckily these English dialogues makes sense within setting of the film (American boy living in Tokyo) and Tsukamoto is not pulling a Miike here. Still, I admit I too would've preferred an all-Japanese cast and native Japanese language track. The English feels awkward and static and even though it's probably how Tsuka wanted it to be, as someone who doesn't speak Japanese it would've been less of a hurdle if the film had been written in Japanese.

There's also a bit more background story to the Tetsuo saga. Many have faulted the additional story elements and complained the film is less vague and open than the first Tetsuo. This is definitely the case (though there really isn't that much extra plot to work through) but hardly something to worry about. Tetsuo was never about interpretation or a good story in the first place. The additional information here isn't really adding anything but it's not as if it's terribly in the way of the rest of the film either. Tetsuo is about dudes turning into metal and that's what you'll be getting.

Visually there's a big change between the gritty black and white of the first film and the moody, colored digital look of this third installment. It's a good thing Tsukamoto has had some prior experience with digital filming which is definitely paying off now. Everything looks lush, atmospheric yet gritty and smoky, only in a different way. The visual effects are spot on too, the same goes for Tetsuo's transformation designs. I really don't understand the bad press here. It's not as if the first Tetsuo didn't look as if he was made from anything other than paper mache. The third Tetsuo doesn't quite look like he's made from iron (which would make him quite expressionless by the way), but I didn't really see the rubber either. In the end, he just looked pretty bad-ass, which is all that mattered.

As for the editing, Tsukamoto still has it. Hyperactive, frantic, insane yet controlled and razor sharp. It masks some of the technical imperfections and heightens the atmosphere and pacing, making the action scenes all the more brutal. It also works wonderfully well with Chu Ichikawa (the man's back!) his soundtrack. Lovely metallic sounds, crunchy effects and pounding industrial tracks. A shame I couldn't see this film in theaters, I'm sure it would've sounded even better.

As for the acting, Tsukamoto's typical Kaijyu Theatre-style is back once again. It might clash a little with the American actors (we might be used to frantically screaming Japanese men by now, it still looks a little strange if an American does it) but overall the acting isn't even all that bad. Bossick does a pretty job, comparing him to Taguchi would be a little unfair though. The rest of the cast is not bad either, with the nice addition of Tsukamoto himself picking up the role of bad guy once again.

Tetsuo 3 is a pretty short film (80 minutes tops) but considering the frantic visual style and pounding soundtrack that's not necessarily a bad thing. There is no filler, no needless drama, any explaining that needed to be in here is short and to the point. In an ideal world another 10 minutes could've been cut to erase some of the obsolete story elements, but they never really interfere with the important parts: audiovisual transformation mayhem.

So while negative feedback on the dialogues and script is hard to contradict, it doesn't really differ all that much from the original Tetsuo. A film with a pretty long list of defects, all of them eclipsed by the uniqueness and positive points the film is bearing. Tsukamoto's third film is just like that. It's an audiovisual assault that knows little to no equal, staying close to the spirit of the original. As a fan of everything the first Tetsuo represents (still one of my top 10 films), I simply loved this sequel.

Usually negative feedback lowers people's expectations (which is a good thing), in this case many potential viewers seemed to dismiss this film completely without even giving it a fair chance. Don't be one of these people. Tetsuo: The Bullet Man is a worthy sequel to Tsukamoto's first feature film. It bears the same charm and defects as the first Tetsuo and some very minor extra glitches, but the core is still there. An assault to the senses in pretty much every way possible. So make sure to make up your own mind, just don't expect a true "upgrade" (ie a film influenced by 20 years of modern film making).
Sign-In to Vote
Tweet 0 Submit

More about Tetsuo The Bullet Man

I'm glad to see this review posted. You more or less summed up my feelings exactly. I only wish I could see it in a theater as well, sitting in the front row so the image engulfs you and the audio as loud as a rock concert.

have to disagree here. as a huge tsukamoto fan who has loved everything he touched prior to nightmare detective, this comes as a major letdown.

performances were completely awful, and this offered nothing over the previous two films.

i hope the real tsukamoto is still alive somewhere.

I just watched it. The script seemed to go into the origin of the Tetsuo shtick to pad out the run time as to make it longer than an hour. It didn't seem to make a lot of sense, but, like you said - who cares - it's about metal screamin' dudes blowing themselves up.

It's very likely Tsukamoto was begged to do this and approached it only for fun. And that's really all it is; fun. In truth, I actually liked it better than Body Hammer as, tonally, it felt more like the original.

I thought the effects were great, particularly for being done in the still nascent low-budget digital realm. I thought Bossick did a great job and wore his freaky get up well.

I will say I went into this with low expectations - mostly because I didn't care for Body Hammer and the fact that Bullet Man was obviously fan service. All things considered - not bad. In fact, it would've been a great pilot for a cable show.

The very end was brilliant, can't fuck with it!