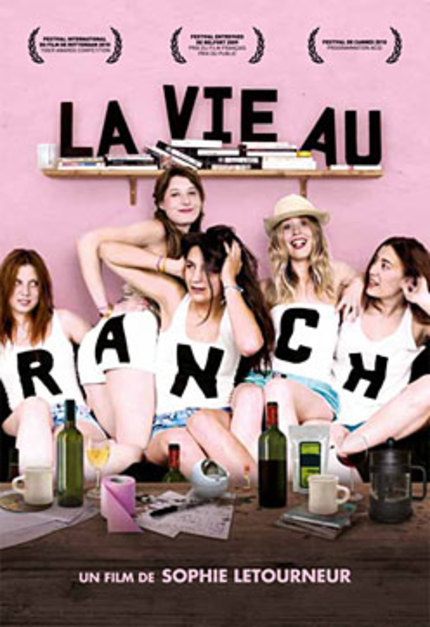 In Sophie Letourneur's unassumingly fantastic debut, Chicks (French title being the more elegant La Vie au Ranch, which means Life at the Ranch), a gaggle of directionless 20-something young ladies traipse through their Parisian, smoky, beer-goggled and boy-crazy lives for 92 minutes of film-time. Through the cinema-vérité shooting style, effortlessly natural performances, and time-skip-aheads near the end, Letourneur effectively leaves you feeling like you've seen feminine youth itself encompassed within that hour-and-a-half--or at least her version of it.

Primarily revolving around three college students and best friends--Pam, Manon, and Lola--Chicks kicks off with them stumbling around a party at their nearly-communal apartment, nicknamed The Ranch, calling for each other in the mass of their darkly-lit peers and stopping only to flirt with boys (and other girls), or slurp up homemade alcoholic concoctions. Eventually they pour out onto the streets of Paris, gabbing and shuffling along the stone sidewalks in dangerously unstable heels. And then their day begins anew, as the girls make jokes about how bad their breath smells and how much they don't want to go to class; killing time before the next party.

What's remarkable about Chicks is that in many, if not most other hands, the portrayal of these girls would inevitably turn condescending if not all-out contemptuous. The other extreme possibility, of course, would be to glorify their carefree (which, as it turns out, is not so carefree at all) attitude and glamourize the girls as enviable and justified in their actions. Letourneur does neither--though if one we're splitting hairs, she'd lean towards the latter--and simply shows us a seemingly unbiased look, allowing us to draw what conclusions we will. Perhaps on some level she's even poking fun at the magnitude of panic older folks or parents in general give in to at the thought of their daughters behaving badly. In Chicks, while the path wavers and includes many seemingly unsavoury detours--by the end none of the girls are strung-out hookers or lying dead in someone's bathroom, as the natural conclusion an overprotective, "square" adult might imagine.

There have been countless movies, ranging from good-to-bad-to-offensive-to-naive-to-just-plain-stupid, by both males and females, that attempt to deal with a girl or woman's coming of age. Typically the girl experiences a turning point of some kind, and either seals herself off from emotion or lashes out as some manic sex fiend or perhaps cuts herself. All of these stories have validity, but they make Chicks' central conflict--or complete lack thereof--feel immensely more refreshing. Pam, Manon, and Lola are young, and partying, texting, and gallivanting around on the arms of romantic partners is not going to make or break their future. We spend all of our adult lives working and saving, and trying to do the right thing. Why not use those precious few transition years to...well, not? As Pam says of her avant-garde suitcases-attached-to-the-wall art piece, while laughing self-consciously, "it doesn't really mean anything."