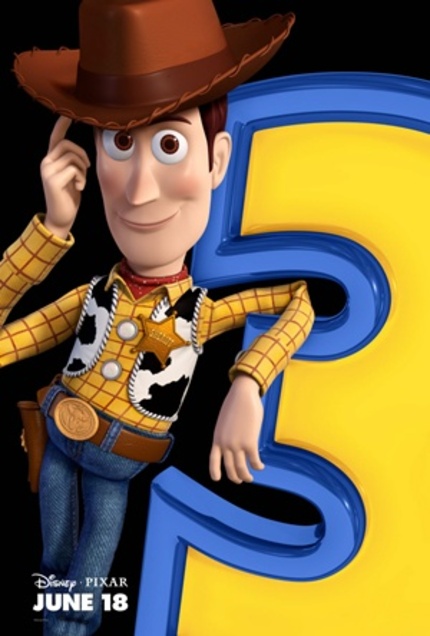 It's been said often, but it bears repeating: Pixar has an impeccable track record. They have never made a bad movie. Even the ones that aren't instant classic still rank as pretty darn good. There are those who are compelled to ask how long this can last. Fifteen years in, the answer should be obvious at this point. I'm now convinced that Pixar simply doesn't make bad movies. They are somehow, miraculously incapable of that.

Their debut, 1995's "Toy Story" was not just a cinematic game changer in that it introduced the world to feature length computer animation, it's also a deceptively powerful and wonderful work unto itself. Many feel that the 1999 follow-up "Toy Story 2" is a rare example of a sequel surpassing the quality of the original, but I've never gone quite that far my admiration of that film. Both are vibrant, colorful romps that tug at our heartstrings, offer greater truths to ponder, and ultimately make us laugh - a lot. But it is the original "Toy Story" that ranks unapologetically as my personal favorite film of the 1990s, beating out such contenders as "Pulp Fiction" and "GoodFellas". Likewise, I recently named "The Incredibles" as my favorite for the last decade. The pattern it not intentional, but it is telling, both of Pixar and of myself.

So, it may come as no surprise that I'm calling "Toy Story 3" the first truly great major film of this decade. It stands not only as absolutely worthy of the company of its predecessors, but as one of Pixar's finest films to date. It never rings false or feels forced in regard to matching the aesthetic of the world that was established all those years ago in the first two films. "Toy Story 3" is a seamless next chapter in a saga that is actually all about embracing childhood wonder, and about what it means to work through that time. This film takes it even further, striking at the very core of the beautiful, tragic inevitability of growing up. The story is both profoundly sad, and utterly hilarious.

Thematically speaking, "Toy Story 3" is an appropriately darker and emotionally intense film (parents of small children, take note!), built on a foundation of Victor Fleming's "The Wizard of Oz" - complete with a nod to the moment when Dorothy sees the image of her worried aunt while locked away in the Witch's lair. Like Dorothy, our heroes find themselves imprisoned in a frightening place midway through the film, wanting only to go back to a home where they may not be wanted. Uncertainty abounds - uncertainty that is directly linked to essential bedrock of the entire "Toy Story" series. Again, like "Oz", the whole thing may or may not be a "dream" - in this case, an imagined story - on behalf of the child at the core of it all.

Over the course of three films, we've come to know Andy as the vibrantly relatable modern-day every-kid. As a young boy, Andy played hard with his beloved toys, including the now-iconic cowboy doll Woody (Tom Hanks) and the ultra cool space ranger toy Buzz Lightyear (Tim Allen), endearing them with a myriad of personas and adventures, all straight from the unchained dreams of youth. When Andy's not around, the toys come to life in a whole different way, living secret lives and carrying out vivid adventures that thematically reflect the plights of their owner, and his various stations in life (the uncertainty of moving to a new place in "Toy Story"; becoming an older kid and the newfound independence which that brings in "Toy Story 2"). Now, in "Toy Story 3", debuting a long eleven years after the prior installment, Andy has practically aged in real-time, and is now on the cusp of leaving for college. That's code for truly beginning the process of growing up, whether it's desired or not.

When I saw the original "Toy Story", I was a college student myself, as well as a grown toy collector (primary preference: mint condition, out of the box) still living at home. I was in film school, and while the onset of Quentin Tarantino and the "indy revolution" that we thought we were on the brink of was setting that place on fire (the heat of which I myself was not immune to), it was the relatively quiet advent of Pixar, via Woody & Buzz, that moved me the most, in ways I still try to fully understand. There was none of the subversive irony or drug-fueled bombast that we college students were supposed to typically have our minds blown by. What "Toy Story" delivered was a solid buddy adventure, laced with Bergman-esque existentialism springing from an impeccable screenplay with the utmost attention to every detail, every step of the way. In short, it was filmmaking at its purest. The brand new, state-of-the-art computer-animation medium was, for me, almost beside the point.

Even then, I, like many, felt a kinship with young Andy - and also, I suspect, his creators within mighty Pixar. We are all enamored with the same basic things... After all, so much of filmmaking itself is essentially "playing with toys". And of course all of us inherently knew to love and respect our toys - to "play nice!", as Woody intones to Sid at the end of "Toy Story". Respect for history of the film medium is an important part of all this as well, as the series has referenced everything from "Star Wars" to Ingmar Bergman, epic myth to John Ford westerns - and so much more. Pixar has crafted this series, its crown jewel and universal calling card, in the mold and forms of the only the best, while imbuing it with tremendous originality and unique vision.

In "Toy Story 3", Woody and the toys find themselves accidently donated to a daycare center that is tyrannically run by a seemingly tender-hearted but power-hungry stuffed purple bear named Lotso Huggin' Bear, who is voiced by Ned Beatty and comes complete with his own tragic super villain origin story. We are also introduced to Ken (Michael Keaton), the hilariously shallow clotheshorse soul mate of Barbie (Jodi Benson). And then there is one of the saddest and most freakish characters in the whole series, the lumbering infantile enforcer, Big Baby. All these characters are part of the dark cabal of Sunnyside Daycare, an organization that aims to maintain their own comfortable existence in the older kids wing by ensuring that all new toys do their time in the brutal toddler ward. This does not bode well for Andy's former toys, all of whom have satisfactory moments in the spotlight. Throughout it all, I cried quite bit, and laughed even more - two things that most movies fail to ever make me do.

I suppose the fact that Andy himself is now college age is a realization of closure for me when it comes to my own relationship with "Toy Story", although life's uncertainties continue to abound nearly half a lifetime later, now with my own toy-loving, imaginative small children to consider. Which is why I for one am all the more overjoyed and grateful that Woody, Buzz and company are back for at least one more round to thrill us to infinity, and beyond.