IN THE HEAT OF THE SUN review 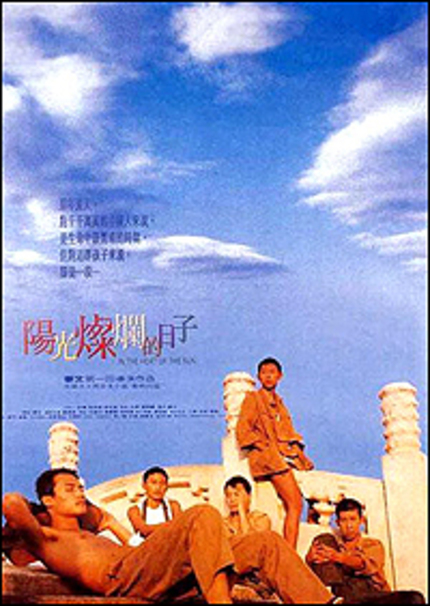 (Finally getting around to a review of this masterpiece for the ScreenAnarchy archives. With the recent announcement that his forthcoming Chinese Western Let the Bullets Fly will not be coming out any time soon, let's remind ourselves of the film that established Jiang Wen as one of the most accomplished directors working today in the first place.)

Jiang Wen's extraordinary 1994 debut In the Heat of the Sun (literally Days of Lush, Bright Sunshine) is the story of a child growing up in 1970s Beijing during the Cultural Revolution, but it's a dreamy abstract place perpetually awash in baking heat. The plot is a loosely connected series of offhand anecdotes built around the emotional cornerstones of adolescence - acting out, asserting one's identity, celebrating freedom, getting the girl. This is a film about memory, as in the way we remember something versus what actually happened. It's a man's memory of being a boy, asking himself; is this really how things were? And if so, how did the city I remember turn into the place I live today?

Beijing in the film lies virtually empty, with most of the responsible authority figures having been sent to work camps, drafted or otherwise shunted around the country. The hero Ma Xiaojun, or Monkey (Xia Yu, Waiting Alone, Electric Shadows, in a career-making first screen appearance) sees his enlisted father deployed away from home to calm the infighting between rival Communist factions then in full swing. Too young to serve his country, as Monkey grows older without anyone to redirect his youthful energies he flits from petty crime to gang violence to adolescent rebellion in what seems like the largest playground on Earth.

This isn't a film about youth run amok, or a country left in ruins. The Cultural Revolution left much of China in chaos, but we see the period as Monkey remembers it; an endless summer where he and his friends were free to spend their time on practically whatever took their fancy.

Schoolteachers can't control them, much less discipline them. Their parents are no better; Monkey's harried mother furiously chastises her wayward son, but it doesn't take. There's no-one to stop him wandering deserted apartment buildings and breaking into vacant homes.

It's all a game, an adventure to make up for Monkey's thwarted dreams of battlefield glory won fighting the Japanese. I wasn't a thief, he says, rifling through peoples' possessions with the same childlike wonder he displays while poring over his father's military curios. Much of the film turns on how, quite by chance, this unfettered curiosity leads Monkey to one particular apartment and introduces him - little by little - to the alluring Mi Lan (actress Ning Jing, now largely working in mainland television except for small roles in Divergence or Set To Kill).

Monkey and his friends end up discovering the opposite sex around the same time, with their little cadre ending up in yet more trouble as a result of conduct unbecoming supposed upstanding young citizens. Monkey's a man now, at least in his own eyes, desperate to join the action when the gang assert their supremacy on the streets; but unlike the other girls he knows, Mi Lan seems resolutely unimpressed with his new-found bravado.

In the Heat of the Sun is both fantastical, a rose-tinted look back at Mao's heyday, and startlingly naturalistic. Xia Ju gives an astonishing performance that deservedly netted him Best Actor at Venice (he remains the youngest ever recipient of the award). Whatever the attraction between Monkey and Mi Lan, its exact nature is never explicitly spelt out. Our hero's hormones are clearly swaying his thought processes - the cast are bathed in sweat or semi-clad for a great deal of the running time, and it's obvious Monkey sees Mi Lan as an object of desire - but part of his maturation stems from his slow realisation he's begun to feel something different for her than either directionless lust or puppy love for an older, wiser woman. 'If she's not your girlfriend, then what?' Monkey's angry father demands, and the boy's silence speaks volumes.

Ning Jing also contributes what is arguably the best performance of her career thus far. Though something of a limited range meant she recycled the temptress archetype seen here for several other roles, there's a depth to Mi Lan a brief summary of the character doesn't begin to hint at. She mocks Monkey, but never scorns him outright - while Xia Ju does a tremendous job of conveying adolescent frustration through body language and delivery alike, the film never suggests this is in any way laughable or pathetic. In some respects, both of them are just as lost; 'So you like talking with strange boys?' Monkey asks Mi Lan, when she spurns him for his (older) friends. 'You wouldn't talk to me,' she responds quietly. 'What sort of girl do you think I am?'

The theme of adults unable to provide any guidance keeps recurring beyond absent parents or powerless authorities, though never in any strongly politicised context. In the Heat of the Sun treats the Cultural Revolution not so much with reverence as a kind of detached, wistful nostalgia, never passing judgement on anything, merely observing. The camera remains purposefully aloof, the voiceover (from an older Monkey, narrating) mockingly self-aware, even upbraiding himself for making up a key set-piece he wished had happened.

Bad things happened at the time, but they were far away, irrelevant; not to the bigger picture, but to this particular memory of how things were. Yes, the film is being selective - 'All my stories take place in summer', Monkey tells us - but it picks and chooses what mattered to a generation who supposedly grew up like this.

In the Heat of the Sun does criticise this generation, but in a hauntingly oblique, roundabout fashion. Monkey's inability to successfully articulate his thoughts is part of a general theme of longing for that which remains just out of reach. He pines after Mi Lan, but he can't put his deeper feelings into words and his older, more worldly friends seem to be able to offer her something else he can't quite live up to, and it's this frustration that brings events to a head, one poor decision abruptly breaking the spell that's hung over the cast and winding up the film.

Part of its genius is how many ways this theme can be read; as longing to understand how things happened, why, or even trying to establish if they happened at all. 'True honesty is impossible', the older Monkey says, urging the viewer not to take anything he's said at face value. In the Heat of the Sun suggests regret, both for a vanished past and missed opportunities, but at the same time it resists pat moralising, neither extolling nor condemning China's history.

Only the brief, wordless coda under the final credits provides the flip side to two hours of hazy reminiscing, a glimpse of Beijing two decades on that seems almost alien, otherworldly, a dash of cold water which ranks up there for emotive power with the 'true' ending to Tsui Hark's Peking Opera Blues.

On the one hand the casual viewer can take the film as a languid, sensual, gently humorous character drama, and it's still a phenomenal piece of work viewed this way. The two leads are outstanding regardless of how much one attempts to read into their roles, and Gu Changwei's gorgeous, mellow-golden cinematography is captivating.

On the other, for the patient audience it opens into an elegiac tribute both to lost innocence and to memory in general; elegiac in that whatever the truth of things, these days are gone for good, and suspect impressions are largely all Monkey and his generation have left. They must be true, surely? 'My parents,' one internet commenter observes, 'who shared [a] similar historical experience with Jiang Wen, did not acknowledge this film as a proper description of their childhood when they saw it. 'It's too romantic to be true,' they said... However, they both admitted that the film did reflect their own fantasies of an ideal past.'

Without any kind of wider release in the West, released long before the boom in Asian cinema at the turn of the millennium, In the Heat of the Sun was largely restricted to a cult reputation among cinephiles. Tarantino praised it, but unlike his championing of Chungking Express and Hero this came to little in the long run.

Though lauded by critics as one of the greatest Chinese films ever made, with the original VCD, laser disk and even the Japanese DVD (without English subtitles) long since out of print, no legal way of obtaining the film at retail currently exists. Jiang Wen reportedly approves of its fanbase, but considers himself too caught up with current projects to oversee a re-release (at the time of writing he remains busy with post-production on the Chinese western Let the Bullets Fly). Outside academics, far too few people have seen In the Heat of the Sun, much less praised it as it deserves. For anyone with the slightest interest who gets the chance, it cannot be recommended highly enough.


In the Heat of the Sun

Do you feel this content is inappropriate or infringes upon your rights? Click here to report it, or see our DMCA policy.
Wen JiangShuo WangYu XiaXiaogang FengLe GengDramaHistory