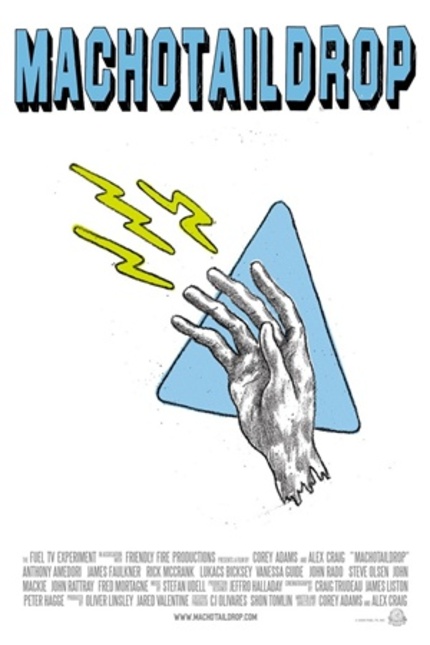 Walter is a kid who dreams of making it big on the pro-skateboard scene.  When his gold VHS tape of tricks is deemed worthy, he is summoned by The Baron to the headquarters of Machotaildrop Skateboards.  But Machotaildrop isn't just a manufacturer, it's a corporate machine with a near-feudal structure. It's a world where everyone is trying to stave off "the inevitable ravages of age that sneak up on you from behind like a clown with a cream pie" and Walter is too young and innocent to be wary of the deceits, foibles, and ambitions of his new "family".  He is oblivious to how they are employing his youthful charm as nothing more than a marketing tool.  When a planned Machotaildrop amusement park threatens to destroy the habitat of near-feral skater gang The Man Wolves, commercialized sport and skate-punk-primate anarchy are fated to clash, and Walter can no longer remain ignorant of how he is being used.

Admittedly, for a skate film it's light on the skating and new music, but it's delightfully high on the cheese-meter.  (The Man Wolves are especially entertaining.)  With script and characters that bring skate films of the '80s back to life (this isn't entirely a compliment, depending on your taste) Machotaildrop amps up the budget and production values, mixes in tiny dashes of Charlie and the Chocolate Factory and Strange Brew, and adds some skilled character actors to come up with a giddy coming of age tale.  It's not a masterwork, but for anyone who craves a slick dose of skate-film-silliness, it's a rare find.