Cinekid Film Festival Amsterdam: PONYO ON THE CLIFF BY THE SEA review 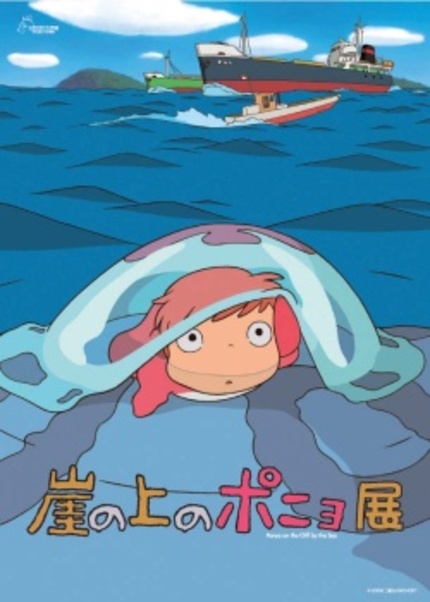 Today the 22nd Amsterdam Cinekid Children's Film Festival started with a bang: in the presence of the Japanese ambassador and the Dutch minister for Culture, Education and Science, the newest Hayao Miyazaki movie "Ponyo on the Cliff by the Sea" had its national premiere.
Well done Cinekid!

For this allowed me to see it NOW instead of next summer!
And I was happy to do so, for any new movie by Miyazaki is a treat indeed. I consider him to be a true genius. Active in the field of animation for more than 40 years, I have yet to discover the man having ever created a dud. Just look at the output he did for the studio he (co-) founded, Ghibli, in the past 25 years. Can any other director boast such a row of classics, unbroken by any lesser effort? On top of that he also wrote the "Nausicaä" manga, a science fiction volume worthy of any Hugo and/or Nebula in my opinion.

His newest movie is a personal riff on the "Little Mermaid" fairytale, about a fish falling in love with a human boy and wanting to become human too. Only that is where the comparison ends: Hayao Miyazaki is such a distinctive auteur that seeing one of his movies is almost like visiting a separate country for a holiday. And "Ponyo on the Cliff by the Sea" is very much taking place in Miyazaki-land, instead of the mind of Hans Christian Andersen...

A more elaborate description (with pictures!) follows after the break.

I'll try to keep things as spoiler-free as possible.

A capricious magical fish escapes from her father's submarine to explore the world, but gets stuck in a bottle. She is found by Sosuke, a five year old boy, who gives her the name Ponyo. It turns out Ponyo can speak and the two quickly become friends. But when monsters from the sea reclaim her, she and Sosuke become seperated.

Determined to return to Sosuke again, Ponyo uses some VERY strong magic to become a five year old girl, but in doing so she unleashes a power which threatens to destroy the world...

Speaking of starting with a bang: "Ponyo on the Cliff by the Sea" features a series of opening shots which are stunning in their ambition, complexity and audacity, especially if you consider that this whole scene is handdrawn. After pushing the limits of what is possible with animation by making clever use of computers in his previous three movies, Hayao Miyazaki decided that Ponyo would be Ghibli unplugged, so to speak: nothing but oldfashioned painstaking craftsmanship is used here, frame by exhausting frame. This gives "Ponyo on the Cliff by the Sea" a very distinctive look when compared to other contemporary animated movies.
But it's a gamble which pays off beautifully. Miyazaki's films always have had a touch of nostalgia in them, cgi or not, but this technique augments that feeling in a big way. After those insane first ten minutes, you at least will no longer wonder if things would have looked better using computers models...

And once again, Hayao Miyazaki shows his uncanny talent of realistically portraying the behavior and mannerisms of young children. Both Sosuke and Ponyo (when in human form) are instantly recognizable to anyone who knows any children of that age. The leaps of faith, of logic, the innocence but also the ruthlessness... it's all there on display, and it seems true. Like with "My Neighbour Totoro" the children make this movie a delight to watch.

Which is a good thing, because this time Miyazaki seems to be more interested in portraying moods, dreams and magic than in telling a coherent story. There are so many plotholes here it almost seems like they have been put there on purpose, like he decided that explanations are a hindrance when watching the adventures of a five-year-old and his magical girlfriend.

Sidetracking for a moment: Hayao Miyazaki has stated that the character of Sosuke was based on his own son Goro Miyazaki, from the time when Goro was five years old. This was a surprising mention, as Hayao and his son Goro (director of "Tales from Earthsea") have for the past few years been involved in a family feud, even involving the press in a very un-Japanese way. As part of this, Goro stated that Hayao hadn't been much of a father when his son was young, always being away from home. And the largest difference between Goro's Earthsea movie and the books was that in the movie, the protagonist kills his father who is beloved by all people.
Now with Goro being the model for Sosuke, does this mean that the model for Sosuke's father would be Hayao himself? During the movie the father is always away on work even when needed at home, and the way the little son copes with the situation is praised to the point that people treat Sosuke as an adult, even adding -San to his name which is quite unusual with such a small child. Could this whole movie be a more-or-less veiled apology from father Hayao to son Goro? Hm...

But nevermind these musings, as this sub-context neither adds nor detracts from the enjoyment the audience will have from watching this movie, be it young or old. Miyazaki's general themes are on full display here: man and the environment, the absence of a total villain, strong women... trust me, watching Sosuke's mother Lisa driving her car gives a whole new meaning to the word "girlpower"!!!
"Ponyo on the Cliff by the Sea" never gets too preachy though. There are amazing spectacles on display, yet also moments of tranquility. In short, it's a delight. As always with this studio, and certainly this writer / director.

If Hayao Miyazaki's whole line-up of movies is a rainbow, he just added a new colour to it with "Ponyo on the Cliff by the Sea". It is so distinctly different from all his other works, yet similar at the same time, that it makes it hard for me to say how it rates against the others. Is it better than "Mononoke", or "Totoro", or "Porco Rosso"? In some regards it is, in some regards it isn't. The environments on display are even richer than those shown in "Nausicaä", yet that movie has a much tighter structure.
In the end it just doesn't matter.
"Ponyo on the Cliff by the Sea" belongs fully in Hayao Miyazaki's resume, and as such it's as brilliant as the rest of that list is.

X's review.
Todd's review.
Peter van der Lugt's review over at GhibliWorld.com.
You can spot my index fingers solving a Ponyo video puzzle over at Peter's site, in his article on the opening of the Cinekid festival!
The Cinekid page.

More about Ponyo on the Cliff by the Sea