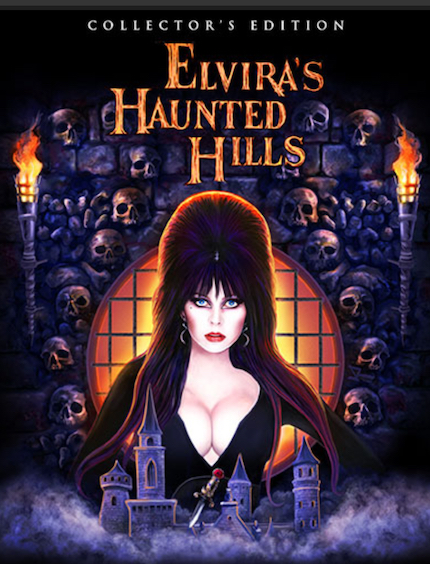 Though I was lucky enough to have seen the original Elvira film, Elvira: Mistress of the Dark, in theatres, the second adventure of the "Mistress of the Dark" escaped me in the early 2000s. Thankfully, Scream Factory (Shout! Factory's rad horror imprint) has us all covered with their brand-new restoration of Elvira's Haunted Hills.

The million-dollar production was filmed in Romania, where the money went far and where local crew built some incredible interior sets. As I watched Elvira's Haunted Hills, I discovered that the film was a spoof on the beloved Edgar Allan Poe adaptations by Roger Corman, starring Vincent Price --- particularly House of Usher, The Tomb of Ligeia, and The Pit and the Pendulum --- with a healthy dash of humor ala Young Frankenstein. [There's a particular low-angle shot that REALLY comes from The Tomb of Ligeia with some dead-on antique sunglasses worn by Richard O’Brien.]

Basically, Elvira (Cassandra Peterson) and her lady servant Zou Zou are on their way to Paris, where Elvira is going to perform in 1851, but encounter some spooky happenings along the way that detain them. Mainly, the weird scheming and antics of Lord Vladimere Hellsebus (Richard O’Brien) and his wife Lady Ema Hellsbus (Mary Scheer). You see, Elvira resembles the dead wife of Lord Vladimere Hellsebus, and let's just say that their marriage didn't end well.

There are further complications and subplots with the sickly niece Lady Roxana Hellsebus and dastardly dapper doctor, Dr. Bradley Bradley, played by a terrifically fun Scott Atkinson, who I was sad to hear passed away earlier this year.

Anyway, this comedy of errors was an absolute delight to watch, and a welcome one at that --- joy has been in short supply this year for obvious reasons and this madcap spoof was a wonderful, funny, escapist relief.

This 2001 film has been restored from a 4K scan of the original negative, and it looks incredible. Sound is also uniformly excellent, except for the strange inclusion of legacy featurette "Transylvania or Bust," as well as the interview with Richard O’Brien. The sound there is so muffled that I find it baffling why this was included as a special feature.

Similarly with the behind-the-scenes featurette "Transylvania or Bust," this video footage adds nearly no value, unless you like watching the backs of the crew's heads and watching things from afar. A partially amusing Romanian interview with Elvira is tucked among that footage, but the sound isn't great at all.

The rigid slipcase was a nice surprise in this collector's edition, and I enjoyed the new introduction by Elvira, who's always quick with a joke, as well as the making-of featurette. I was shocked to learn that Elvira and her producing partner (and ex-husband) Mark Pierson footed the bill for Elvira's Haunted Hills on their own. What you've gotta do to get a movie made...

In closing, Elvira's Haunted Hills is a wickedly good time, and I can't recommend it enough for your spooky season fun or all-season fun. To add this hilarious horror romp to your home video library, head over to Scream Factory's page for the film here.