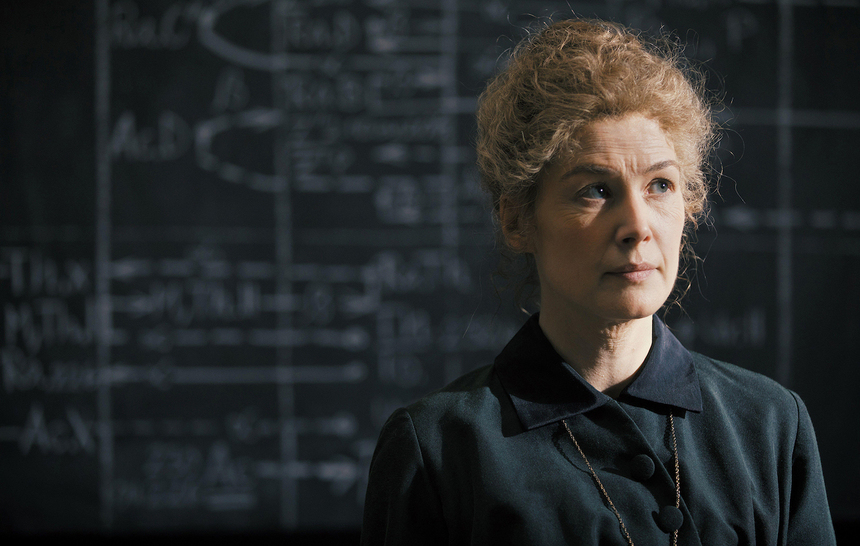 Biopics are not an easy genre to make, especially if your subject has some reknown. You want/need to show the important moments of their life, without making it look contrite or proverbially hitting the audience over the head with scenes that scream 'this is the important moment!'. You want to find a balance between their professional standing (which is presumably why their life is a biopic) and their personal lives (particularly for those whose work has been neglected or underserved). You want the audience to get to know the subject, know why they are important, and still make a creative, interesting, engaging film.

Radioactive does decent service to the life of Marie Sklodowska-Curie, one of the greatest scientists of the 20th century; but that's unfortunately about all it does. It has the production quality one would expect for well-financied film with stars about an important historical figure, and it shows the work she did, its importance, the barriers she faced, her 'difficult' personality and her own personal entanglements. And there are some scenes that seek to add some deeper meaning to her work, and her state of mind. But it does not rise above this to become more than just the coles notes of Marie Sklodowska-Curie's life.

Directed by Marjane Satrapi (Persepolis, The Voices), and based on the graphic novel by Lauren Redniss, it follows Sklodowska-Curie's life from the beginning of her collaboration with her husband, Pierre Curie, to her work helping on the battlefield during World War One. While Sklodowska-Curie did lead an interesting life, profoundly changed our understanding of science, and made discoveries that continue to be important today, it doesn't end up translating into an equally interesting film. While there are moments of inspriation in presenting Curie and her work, it strays far too much into a by-the-book retelling, which leaves little room for creativity.

We meet Sklodowska-Curie (Rosamund Pike) as a headstrong and frustrated young woman, once again having to fight for the tiniest respect from her peers in science, and again being rejected for both her gender and her radical ideas. Her future husband Pierre (Sam Riley) believes in her, and the film shows how their partnership lead to their discoveries. If, like me, you know little about Sklodowska-Curie, it's interesting to understand not only her thought process, but the physical labour of scientific discovery. There are the glass beakers and open flames as we've seen in film, but we also witness how demanding it was, the time needed to make these discoveries, to confirm results by performing the same test multiple times. That necessary meticulousness gives a greater understanding to how extraordinary her discoveries were.

Satrape, cinematographer Anthony Dod Mantle, and production designer Michael Carlin often give us the impression that we're watching a drawing come to life (likely trying to evoke something of the source graphic novel), with a radium green tone to help us be in that time period and the thing that held fast over Sklodowska-Curie's life. There are moments when we can catch Satrape's signature, when the poetry of science, the artistry and beauty that Sklodowska-Curie saw in what she was studying. Sklodowska-Curie might have loved her husband, but her greatest love affair was with radium. But even she would discover, and acknowledge, that this was a toxic relationship: radiation poisoning made her husband sick, and would eventually kill her.

Certainly Pike gives an excellent performance; Sklodowska-Curie, like women then and now, had to work twice as hard to be considered half as good, and moreover she knew her worth and wouldn't put up with anything less than her male counterparts. She lucked into finding a science and life partner who saw her as his equal even if the world treated him with higher regard, and she continued to suffer both as a woman as an immigrant to Paris, for not leading the 'perfect' life expected.

If you know only about Sklodowska-Curie's science, this is certainly a good insight into how those discoveries were made, what she had to put up with to get the recognition she deserved, and how the work changed her, and changed the world. It's disappointing that Satrape's style is not as strong as it could be, to have something that might rise above the standard.

Radioactive will be available on Amazone Prime as of July 24th.