Review: UNDERWATER, Monsters Stalk A Drilling Rig At The Bottom Of The Ocean 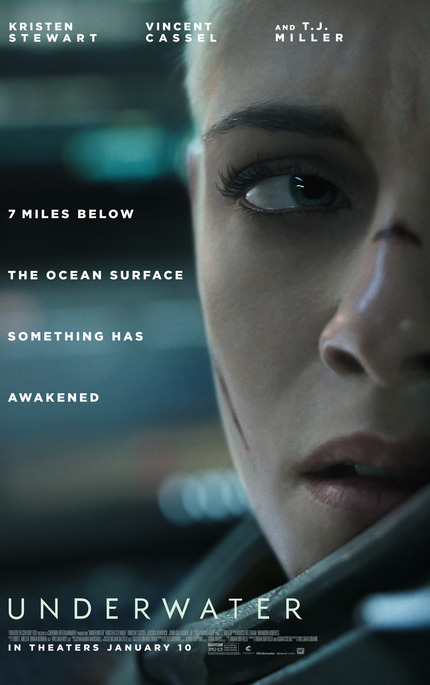 There's nothing quite as terrifying as the unknown. For centuries scientists and fiction writers have speculated about the mysterious realms beyond our terrestrial homes, both above and below the surface. There is something about the darkness of space and the darkness of the deepest abysses of the oceans that inspires some of the most creative and ambitious endeavors humankind has ever chosen to undertake.

Often, these endeavors are the result of pure human curiosity, the most noble of causes, but there's no denying that frequently it is the venal sin of greed that moves the gears of invention to innovate. Unfortunately for us, where there is sin, consequence can't be far behind. And sometimes the consequences are far beyond those we could've imagined, especially in the deep dark recesses of the Earth's most mysterious voids.

At the bottom of the Mariana Trench, the deepest known part of the ocean nearly seven miles below sea level, an ultra-advanced drilling rig is on the hunt for oil. Manning this rig are hundreds of (unseen) crew, all of whom are essential to keeping the thing running, but when an unknown cataclysm sends the underwater into complete shutdown, killing most of them, a skeleton crew must find a way to escape to the surface before they meet their own ends.

Norah, a sinewy Kristen Stewart, is a mechanical engineer determined to survive who ends up leading the last six survivors on a trek to find some kind of escape. Also up for the challenge are T.J. Miller (Deadpool), Vincent Cassel (La haine), Jessica Henwick (Game of Thrones), Mamoudou Athie (The Get Down), John Gallagher, Jr. (10 Cloverfield Lane), and Gunner Wright (J. Edgar), though as you can imagine, not everyone makes it to the end of this ride.

More than a typical disaster story, director William (The Signal) Eubank's Underwater is a deep sea monster movie that borrows liberally from the best in its genre to craft a riveting ninety-five minute adventure that takes full advantage of the mysteries of the deep to imagine what might be waiting for us in the places man was never meant to be. The result is a thrilling throwback that takes the claustrophobia of Alien, a shot of The Abyss, and a few fun extras that make for a pacey, creepy, and occasionally even scary experience.

Obviously modeled after Sigourney Weaver's iconic portrayal of Ripley in Ridley Scott's Alien, Kristen Stewart's Norah is a badass in a sports bra who becomes the de facto leader of the survival mission. She puts in a top tier performance as the mechanic tasked with saving what's left of her compatriots from the threats that hide in the murky depths. Far from the fawning breathless waif she often essays on film, Stewart's command of this role is excellent, and she delivers on her promise in a big way. She's capably supported by Vincent Cassel as the captain, though he is a bit underused in the film, and T.J. Miller who brings a bit of levity to the mix.

Equally, if not more important is the excellent work behind the scenes that really help create a world in Underwater that is incredibly immersive and just downright cool. The production and costume design teams in particular have done spectacular work, with the halls of the enormous drilling rigs strongly evoking the classic design work of Alien's Nostromo and even Sunshine's Icarus.

While the standard costumes for the fleeing crew members are pretty typically functional, for their excursions out of the pressurized ship and into the water, the dive suits are really funky and cool looking, a mix of modern spacesuits and old-school diving bell helmets. The kind of thing video game aficionados would be stoked to equip their characters with. Between those practical effects and the CG augmentations of the environments to deliver a feeling of crushing - like eight tons psi - claustrophobia, Underwater really hits its mark.

The monsters, though I won't say too much for fear of ruining some really great reveals, are also pretty uniquely terrifying in their own right. Though they are mostly computer generated - by necessity - the creatures are full of gangly, often disgusting surprises, including a big one that will put a gigantic smile on a lot of faces.

It's often said that there's nothing new under the sun, and it turns out that while that same statement might be true under the sea, sometimes taking elements tales already told can be just as effective as crafting a new story from whole cloth. Underwater is a well-paced retelling of alien terror at the bottom of the sea, with Eubank and Stewart confidently steering the ship. Horror fans will definitely eat this one up, if it doesn't eat them first.

Do you feel this content is inappropriate or infringes upon your rights? Click here to report it, or see our DMCA policy.
Kristen StewartTJ MillerVincent CasselWilliam Eubanks