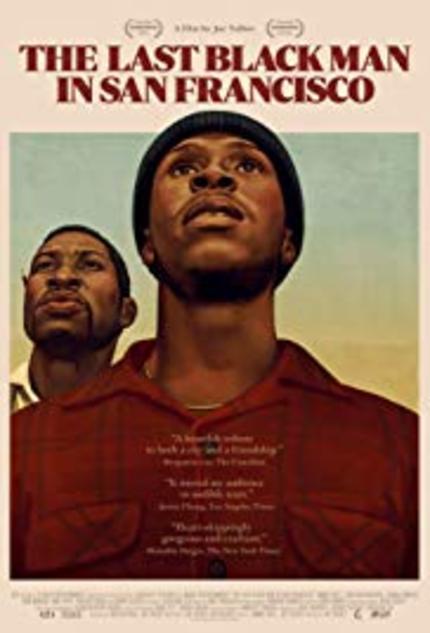 Indeed, a reflective city-centric drama that can effortlessly touch bases with its rotating themes and provide a contemplative platform of silent alienation that perceptively makes for a stimulating, revealing showcase is a rarity. Race, gentrification, housing crisis, rising economics, childhood reminiscences, a sense of belonging, a picturesque and soulful homage to the Bay Area--all are explored and referenced masterfully in the unconventionally poetic, piercingly observant, and thought-provoking The Last Black Man in San Francisco.

Co-writer/director Joe Talbot and fellow scriber Rob Richert delve into the untapped psyche about the hovering confines of displacement and the adage that one may not be able to go home after all. Importantly, The Last Black Man in San Francisco emphasizes the on-going struggles for an idealistic America that is so elusive and foreign to the Average Joe not being able to benefit from its inclusion. In many ways, Talbot's (a proud, native San Franciscan) first feature film is a lyrical love story for the filmmaker that actively captures the essential nuances and nostalgia of a revered city immersed in its commonality, spirituality, mystique, and to a certain extent some existential angst.  Whether acting as a sensitive drama, urban buddy film or West Coast-flavored fairy tale The Last Black Man in San Francisco is a beautifully shot meditation on a heralded hometown turned into a pricey Fantasyland for those that can no longer afford to be part of its marvelous mosaic.

Nursing home attendant Jimmie Fails (the actor shares the same name of his character in the film) still embraces deeply fond memories of his childhood home--a Victorian built by his grandfather in the Fillmore district. Unfortunately, Jimmie's treasured property from yesteryear (as well as the whole neighborhood in general) has now been gentrified and the cost of living is outrageously expensive. The following years since has not been very kind to this section of the city that once was considered the cultural hub of the African-American Experience. The only thing cheap and affordable about Jimmie's yearning for his old place currently is thinking about getting near it again--something that he actually pulls off frequently.

Jimmie, along with his playwright/artist/fish market worker friend Montgomery "Mont" Allen (Jonathan Majors, "White Boy Rick"), takes liberties in visiting his childhood place by innocently touching up the property a bit as an affectionate gesture grounded in devotion. The white couple that now reside in the valued home are not too thrilled with Jimmie and Mont providing the unwanted decorative enhancements to their home. Eventually, the exasperated couple move out leaving Jimmie's childhood home unoccupied.

Thankfully, this is the golden moment that Jimmie Fails was looking for but realistically...what next? How can Jimmie reclaim a cherished house that was so near and dear to him when this desired domicile is totally out of his financial league? Whatever the case, Jimmie realizes that if he ever can come to terms with securing the former family home this would result in a tremendous resolve to piece together the harmony of completeness regarding the restoration of his private homelife memories, loved ones' approval, the neighborhood vibe, and of course...his beloved version for his city of San Francisco.

Right now the bleak existences of both Jimmie and Mont make it almost impossible wishful thinking at this point to ever get their eager hands on that dream-like Victorian awaiting their reunion after so many decades. The guys--both blessed with artistic and creative leanings--are residing with Mont's sickly grandfather Allen (San Francisco-born veteran actor Danny Glover) in a garage attached to his house in the working class section of the Hunters Point district. In holding down honest but meager jobs that merely keep them barely financially afloat the chances of ever seizing the ownership of Jimmie's aforementioned childhood seems decisively futile and understandably so.

The Last Black Man in San Francisco cultivates a variety of wandering feelings about all sorts of emotional residue that resonates in a city backdrop that acts as another partnership to the special on-screen duo of the fictional Jimmie Fails/Mont Allen combo. The film astutely defines the concept of not just how much the deterioration of Black America has taken place in the posh playground of San Francisco's exclusive locale but the fact that other demographics are having a difficult time claiming a booming Bay Area that has outpriced and outgrown them as well. San Francisco/Oakland has always been the go-to location for casual background elegance and malaise in countless films. However, in specifically targeting the black-themed hard times within the Bay Area realm The Last Black Man in San Francisco could easily be a companion piece for last year's riotous Boots Riley-directed freaky fantasy Sorry to Bother You (which also featured Bay Area native son Danny Glover)--another intimate showcase detailing a garage-housed young black man's love-hate relationship with his financial flawed future that gently skews his admiration for a costly hometown he can only reach through the recollection of yesterday.

Talbot instills an infectious spirit as well as a surfacing frustration for his protagonists that are the solid fabric for the city they salute but in return will not necessarily acknowledge them from a monetary standpoint. The special friendship that exists between Fails (actor and character) and Majors's Mont is cemented in mutual respect and meaningful male bonding. They are kind and not outrageously flashy or furious--they simply feel left out of their scenic surroundings that have seemed to somehow pass then by without warning. The friends enjoy their book reading, movie-watching, and skateboarding through a vast city populated by diverse personalities that probably share their predicament of alienation in a San Francisco too rich for their minimum wage blood. Talbot and cinematographer Adam Newport-Berra capture the vibrancy of the sights and sounds that serve as Fails's and Mont's charming city scope of hope and optimism. Additionally, the local San Francisco flavor is considered as Talbot ensures that the city-related mentionables are included from the filmmaker's recruitment of personal friends and random San Franciscans, Bay Area celebrities to pop cultural signature songs such as Scott McKenzie's classic 60's Summer of Love tune "San Francisco" as aptly performed in the film.

Refreshingly inviting and pleasingly insightful, The Last Man in San Francisco is a thoughtful character study saddled in grace, truth, and unassuming heartbreak that should soundly register with anybody that had to question about where their true homebase is both in the unfulfilled heart and in the vacant state of mind.

Do you feel this content is inappropriate or infringes upon your rights? Click here to report it, or see our DMCA policy.
Danny GlovergentrificationSan FranciscoThe Last Black Man in San Francisco