REVIEW: Ma is not very nurturing in its mediocre menacing motherly instincts 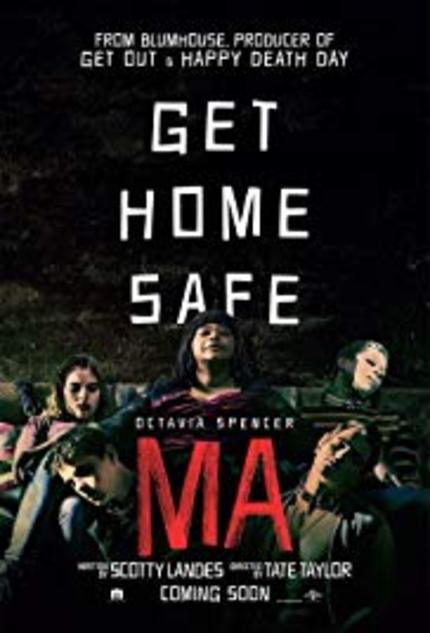 Mother Nature has a stormy forecast of hackneyed horror cloudiness on the pseudo-suspenseful radar courtesy of director Tate Taylor's sketchy macabre maternal thriller Ma that cryptically encourages its youth to "get home safe". On paper, Ma should be elevated from its generic goosebump DNA given the promising premise of its potential high-wire, shifty shenanigans.

Taylor enlists his Oscar-winning The Help  supporting actress Octavia Spencer as his Ma leading lady in lunacy named Sue Ann whose unhinged antics in a small Ohio town becomes a cautionary tale for the unsuspecting teens unaware of the middle-aged woman's escalating madness. Although the cinematic reunion of Tate, Spencer, and fellow Oscar-winner I Tonya's Allison Janney in a bit part (she was also in The Help and was Spencer's temporary co-star on her TV sitcom Mom) rings of some reassurance for these collaborators this schmaltzy showcase of surrogate Mommy Meanest never materializes beyond its cheapened B-movie transparent terror.

Ma flutters awkwardly between a campy creepfest and slight psychological thriller without lending any considerable heft to either component. Taylor and screenwriter Scotty Landes created an assumed live-wire landscape riddled with missed opportunities where a shady mature black woman's corruptible influence on mostly white charges within her realm could have made for a sardonic conflict of interest as it would have presented an intriguing social commentary flipped on its biting backside. However, the flimsy trajectory of the film feels mechanical and familiar and never really taps effectively into its inherent cynical silliness. Ma pretty much erratically juggles its various levels of horror, mystery, and suspense but sadly cannot fortify anything substantive to generate any frenetic force behind these featured concepts.

Spencer's Sue Ann leads a rather lonely existence as a veterinary assistant. She soon becomes an older buddy to the local kids in the area that serve as her instant companions. Hence, Sue Ann comes off as a cool "mother" figure because she allows them to hedonistically do as they please within her remote country home. Sue Ann is the shady supplier of alcohol and encourages the sordid party-hearty atmosphere in her basement. Finally, Sue Ann basks in her hero worship role as the group of youngsters gravitate to her like mosquitoes around a blood bank.

There is a notable youth that prominently figures into the inevitable mayhem in the form of Maggie (Diana Silvers). Maggie may be the new kid on the block but her working-class casino waitress mother Erica (Juliette Lewis) is originally from the area. Maggie's crush on Andy (Corey Fogelmanis) is definite. Andy's father (Luke Evans) was a hotshot in his heyday and now has on his arm the town tart Mercedes (Missi Pyle). Interestingly, the parents of these wayward kids are the same adults that spent their high school years with the dejected Sue Ann. Could Sue Ann's path of poisonous fun and frolic for these youngsters be the ultimate payback for the neglectful parents that treated her shabbily in the past? Are Sue Ann's former classmates from yesteryear responsible for her unstable mental health that persists currently?

Overall, the Maggie and her peers are grateful yet curious about how the irresponsible Sue Ann has green stamped their wild behavior at her house with all the drinking, smoking, and other recklessness that is taking place in their company. The growing reputation concerning Sue Ann's free-for-all debauchery at her place spreads until it attracts countless more young people feeling the need to let loose and soak up the raucousness. Sue Ann may have started out as the friendly savior to give permission for the ill-advised foolishness to unravel among these kids. Still, the Clearasil crowd do not view the twisted Sue Ann as their age-appropriate equal nor should they--this is something that clearly does not sit right with the unbalanced oldster. Gradually, Sue Ann's desperation for her bid as a wannabe honorary "kid" is revealed as her dysfunction and demons start to emerge. How dare these young ingrates dismiss her as an old fogey after the destructive good times she has handed them without question?

Had Ma possessed some deepened eerie thrills then this synthetic horror vehicle would have resonated more soundly in manufactured outlandishness. Indeed, Spencer--who headlines this fruitless frightfest--is up to the task of mirroring a wacky woman coming undone as her warped world closes in without warning. Spencer's Sue Ann is out of touch in more ways than one and that is a noted revelation. Nevertheless, the combination of the unintentional laughs and lackluster screams leaves this delusional drama disconnected as it undermines a nutty-spirited performance by Spencer. As the proposed property of Blumhouse Productions, one would think that Ma would be a bit more engaging in its constructive creeps. But it never seems to rise to the occasion of its exploitative surface while opting for mediocre menacing flourishes.

The typical teenagers in Ma are the incorrigible misfits that one would not mind subjecting to Jaws' dinner plate instead of being the targets of psychopath Sue Ann's wrath. The aforementioned Janney is one of the few bright spots in the movie as Sue Ann's off-kilter vet boss. The tail end of the film demonstrates its chilly clutches but unfortunately does not compensate for the choppy build-up leading to the creepy climax. Distracting editing, cliched characterizations, lazy-minded jumps and jolts, and a wasted turn by Spencer's alter ego's off-the-wall tendencies should land Ma in a numbing nursing home full of empty scares.