REVIEW: J.T. LeRoy is a literary letdown given the big screen treatment in utter confusion 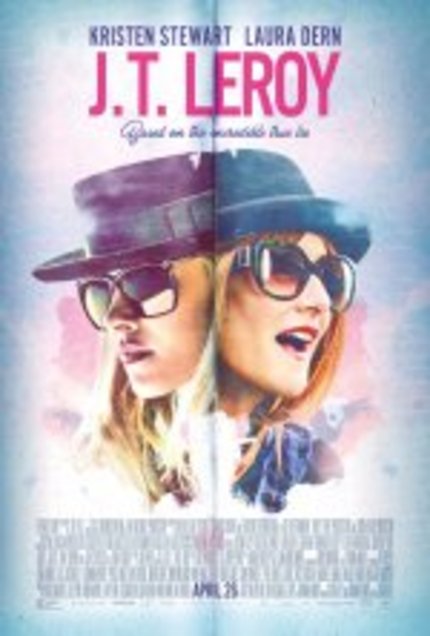 Sometimes films that are based on true stories get lost in translation due to how the story is being told on the big screen. Now in all fairness, some movie adaptations of novels or biopics of noted personalities are unapologetically convoluted because the real-life subject matter for which the material is based upon mirrors that same convolution. Look, occasionally a film's questionable theme can seem cockeyed if given the chance to be digestible by other factors that can overshadow the flaws.

Of course, when a film boasts two capable leading actresses in Laura Dern and Kristen Stewart embroiled in a tasty tale of misleading identity, hatching hoaxes, and launching literary deceptions then one would not expect anything less than stellar in this given percolating premise. In citing another film about womanly-based literary fraud wrapped around a sense of disenchantment, the Melissa McCarthy-starring vehicle Can You Ever Forgive Me? was hypnotic and intriguing because the audience knew how defeated, dark and desperate her character was at heart with her manufactured presentation of a hoax embedded in creation dishonesty. Too bad this cannot be stated about another showcase attempting to mix feminine-written creativity with the falsehood/dysfunction of identification in Universal Pictures' J.T. LeRoy.

Co-writer-director Justin Kelly concocts what could have been a promising exposition of the misguided yet meaningful creative process of a questionable woman's false literary undertaking in the disjointed drama J.T. Leroy. However, Kelly's ("Welcome the Stranger", "I Am Michael") uneven narrative cannot shake off the mounting confusion and clutter to fortify the contemplative chaos of the featured women the film thrives for yet awkwardly presents to the forefront. The adaptation of Savannah Knoop's (played in the film by Stewart) memoir never has us completely invested in the psychology of her elaborate charade as she poses as her sister-in-law Laura Albert's (Dern) heralded made-up literary persona J.T. LeRoy. One would think that the authenticity of the script co-written by Knoop (along with executive producing) would make for better insight of her personalized dealings. Sadly, the bizarre scenario displayed in the scattershot J.T. LeRoy just does not register.

Savannah Knoop arrives in California to stay with her brother Geoffrey (Jim Sturgess) and his wife Laura. Soon, Laura lets out a juicy secret--she is the real author of LeRoy's notable books and has assumed the writer's hidden identity through a series of interviews. However, the concern of LeRoy's actual existence is starting to come into play by the public as suspicions are tossed around aimlessly. Suddenly, the worried Laura reveals a convenient revelation to protect her creation of J.T. LeRoy (a.k.a. Jeremiah Terminator LeRoy)--she asks Savannah to pose as the acclaimed writer. Laura feels that Savannah is the right fit physically and soulfully to assume the androgynous look of the mysterious scriber. For public relation purposes, Savannah's masquarading as LeRoy could help considerably for various in-person appearances and other marketing outlets.

Intrigued and curious, Savannah accepts her sister-in-law Laura's challenge to walk in the fictional shoes of J.T. LeRoy. Feeling rather liberated by this celebrated identification, Savannah actually enjoys parading around in this new persona. It feels even more comfortable for Savannah donning J.T.'s being because in many ways she has not quite figured out who she is or what she wants being her own individual. Savannah's embracing of J.T. LeRoy's identity is also beneficial when it factors in the presence of European film star Eva (Diana Kruger). Eva yearns to get close to Savannah in hopes of snagging the rights to LeRoy's work. In the meantime, Laura is feeling regret for not basking in her literary creation's success as the revitalized Savannah is the fortunate face of the excess limelight and overall credit. Naturally, the sisters-in-law shift through the tension and turmoil as the whole J.T. LeRoy ruse overwhelms their previous existence in harmony.

J.T. LeRoy puts forth a muddled screenplay that never quite supports the accountable highs and lows of the harried women in the middle of the so-called media storm. As the co-conspirators involved, Dern's Laura Albert and Stewart's Savannah Knoop rehashing of the publicity stunt pretty much goes through the arbitrary motions without much introspection. There is never a convincing emotional or psychological link to pinpoint Dern's troubled author as she hands over the reigns to Savannah's portrayal of the bisexual J.T. Consequently, this true-life drama feels mumbled and should not stagger considering the artistic caliber of Dern's and Stewart's involvement as the hoaxing perpetrators in the hot seat. Writing under a titular pseudonym while detailing the ever-growing angst of a vulnerable teenage boy has some suspenseful merit but J.T. LeRoy only accomplishes its misguided mission as being a boorish misfire.

There is an alluring weirdness and indescribable madness to the whole proceedings in J.T. LeRoy but the sluggish Kelly-Knoop collaboration fails to mesh everything together in order to enhance this story's glorified strangeness. The frustrating aspect of Kelly's narrative is that the players involved in the paranoia--including the supporting Courtney Love's cynical Hollywood producer and the opportunist Kruger's opportunist European artist--never seem to illustrate any kind of coherent reasoning for why these foul folks had the motivation for the peculiar inclinations regarding the entire J.T. LeRoy circus. Also, J.T. LeRoy does not retell the story any differently or distinctively with authority than what is already known. Why not add anything colorfully interesting or absorbingly outside the box to offer something fresh and compelling to the familiar material?

The I.D. crisis in J.T. LeRoy is just not riveting enough to be unmasked at the expense of alienating feminine fragility.

Do you feel this content is inappropriate or infringes upon your rights? Click here to report it, or see our DMCA policy.
hoaxJ.T. LeRoyKristen StewartLaura Derntrue story