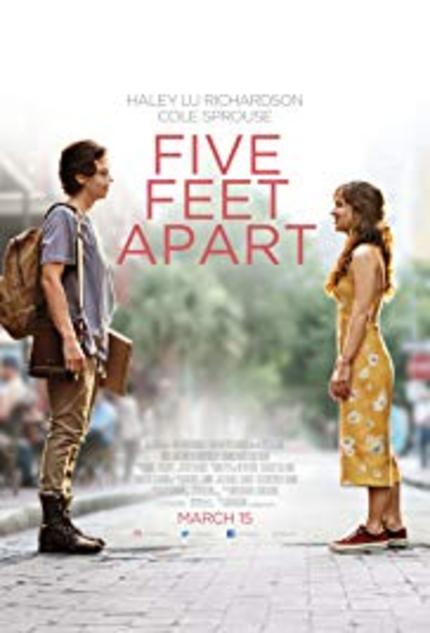 One can never have enough treacly teen romancers that dutifully pander to their youthful fanbase, correct? Director/producer Justin Baldoni's two-hour saccharine-coated sudser Five Feet Apart does not miss a sentimental beat when conveying its mawkish message about compromised young love at the menacing hands of terminal illness. The Clearasil crowd--at least those that will be enticed by Baldoni's melodramatic muck--should feel rather manipulated by the film's ailing version of Romeo and Juliet. Themes of teenaged pretty people, the "fill in the blank" type of sickness at hand, and an unapologetic attraction between said inflicted youngsters make for the  foundation of the teary-eyed tendencies in Five Feet Apart.

Recent teen love stories regarding romance and illness such as 2014's The Fault in Our Stars, 2017's Everything, Everything and this year's Then Came You do indeed tug at the heartstrings. For the most part, this distinctive genre tries to tap into the teen tragedy of the romantic heart while trying to reinforce three-dimensional angst from the vulnerable standpoint of nagging youth-oriented growing pains. Certainly there is a market for these indigestible young folks' big screen soap operas that pop up occasionally for fanboy/fangirl consumption. However, transparent dreck such as Five Feet Apart always has a well-meaning pulse bidding to sing the transparent praises of its synthetic dramatization. The problem remains that some of these teenie-weepie offerings conjure up contrived sap and the phony-minded emotional edginess has all the compelling poignancy of a broken charm bracelet.

Five Feet Apart is based upon the novel by Rachel Lippincott. Baldoni's by-the-dots direction and screenwriters Mikki Daughtry and Tobias Iaconis compile the mush factor methodically as the intricate details of the featured disease-related symptoms is put on full display in all its queasy abundance. Thankfully, this is the only genuine element to stomach in Five Feet Apart...moreso than the canoodling cravings of its leading sickly, lovestruck tandem in this misguided melancholy mash-up of teen treatment and turmoil.

The tender but turgid tale introduces us to the hospitalized yet highly-spirited 17-year old Stella Grant (Haley Lu Richardson) whose infliction with cystic fibrosis cannot stop her from an outlook of positivity. Stella goes about her merry business in the ward by keeping busy with her heralded hobbies that include making CF videos, catering to her what-to-do lists, and practicing yoga. She is very hopeful that a lung transplant is in store for her in the immediate future. Stella is criminally spunky and a convincingly likable lass.

However, Stella's world would change gradually when she meets fellow CF sufferer Will Newman (former Disney Channel heartthrob Cole Sprouse). Unlike Stella, Will is rebellious and simply does not want to conform to the rules of the hospital. Predictably, Will's obstinate bad boy is pitted against Stella's easy-going good girl. Apparently, Stella is the only feel-good influence that can motivate the brooding Will to take his meds and conform to the other expectations of the facility. The opposites attract pairing soon inspires the deep affection that the now lovey-dovey twosome faithfully harbor for each other. It appears that the love is real for the devoted duo.

Inevitably, the Stella-Will romance cannot be fully realized courtesy of their restrictive CF disease. Specifically, the hospital's concerns are that the high risk ramifications of Stella and Will getting physically close to each other would definitely cause deadly infections thus worsening their already fatal conditioning with the dreaded illness. Hence, the film's title echoes the mandatory stipulation--they must keep away from each other at least five feet in spacing if they do not want to suffer further crucial consequences. But Stella and Will are sick-bound soulmates...defiant teens that are determined to see things their way and feel the way they need to feel.

Although wrapped around in the sweetness and sacrificial sorrow of its corny convictions, Five Feet Apart is a conventional youth-inducing vehicle that tritely mopes and gropes at the manufactured medical malaise of its tortured teens. The thinly veiled material is more insufferable than involving. Richardson's Stella serves resoucefully as the upbeat "princess of pain" as she internalizes her sickened fate by looking at her psychological glass of appreciation as being half full instead of half empty. On the other hand, Sprouse's Will is the downer of the kissy-minded kids as his cliched rule-breaker drags this already hobbled exposition.

Baldoni's weepy wonder should instinctively keep those mightily aware about five feet apart  in wanting to avoid this malpractice of manipulation at the box office.