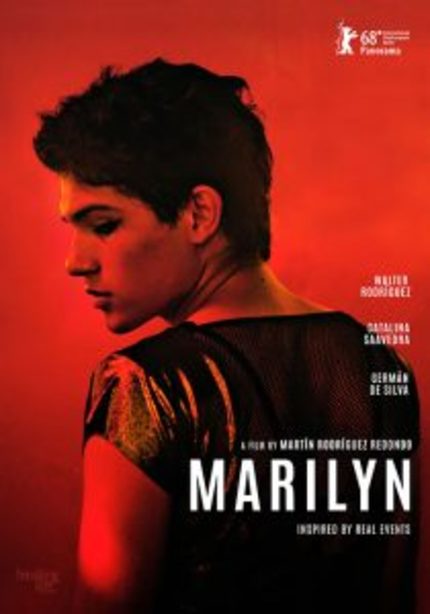 Co-writer/director Martin Rodriguez Redondo's reflective and probing Argentine LGBTQ coming-of-age tale Marilyn incorporates all the circulating doubts, personalized strife, and overall contemplation about youth-oriented uncertainty, experimental sexuality, and loss of self-identity. Indeed, Marilyn has its saggy moments in orchestrated sentimentality but the film's gripping essence in conveying the pressures of a gay teen tormented by directional signs of angst-ridden burden does have its affecting, dramatic impact. Redondo's creative heart is in the right place in terms of delving into the tortured soul of a confused homosexual youth wallowing in his daily turmoil.

Based on true accounts, Redondo and fellow screenwriters Mariana Docampo and Mara Pescio tell the sordid story of rural farm boy Marcos (played with conviction by Walter Rodriguez) residing on dry cattle farming land with his family. Marcos merely exists as he goes through the labored motions of carrying out his farming duties as a ranch hand. Father Carlos and brother Carlitos (German de Silva and Ignacio Gimenez) do much of the heavy-lifting when tending to their business at hand. Marcos is close to his homebound mother Olga (Catalina Saavedra). Together, this family are stuck in the trenches working an unforgiving, rough land in unbearable heat.

As with most fathers, they want the very best for their sons to continue on and assume the leadership role within the family foundation. Certainly Carlos had high expectations for the quietly alienated Marcos. First and foremost, Carlos imagines that proper schooling is the tool for his younger son to excel and eventually take over the reigns in overseeing the family's future welfare. Basically, Marcos needs to step up to the plate and adhere to his daddy's ambitions and goals earmarked for him. Now is that asking too much for a struggling father to empower his son?

Little does Carlos or the rest of his family realize Marco's hidden secret--his penchant for admiring and dressing up in his mother Olga's clothing. The exploration of Marco's sexuality is deep and desired for the gay teen bent on discovering his true self. Marco's gender-bending antics become more prevalent following the collapse of saddened events about to unfold. First, father Carlos's sudden death is a shock to the family unit. Secondly, the fatherless status leaves Marco and his remaining loved ones strapped financially. Thirdly, how can Marco justify his gay lifestyle to his mother Olga without risking scorn and rejection in her eyes? After all, it was Olga who unwittingly fostered Marco's inclination for playing dress up and embracing his surfacing homosexuality. Plus, toiling on a worn-torn farm is not exactly what floats Marco's boat either.

The torment becomes overbearing for Marcos but he does find some resolve amongst the commotion and conflict. For starters, Marco is liberated when a town carnival allows him to strut around as an enticing, spry female in all his exuberant glory. He even gets romantically attached to local hotshot Federico a.k.a. "Fede" (Andrew Bargsted). Finally, Marcos feels loose in his preferred skin but ultimately it will cost him some major heartbreak in the long run.

Marco's wake-up call to reality hits home when the societal circles constantly remind him of his "deviant" existence. For instance, Marco is cruelly referred to as "Marilyn" by neighboring bullies that get a twisted kick out of harrassing what they perceive as a walking sexual punchline. The brutality of rape is brought to the forefront. The affectionate connection that Marco/Marilyn enjoyed with Fede ends up testing the unstable boudaries of our lead protagonist's diminishing sanity. Additionally, Carlito's biting indifference and abandonment from Marco left a piercing hurt inside the disillusioned younger sibling.

Marilyn occasionally demonstrates an unevenness concerning its varying overtones from the poignancy of a chastised, impoverished youngster in sexual transition to a heavy-handed drama harboring the ugliness of ostracization. Still, Rodondo is able to underscore his viably observational and piercng narrative with revealing unkind truths that beleaguer this particular boy's tainted psyche. As Marco, Rodriguez displays a soul-searching performance that easily triggers the suffering and twitchy anxieties of a detached adolescent bombarded by the automatic shame of others regarding his sexualized choice of expression. Saavedra's Olga is a nuanced turn for a mother udergoing her own brand of silenced agony resting on her anguished shoulders. One gets the sense that the wounding process for these Argentine lost souls are indefinitely crippled in futility.

Regardless of the confines of poverty-stricken happenstance or youthful same-sex promiscuity, Marilyn is a cautionary tale about life's unassuming gaze at one conflicted boy's ever-lasting malaise gone unchecked, unfiltered, and unchallenged.