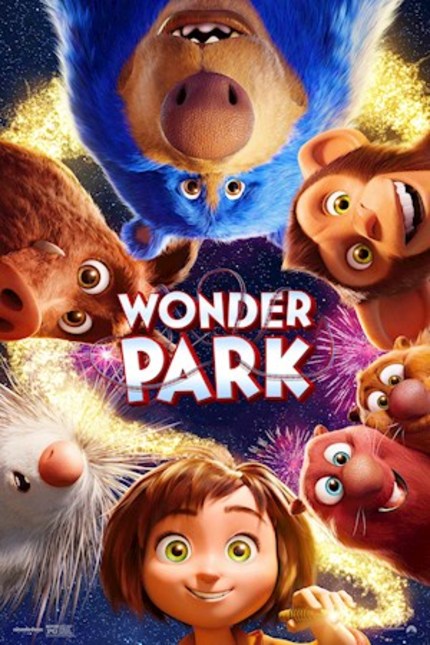 It sort of feels sacrilegious in browbeating what appears to be an innocuous children's animated film about a young girl's wild imagination to offset some personalized pain as she pals around with fuzzy animals in a surreal amusement park. This is indeed the foundation for the flimsy kiddie fantasy Wonder Park that trivializes the instilled grief of a youngster while paddling this trite treat with bouncy beasts and an A-list cast of voiceover artists contributing to this flappy farce. Predictable, lazy-minded, manipulative and tediously annoying, Wonder Park is a forgettable tots' tale that tries to mean well but is as inviting as a closed carnival attraction under repair.

Although openly energetic and pushing the right buttons when highlighting the usual trapping of an escapist animated fable, Wonder Park feels rather clumsy in its bid to parlay a young girl named June's (Brianna Denski) odd adventure into a head-scratching stretch of creativity and imagination to mask away some embedded conflict. This amiable puff-piece for the youngster crowd may be appealing for its suggestive sweetness, gimmickry of talking animals, and the overall joy of carefree craziness that besets the realm of a colorful journey. However, this mishmash of production is deemed aimless. Also, it is strangely borderline as being dismissive and insulting in its misguided message about handling youth-oriented crisis. Inexplicably, the aforementioned voice work from such notable names as Jennifer Garner, John Oliver, Kenan Thompson, Mila Kunis, Matthew Broderick, and Ken Jeong brings nothing particularly excitable to the table in this toothless, junior-oriented romp.

June and her supportive mother (Garner) are instrumental in inventing a magical amusement park known as Wonderland. Both her mother and father (Broderick) encourage their daughter to think vividly about her creations. Everybody seems to indulge in June's imaginary fun playground where Wonderland comes to life as it is being run by ridiculous talkative animals. Additionally, others involved in this merry mix are the "chimpazombies" that insist on causing further turmoil within this playful haven. Still, June seems to be in a good place...or so she thinks until the unthinkable happens.

Weirdly, the movie takes a tricky turn for the worst when it is revealed that June's mom is suddenly diagnosed with a serious illness. She leaves home for continued treatment and poor June is left understandably devastated. Feeling distraught and helpless, June decides to abandon all her creative consciousness concerning Wonderland. So the little depressed diva shuts down emotionally. Geez, talking about an awkward curveball to corrupt a seemingly feel-good, kid-friendly concoction! The tactical decision to sabotage this paper-thin PG-rated diddy and turn it into an unexpected downer is utterly inexcusable. It is safe to infer that the impressionable kids and their astonished parents/guardians are not going to be prepared for such a questionable switch in its dreary overtones. What the bleep?

The rebellious June reacts instinctively by running off only to coincidentally come across the real-life dilapidated Wonderland in the woods. The garrulous animals stationed there express their fears to June and plead for her intervention to save them from potential danger. Can June overcome her malaise about her jeopardized mother's medical uncertainties to conquer the darkness that hovers over her and the beleaguered beasts she must protect? Can this girl's dueling fantasies and realities work side-by-side to rescue Wonderland from its potential unfortunate fate?

Ultimately, Wonder Park is a scattershot mess. This whole animated feature is anchored in the meandering makings of its mawkish makeup. The boorish approach to extolling the virtues of youth-oriented creativity and imagination is needlessly misguided and flat. The overreaching surreal sequences regarding bizarre, psychedelic forces looking to seize the park and spread insidiously are sporadic. The gamble in fueling a family-friendly feature with the taboo of illness/death is unconventional, to say the least. But Wonder Park never dares to explore this unorthodox angle thoughtfully or honestly while sluggishly using its transparent means to simply link June's nonsensical exploits accordingly. The movie even fails to capitalize on the teachable lessons of promoting the pros and cons of fantasy and reality for youngsters to ponder enthusiastically with forethought.

Wonder Park masquerades as a jubilant jaunt through a young girl's expressive optimism despite familial setbacks. This rug rat romp is minimal at best and has silly-minded cotton candy on the brain. The controversial behind-the-scene dealings (the movie does not have an official director as original helmer Dylan Brown was fired for sexual misconduct) are a tip of the iceberg that does not compare to the actual breezy, banal big screen goings-on of this choppy, daycare dud.

Do you feel this content is inappropriate or infringes upon your rights? Click here to report it, or see our DMCA policy.
amusement parkanimalsanimationchildren fantasyWonder Parkyoung girl