REVIEW: Triple Threat is a martial arts actioner not worth a stinging chop to the creative groin 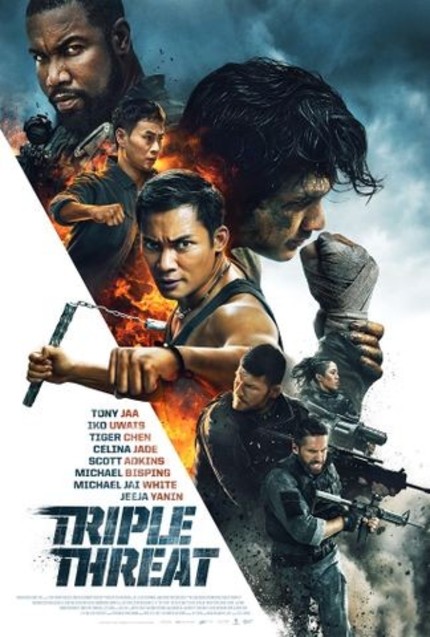 Action-pack film fanatics--regardless of the realm of genre that range from flashy martial arts to mainstream blow 'em-up/bang-and-bump cinema--should be enthusiastically shaking in their boots over director Jesse V. Johnson's generic-sounding Triple Threat. After all, Johnson (taking a page out of Sylvester Stallone's cinematic playbook with The Expendables film series) capitalizes on the grand gimmick of assembling a who's who of action star royalty into the manic mix. Thus, Triple Threat is there for the fanboy taking. Sadly, Johnson's kinetic caper packs a pedestrian punch for a corrosive crew creatively known to kick some exclusive butt throughout the years. This synthetic showdown of low-rent lacerations and belabored beatings is merely serviceable for indiscriminating martial arts addicts that would watch a housefly drop kick a rusty soup can.

Indeed, the selling point in Triple Threat are the aforementioned chopsocky Chosen Ones ready to rumble in this so-called explosive slapdish of kinetic chaos. Action buffs will relish the inclusion of such luminaries as Tony Jaa, Iko Uwais, Tiger Hu Chen, Michael Jai White, Michael Bisping, Scott Adkins...boisterous bigshots that had produced some mighty frenetic cinema sensationalism on the big screen within the last couple of decades. However, Triple Threat is only satisfied with containing these hedonistic hotshots for an instantaneous adrenaline rush instead of sustaining a stimulating story that has depth to go along with the manufactured deadly dalliances. There is no way that Triple Threat should be coming off as a bargain basement blockbuster with all the tightrope talent on board to discipline some terrorizing tail. At least the aging Expendables generated an excitable spectacle of destruction and dysfunction that carried a halfway decent semblance of an adventurous storyline highlighted through the box office. Johnson's anemic actioner with the combative younger and fresher personalities automatically feels slated for the VOD crowd.

Sure, the exaggerated gumption of gunplay and furious fisticuffs will satisfy the thrilling action sequences--this is an obvious given. It is too bad that Triple Threat seems to take an eternity getting to the nose-bleeding nitty-gritty as the first part of the flick drags. The redemption aspect to the several cutthroat characters appear marginally drawn while setting up the rationale for the half-baked battles riddled in showy bullets and brawn. The plot involves widowed mercenary Payu (Tony Jaa, "Ong Bak" films) and soon-to-be tag-a-longs Jaka (Iko Uwais, "The Raid") and Long Fei (Tiger Hu Chen, "Man of Tai Chi") that join him in the mission to protect a Chinese heiress' (Celina Jade, "Wolf Warrior 2") jeopardized life from those that oppose her radical stance in funding the eradication of crime syndicates in the region. Naturally, the baddies need this outspoken beauty silenced and her agenda terminated. Payu, whose assassinated wife still deems him distraught and disillusioned, wants to safeguard the heralded woman at all costs.

It does not take long when the territorial villainous vermin organize a trio of assassins to take out the trouble-making wealthy woman with designs on backing an anti-crime bill. Importantly, Payu has a score to settle with the dreaded Devereaux (Michael Jai White, "Black Dynamite"), the one responsible for headlining the drastic operation that ended in his late wife's demise. Devereaux is aided by his sadistic sidekicks Mook (Jeeja Yanin, "Chocolate"), Joey (Michael Bisping, "xXx: Return of Xander Cage"), and Collins (Scott Adkins, "The Expendables 2"). In fact, Devereaux ex-associates Jaka and Long Fei feel betrayed by their former leader and terrorist Collins so teaming up on the "good side" to exact revenge should serve all their blistering causes well.

The sprawling Triple Threat has the hinted recipe for a popcorn flick bursting with guilty pleasure pop and pizzazz. It is too bad that the story comes off as rather spotty. The build-up to the colorful confrontations--excluding the teased shootouts and occasional hand-to-hand combat that linger--come as a prolonged appetizer instead of a full-blown meal being digested. The cliched bonding session among the trio of reluctant friends, intrusive flashbacks, aimless banter, and the precision of choreographed fights...all seem rather fitting for a sketchy actioner's functioning. Still, it is inconceivable for a big-time action flick to feature mediocre martial arts mayhem with three of the biggest Asian stars in a patchy pet project that looks like it belongs on late night cable.

Triple Threat is more of a single slingshot of cut-and-paste frivolity that seems more makeshift than raucously inspired. Indeed, the trio of titans Jaa, Uwais, Chen and the supporting players in this vacant vehicle deserve more than this transparent kick-ass clunker that never really rises to the occasion in a paperback potboiler that trivializes its foundation of hired star power.

Do you feel this content is inappropriate or infringes upon your rights? Click here to report it, or see our DMCA policy.
assassinsmartial artsmovie action starsTriple Threat