REVIEW: Serenity is a fishing boat thriller not worth the wobbly waves it floats on 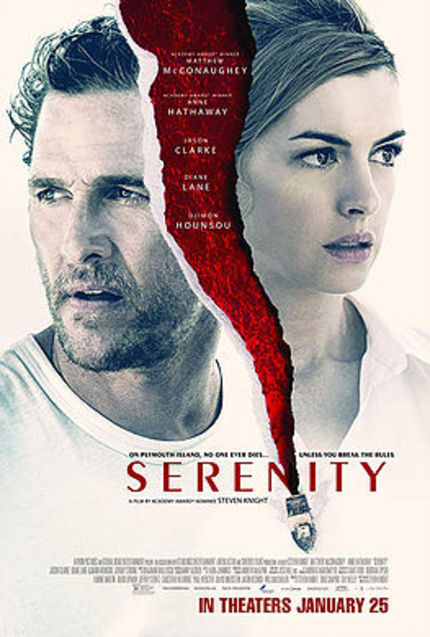 There is something fishy about the modern sea-bound neo-noir thriller Serenity that is not quite worth taking the bait. Writer-director Steven Knight ("The Girl in the Spider's Web") tries to spin a stylish yarn of intrigue in a tepid tropical potboiler that has all the luster of a discount lobster dinner. Despite showcasing the film's charismatic leads in tandem Oscar winners Matthew McConaughey and Anne Hathaway set against a breath-taking backdrop of gorgeous scenery Serenity merely floats along on a silly-minded concept of a synthetic suspense piece that needs rescuing from its own creative buoy. Unoriginal, uninviting and unwelcomed, Knight's pulpy miscue of intimate neglect and revenge sails on as one of 2019's earliest duds of the young movie season.

Knight's wooden direction, whose previous main movie-making credits are in screenwriting, awkwardly manages to convey the opulence of the showcased pretty places and the exposed pretty people behind the shady shenanigans. The whole breezy offering feels like a second-rate Lifetime cable movie. McConaughey portrays gruff fishing boat captain Baker Dill. When Dill is not giving tours around the eye-popping Plymouth Island in his prized possession known as Serenity he is in a drinking frenzy raked with ever-lasting guilt and cynicism. After all, he is a war veteran and exists under his current psuedo-name. Oh yeah...Dill finds the time to engage in a love/hate relationship with a giant tuna known as "Justice". Dill and Justice are not exactly what you would call the second coming of Captain Ahab and Moby Dick. Go figure.

Dill's alcoholism is interupted when his sultry ex-wife Karen (Hathaway) approaches him for a peculiar favor. Her request: she needs Dill to kill her current abusive husband (Jason Clarke) as he poses a violent threat to her safety (and their son's as well). Hence, Dill is slated to off her hazardous hubby--probably on one of the boat tours he is conducting. Little does Dill realize that the so-called vulnerable Karen is the typical femme fatale so she is not so innocent and helpless as it seems to her one-time lover. In the meanwhile, there is another beleaguered beauty thrown into the assorted mix in Dill's equally fetching island lover Constance (Diane Lane). Still, Dill's allegiance is to protect Karen and his estranged child (Raphael Sayegh).

There are other personalities that revolve around the tainted sea captain's so-called complex existence. Djimon Hounsou (the Oscar-nominated actor from 2003's "In America") is on board as Dill's first mate on the Serenity. Jeremy Strong's intrusive businessman shows up from time to time hounding Dill for whatever mysterious agenda is at hand. Although the film showcases Dill's dilemma as figuratively floating in hot water with all the developing drama supposedly building up this water-logged wasteland of soapy sensationalism has all the steadiness of a detatched rusty anchor. The plot's uneventful twists and turns arrive earlier than expected but that does not really matter because had they been revealed later on there still would be a cold reception to the drippy details. The labored contrivances and concoction of tepid tawdriness makes for an aged, nasally noir.

McConaughey, once relegated to the dismissive romantic comedies that defined his early movie career, now wallows in this intensified tripe that oddly feels more breezy than his previous rom-coms. Hathaway has some fun vamping it up as the jeopardized jezebel with sketchy motives but her femme fatale characterization is misplaced in this mopey melodrama. Both Hounsou and Strong are just there as added decoration. Lane's Constance is arm candy to McConaughey's Dill but it is too bad that she cannot match the swagger of Hathaway's damsel in distress. Consequently, the only true fascinating aspect to Serenity are the non-humans in this tedious tale: Dill's boat, Justice the tuna, and the locale. Otherwise, the performers get tangled up in this flaccid fishing net of a salty fable.

Serenity, for the most part, falsely boasts a turbulent tide of steaminess but only manages to sink in its woefully perfunctory puddle.

Do you feel this content is inappropriate or infringes upon your rights? Click here to report it, or see our DMCA policy.
abuseAnne HathawayDiane LaneMMatthew McConaugheymurder plotSerenity