REVIEW: The Possession of Hannah Grace is horror-induced hokum that needs to stay buried in the morgue 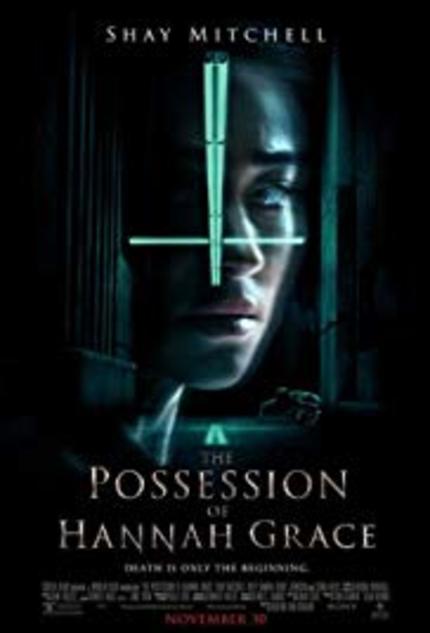 The utterly flimsy and formulaic goosebump thriller The Possession of Hannah Grace is the latest drab and dreary take on the possession horror film genre. Strained with creepy cliche-ridden jolts and the tired copycat mentality of countless frightfests imaginable Dutch director Diederik Van Rooijen ("Daglicht") assembles a choppy exorcist vehicle that is laughably bad. Riddled with tedious manufactured scares, anemic writing, and unfocused acting The Possession of Hannah Grace elicits unintentional chuckles moreso than crafty bloody knuckles. This perverse plate of predictability has been served once too often.

Along with Van Rooijen's mechanically macabre direction screenwriter Brian Sieve (the "Boogeyman" movie series) aptly creates an atmospheric, eerie universe that gives Possession its terrorizing texture and sense of corrosive confinement. Still, Sieve's woefully pedestrian script does not dutifuuly conjure up any inventive and tactical twitches that would enhance this otherwise conventionally weak frightfest. Unimaginative, lazy, and stillborn in its sinister sensibilities The Possession of Hannah Grace is a recycled jerky-and-murky spectacle that will barely register at all--until the next hollowed horror flick arrives on its conveyor belt of mediocrity.

Conflicted ex-cop Megan Reed (Shay Mitchell, "Pretty Little Liars") is a recovering alcoholic whose committment to her AA meetings and sponsor Lisa (Stana Katic) is obviously essential. However, Megan manages to land an overnight position at a Boston hospital morgue in the role of an intake attendant. Obviously, the graveyard shift can be quite intimidating especially being the lone soul overseeing the idle stiffs that surround you in haunting fashion. Indeed, one cannot blame Megan a bit if this precarious situation warrants questionable antsy reactions within the shadowy morgue.

The tension starts to mount when the arrival of a young girl's naked, mutilated charred body turns up at the morgue. The cadaver is identified as Hannah Grace (Kirby Johnson) and the audience will soon find out that the little dead diva is not your average corpse to contend with at will. Some may find the possessed-induced Hannah startling in terms of her disturbing acrobatic proclivities (the freakish contorted inhuman spider routine scuddering across the floor is one of the film's dazzling twitchy moments) and the demonic delusions as palpable. Others, however, may see these jumpy stunts as pseudo-excitable to compliment the convincingly sluggish, dull moments.

One would think that a horror flick centered around a dank hospital morgue where an addiction-addled weary cop must confront her personal devilish urges and the troublesome calculating kiddie corpse may inherently write itself in automatic heavy-duty chills and thrills. Sadly, The Possession of Hannah Grace does not have the depth of decent decadence to pull off the legitimate shock value. The production feels and looks amateurish. The storytelling synthetically drags. Some may spend their spare time trying to guess what previous fright fare that the woefully perfunctory Possession clumsily borrows from as opposed to getting inspired by the devious murdering antics of Hannah Grace. From the influences of The Autopsy of Jane Doe? to The Last Exorcism the sketchy proceedings are more boring than bombastic.

Overall, the lackluster scares contained in this generic action-oriented creepfest concoction fittingly takes place in a morgue because the ghoulish tendencies of the hellish Hannah pretty much are DOA within the realm of the sub-genre of possessed horror hiccups.

Do you feel this content is inappropriate or infringes upon your rights? Click here to report it, or see our DMCA policy.
copcorpsesevilmorgueShay MitchellThe Possession of Hannah Grace