REVIEW: Peppermint does not leave a sweet taste in this all-too-familiar female fury fable at payback 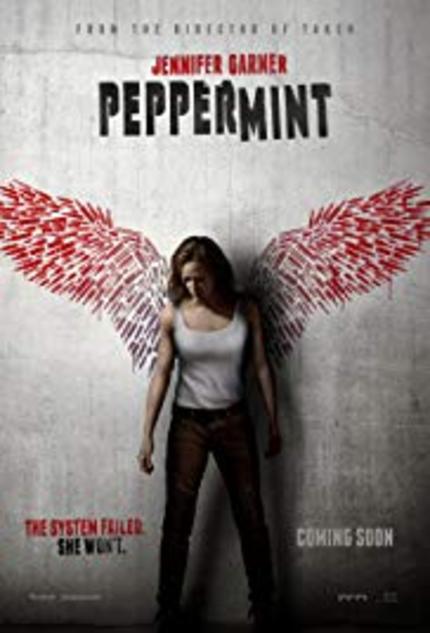 It seems like a long time since Peppermint star Jennifer Garner has kicked some major butt when we last saw her on the small screen in creator J.J. Abrams's spy series  Alias. In fact, Garner is no stranger to action-oriented butt-kicking on the big screen either (remember her feisty assassin in the frenetic yet forgettable 2005 superhero bomb Elektra?). Now Garner is back in raw form looking to bang heads in the name of retaliation courtesy of director Pierre Morel's toothless revenge thriller Peppermint.

Morel ("Taken", "The Gunman") and screenwriter Chad St. John ("London Has Fallen") look to breathe some lurid, excitable life into this cockeyed confection of furious feminine-driven strife. Garner is such an adventurous actress. Her range in various genres, for the most part, is considered reasonable and resilient. Whether it be Oscar-caliber dramas ("Juno", "Dallas Buyers Club") or innocuous kiddie comedies ("Very Bad Days", "Nine Lives") it appears that Garner has always carried her parts suitably. However, her disillusioned mother with the destructive tendencies in the provoking yet seriously strained Peppermint continues to showcase Garner's inability to conquer the action-packed sweepstakes. Morel's synthetic thrills and throbs in this overreaching actioner drenched in manufactured, cliched violence feels dismissive and inconsequential.

What plagues the problematic Peppermint in the dreary Morel-directed vehicle is its sheer blueprint of bloodied pathos that feels more formulaic than fresh in its purported intrigue. Constructed as the female version of Taken, Morel serves up Garner's Riley North's as the tortured soul out to avenge the demise of her beloved family at the horrible hands of the scum that claimed her loved ones. Sure, Peppermint follows the Taken playbook page for page.  However, Garner is trapped in a labored, sketchy thriller riddled with stagy violent sequences, branded stock baddies, and her sulky character methodically capping off the riff-raff at will. Lazily, Peppermint echoes every conventional chick revenge flick imaginable from yesteryear's Gloria to Kill Bill's Beatrix Kiddo. Other stolen influences awkwardly aped in Peppermint run the gamut from the nostalgic Death Wish to the John Wick series.

As a Southern California mother and wife, bank worker Riley North had the unfortunate experience of witnessing her 10-year old child (Cailey Fleming) and husband (Jeff Hephner) perish in a drive-by killing. Understandably, Riley is mournful especially with the horrid imagery of her daughter gleefully eating a peppermint ice cream cone at the time of her being slain. The culprits charged with Riley's family killings are Mexican cartel figureheads. Sadly, the suspects are set free despite Riley's efforts to finger them for the horrible crime against her loved ones. This establishes the beginning of Riley's emotional and psychological detachment. In short, she is out for blood and the killers will play the ultimate price.

Riley North is now rechristened as a full-fledged outlaw with an ambitious agenda to take down targets in drug lord Diego Garcia (Juan Pablo Raba) as well as the shady-minded justice system complicit in allowing the freedom of Garcia and his cocaine-dealing cronies. As the build-up of an increased body count persists an FBI agent sets her sights on Riley North as the corrosive force for the slayings. Detectives Stan Carmichael and Moses Beltran (John Gallagher, Jr. and John Ortiz) have their doubts at first regarding Riley's involvement in the region's escalating homicide rate. Regardless, Riley's thirst for vengeance is ravenous.

Peppermint yearns to be the splashy spectacle for Garner to embrace her combative mojo as the sorrowful vigilante with a vendetta to fulfill. Unfortunately, this rambling action piece feels aimless in its flat and flavorless portrayal of a doting working family woman-turned-solo wrecking ball out to exact street justice on foreign drug-pushing thugs. Garner's Riley is never really convincing in her hellish existence of a conflicted wife/mother afflicted with a painful loss. Morel never invests in Garner's transparent character development as he merely transforms his trigger-happy leading lady into a capable she-terminator cutting down the calculating creeps. What could have been a solid, turbulent psychological thriller fueled by estrogen-driven torment ends up as nothing more than an over-the-top, directionless predictable potboiler.

The villainous element in Peppermint--the Mexican drug dealers in particular--may be somewhat of a touchy subject matter given the sensitive climate in a modern-day political Trump-era landscape. Some Latino moviegoers and others may receive this messy movie as something culturally poisonous. Nevertheless, Peppermint is woefully suspect in its flimsy feminine fireworks beyond the stereotypical gimmickry of a scorned housewife eradicating the bothersome brown menace.

Do you feel this content is inappropriate or infringes upon your rights? Click here to report it, or see our DMCA policy.
grieving motherJennifer GarnerPeppermintPierre Morelrevenge