There’s an admirability in Siargao's attempt to go beyond formulas, but it overdoes this move leading to a film lacking in character depth and drama. 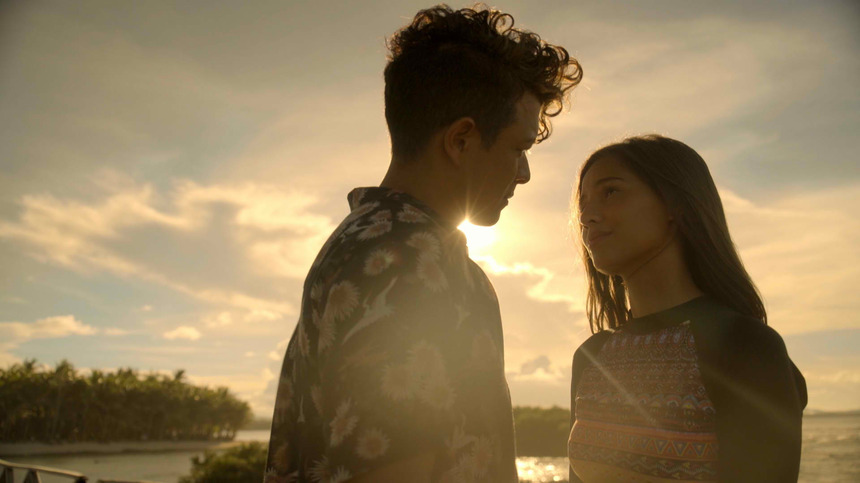 From the hovering drone shots that capture how the lush greenery of the island converges with its unrealistically clear blue seas to the immersive surfing montages which alternate from above and below the deep, it’s undeniable that director Paul Soriano's Siargao has no trouble conveying the allure of the titular island. It is a respite, a sanctuary that people seek out to recompose themselves, to take a step back and hope that, just like the waves, they too could propel through amidst the chaos that surrounds them.

The film’s leads embody this panacean impression of Siargao: a vlogger looking to nurse a broken heart, a musician running back home to leave the toxicity of city life behind, and the love of his past who can’t seem to move away from the confines and comfort of island life. All present how the island can be the much-needed crutch, guiding them to their sought recovery. But just like how a crutch can support, it can also mean a dependence, an unhealthy reliance. In a meta way, Siargao, the film, is like this. It opts to bask with us in all the island’s beauty but not really delve deeper, not fully let us in on who and what surrounds its audience. By the end of the film, we just know that Siargao is paradisial and the lead characters have issues, not much more than that.

Siargao starts off with the standard serendipitous meet-cute of the above-mentioned broken-hearted vlogger Laura (Erich Gonzales) and the scandaled rockstar Diego (Jericho Rosales) on a plane bound for Siargao. Sexual tensions develop, but soon their relationships turn into a de facto support group as they navigate through their respective issues, especially as Abi (Jasmine Curtis-Smith), Diego’s past love whom he still has hang-ups over, is back in the picture.

There’s a noble attempt in Siargao’s storytelling. It subverts the tropes often seen in Filipino romance films. Forgoing the heavy drama that would often stem from love triangles. Tension isn’t even built on what one would expect as a clash between Abi and Laura over Diego (the three are quite amicable). Siargao is a bit more intimate. Tension comes from within, from each one sorting out their own issues and through this they have each other as sounding boards, as confidantes. In a town of wanderers, you make the most of the “love” you can receive, no matter how ephemeral.

Siargao though, in this attempt at intimacy, isn’t as fully committed to making us invest in its characters. To make such a drama compelling, barriers have to be broken between the screen and the audiences. This dismantling fleshes them out, makes them more human and thus more relatable. Their struggles are our struggles as viewers.

Siargao keeps much of inner turmoils their character have in the abstract. Yes, they talk about broken hearts, about the loss of and finding oneself, and of the yearning to reset life and start anew, but these feel more like cold reads, sweeping statement that due to their generality may strike a chord. But they do nothing in creating living breathing characters that compel through their complexity. We have characters that tick characteristics off the troubled millennial checklist: burned-out, strained relationships with a/ parent/s, fear of commitment, friends growing apart, you name it. Not necessarily a bad thing — you scratch the surface in terms of relatability — but go more in-depth, make these characters interesting.

Interactions between characters also feel at times superficial because the film makes the odd decision of keeping journeys separate at large. I know the focus is on the personal struggles, but there’s a balance that needs to be achieved else it would feel removed. Intersecting paths are tantamount to bumping into each other at the bar and exchanging small talk, yet in Siargao, the small talk quickly becomes diatribes or lamentations about life. Without the adequate build-up, it’s hard to really care even given the heightened emotions in these scenes.

Overall, character development feels prolonged, ponderous, and cyclical; not well-drawn, not enough to make us empathize. For a film who repeats its message of adults, owning up to their decisions, I struggle to feel the weight character choices entail.

Maybe the film’s character building could have been more evocative if it wasn’t Erich Gonzales in the lead role of Laura? I don’t know. Her line delivery, even in the film’s supposed to be shining moments in writing, feels not as hard-hitting. Unlike, say Jericho Rosales who plays the weary brashness of celebrity naturally and Jasmine Curtis-Smith who’s restrained maturity is potent even with her lack of dialogue.

Siargao, at the end of the day, works better if viewed as an experiential film. There’s an admirability in its attempt to work around formulas, making the film more than a tired overtly sappy love triangle. But moving away from crisscrossing interactions and deep emotionality, Siargao overdoes it, leading to a movie that dips beneath the surface but never really dives deep. But hey, if you want to experience the beach from the confines of the metro, Siargao is quite serviceable.

Do you feel this content is inappropriate or infringes upon your rights? Click here to report it, or see our DMCA policy.
Metro Manila Film FestivalMMFFPaul Soriano