Director Cory Bowles has a razor-sharp vision of what he wants to accomplish. 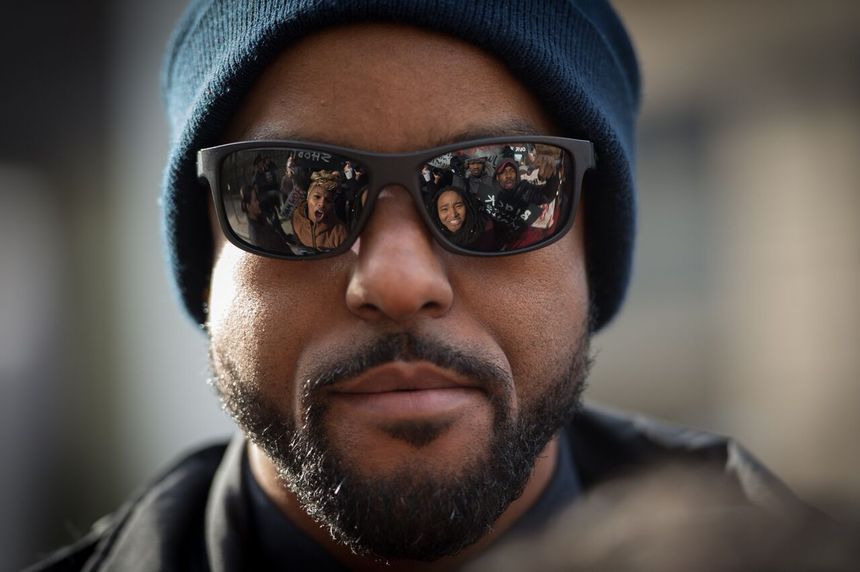 Between its success at the Toronto International Film Festival, where it premiered earlier this year, and here at VIFF, where it won the Canadian Feature award, Black Cop has become something of a sensation.

Its concept is an undeniably timely, intriguing one -- a black police officer 'flips the script' by profiling and roughing up white people -- and director Cory Bowles executes it admirably. The idea is ripe for comedic satire, but Black Cop doesn't shy away from the gravity of racial profiling and police brutality, even during its lighter moments.

Taking place in our world, in the present, the film begins with footage from various Black Lives Matter protests. We follow an unnamed protagonist (a powerful Ronnie Rowe Jr.) as he navigates both the streets of an anonymous city and the intricacies of his own reactions to racial tensions, the latter becoming more impossible to ignore by the day. He is the titular black cop, and he is conflicted by the role he inhabits as he watches (and listens to) incident after incident unfold, both locally and internationally.

Revealing his thoughts to the audience via voiceover narration, and at times by speaking directly to the camera, he informs us that he originally became a cop for reasons both noble and less so. He wanted to protect people, but he also enjoys the power, and the 'perks'. He is revealed to be a flawed, certainly not altruistic cop, who throughout his career had been able to compartmentalize his race in the context of his job. One night, when already feeling anger and restlessness about the state of society, he finds himself unfairly harassed by a white officer while off-duty, wearing a hoodie.

This event serves as the catalyst for the black cop, who then goes rogue; he first hears via police radio of a fellow cop questioning some black youths, and shows up to defend them. From there things escalate, as he begins trailing and intimidating unassuming white people. At first, the results are quite funny. A jogging suburban white doctor is incredulous as the cop questions him, but he is so confident in his innocence (read: whiteness) that he doesn't truly become worried until there is a visible threat of violence. Each encounter becomes increasingly less humorous and more uncomfortable, brilliantly illustrating the chilling fact that the cop's behavior might be considered “justified” by many when the races are reversed.

It's important to note that the black cop never kills (or seriously injures) anyone. Bowles allows him to be a complex, flawed man, but perhaps it was a pragmatic choice to never let him cross the proverbial 'line' into becoming murderous. This serves to keep the audience able to continue rooting for him, and never lets him sink to the level of the real-life officers accused of needlessly shooting, and killing, unarmed teenagers. It's enough to simply show the absurdity of the problem without making the protagonist irredeemable.

Black Cop is confidently shot and edited, with a razor sharp vision of what it wants to accomplish. It certainly helped that Bowles had already made a short film of the same name and concept, and has been ruminating on the idea for some time. Occasionally, there are too many stylistic disparities at play, but the integration of cellphone footage is a canny touch. In sum, this is a powerful, wryly funny, and moving film that does justice to its daunting topic. It demands to be seen.

Do you feel this content is inappropriate or infringes upon your rights? Click here to report it, or see our DMCA policy.
2017black copcanadiancory bowlesronnie rowe jrvancouverviff