Lee Sang-il's RAGE is an excellent star-studded drama, polished to look like a billion dollars. 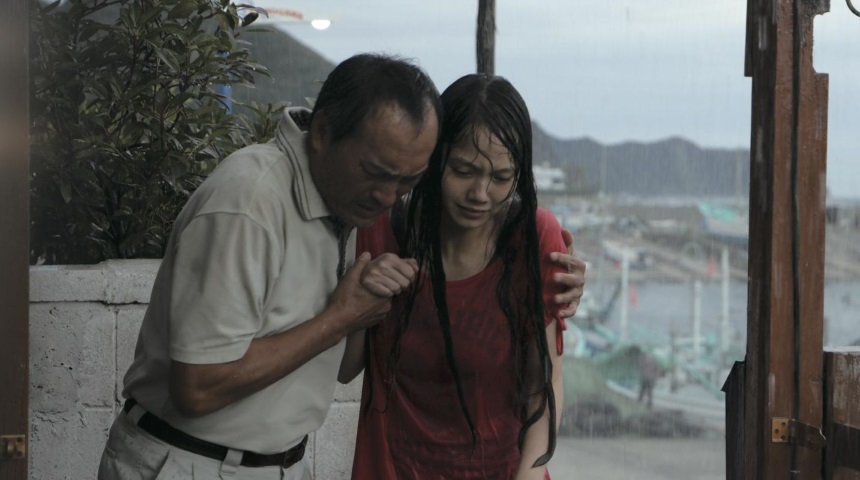 A lot of films tend to look unpolished, and bland, handheld video is often accepted to be good enough it seems. Not so with the films of Lee Sang-il, which look as bright and shiny as if the visuals have been dipped in gloss. Take his remake of Clint Eastwood's Unforgiven, which looked absolutely drop-dead gorgeous throughout.

The same can be said about his new thriller drama Rage, which premiered a year ago in Japan and is now traveling film festivals worldwide. Whether the camera visits a very bloody murder site, a sunny beach or the neon-lit gay nightclubs of Tokyo, Rage never fails to impress on a visual level.

Rage starts with police investigating a double murder. Some guy entered a house, brutally slaughtered the couple living there, and left after writing the word "Ikari" (Rage) on the wall in the victims' blood. The police quickly find out who the murderer is, but he manages to flee and disappear, even undergoing cosmetic surgery to ditch his pursuers. 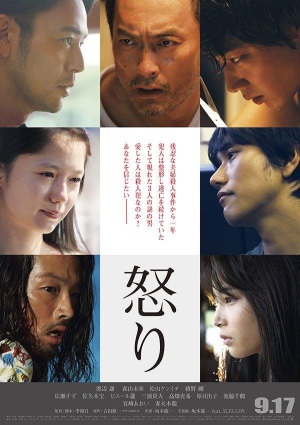 The story then shifts a year into the future, splitting into three separate storylines. In Chiba, a harbor foreman has mixed feelings when his daughter falls in love with the mysterious new guy on his team. In Tokyo, a flamboyant gay businessman picks up a homeless man for some fun, but ends up taking a liking to the stranger, even allowing him to live in his house. In Okinawa, a girl discovers she is not the only new resident in her village, when a charismatic hermit starts living on a small island nearby.

In each of these stories, people bestow trust and kindness on a stranger, and seem to receive kindness in return. But as each newcomer stubbornly refuses to discuss his past, doubt rears its ugly (or necessary?) head. When the manhunt for the murderer enters the national evening news once more, the peoples' doubts get given a direction. Could one of these three strangers actually be the missing killer?

Lee Sang-il wrote the script together with novelist Yoshida Shūichi, based on the latter's successful book, and both book and film put all the characters through the proverbial emotional wringer. Each storyline makes the viewer dive into some dark territories indeed. On the one hand this makes the film dip into melodrama, and can make it hard to watch at times. On the other hand, it provides the stellar cast with many opportunities to shine.

And shine they do. I'd single out Watanabe Ken because he's excellent as always, but this is just a fine collection of great performances here. In the year since its premiere, Rage has been picking up acting nominations and awards by the boatload. Tsumabuki Satoshi, Ayano Gō, Sakumoto Takara, Miyazaki Aoi and Hirose Suzu all picked up some prizes, as did director Lee himself.

Rage may be more about trust than it is about rage, but it visits several other virtues and sins as well. While its story gets painfully blunt at times, the film did not fail to make me feel a turmoil of emotions. I was moved, disgusted and in tears at the end. A week later bits and pieces of it still pop back into my head, and I consider this to be one of the best films I've seen in cinemas this year.