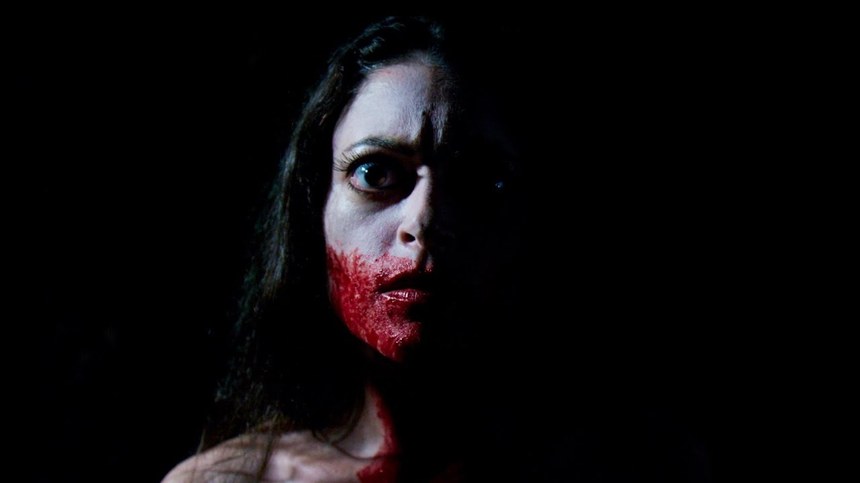 Gregg Bishop first caught our attention back in 2008 with his hilarious zomedy, Dance of the Dead (review). That film also caught the attention of Sam Raimi, who released it under his Ghost House deal with Lionsgate. But, like the titular siren in his latest film, Bishop lay dormant for the nearly ten years following.

Now, with his slight-of-hand V/H/S: Viral segment "Dante the Great", and the gender subverting new horror feature SiREN,  an adaptation of David Bruckner's V/H/S segment "Amateur Night", it appears Bishop is back in fine form.

In the film, a bachelor party becomes a savage fight for survival when the groomsmen unwittingly unleash a fabled predator upon the festivities.

Out of all the V/H/S segments, do you know why "Amateur Night" was singled out for a feature spin-off?

I actually don't know. I wasn't involved with that decision, but I did hear it was something that they had started to consider after they finished V/H/S. Also, I'd say that SiREN is more "inspired by" the short. None of us wanted to just go re-make "Armateur Night", we all wanted to take it in a new direction and do something more expansive and original while at the same time being sure both the feature and the short could co-exist in the same universe.

How did the project land at your feet?

Producer Brad Miska reached out to me after David Bruckner had developed several drafts of the script with writers Ben Collins and Luke Piotrowski and asked if this would be something I'd like to direct. I was excited because Bruckner was on board as a producer and was very involved in the development of the script and the making of the movie. He even did me a huge favor and directed 2nd unit for a couple of scenes (he's now ruined me for all 2nd unit directors in the future).

We had a wonderful collaboration and I learned a lot from him. The main reason I jumped on board was that the writers wrote a great script. It's suspenseful and unpredictable, with characters you care about. On the surface, the film is a fun, thrilling monster movie, a dark rollercoaster ride. But more on a foundation level, SiREN is a relatable human story that deals with the anxieties of commitment and fears of losing one's freedom.

Your films have a sense of fun and black humor to them. SiREN was funnier than I expected and I was curious if that was something you punched up once you came on board?

Since the film was set around a bachelor party, the script already had a lot of humor in it. I then cast actors who could help ramp up the comedy in a organic way. The movie gets so dark and the threat is so intense, the humor is there sporadically to make the ride for the audience more enjoyable without diminishing the threat.

Presenting the siren as a victim as well as a creature of craving and nature presents an interesting duality. Any thoughts on that in terms of the film's overall themes?

The monster movie is my favorite sub-genre. I grew up on movies like Jaws, Jurassic Park, Alien, The Thing... and with Lily, we have a wonderful misunderstood monster in the vein of Frankenstein or King Kong. You don't blame a shark when it eats a human, it's just its nature.

So, do you see SiREN as a feminist film at all? If so, how?

The creative team had lots of conversations about this, actually. Since we were making a movie that deals with aspects of gender and sexuality, we were hyper-aware to be sure we weren't reinforcing clichés and stereotypes.

We made every effort to avoid anything obvious or outright harmful. First and foremost our goal was to make an entertaining movie. Any additional resonance of feminism or feminist themes are a welcome bonus.

Do you know if there are any plans to adapt any other segments from the V/H/S series?

Besides your own (sorry), which additional segment do you think would benefit from a feature adaptation?

AFTER "Dante the Great? "Safe Haven" would be a dope feature.

Agreed. Is there anything coming that you're working on we should keep an eye out for?

Currently writing an original science fiction thriller and working with the writers of SiREN on a new original horror movie, both of which I plan to direct.

There is also a spec script I wrote with Joe Ballarini (who wrote Dance of the Dead) that we sold to Sony Pictures with Michael Bay producing called Lockdown at Franklin High. It's basically a monster movie set in a high-school.

Sounds great! We look forward to it. Thanks for your time, Gregg.

SiREN is out everywhere.