Blu-ray Review: TALE OF TALES Is Lofty, But Is it Good? 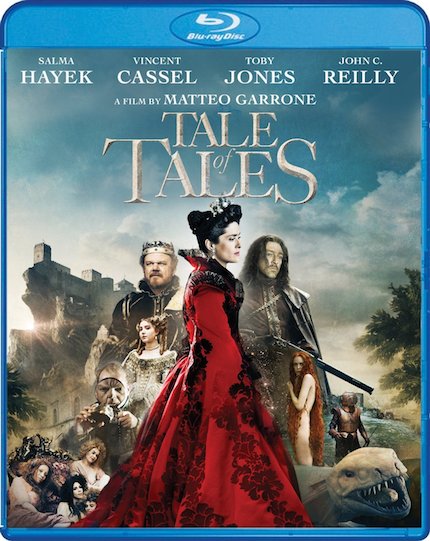 Directed by Matteo Garrone (Gomorrah), Tale of Tales was nominated for Cannes' prestigious Palm d'Or and many other awards, but does that make it a good film?

I'm on the fence about this feature that follows the tales of three tales, all from 17th-century poet Giambattista Basile. These stories follow three kings, a princess, a prince, and one queen. The film is beautifully shot and the production, art, and costume design are all breathtaking. The acting is great, too, and it should be, as the caliber of stars such as John C. Reilly, Salma Hayek, Vincent Cassel and the like know what they're doing. But in terms of story, there's just that elusive something that feels missing.

Sometimes I was engaged in the plot, other times, I didn't care --- and I wanted to adore this film. Does the fact that I'm bothered by not loving mean that it's good? All art is subjective, of course, and there will be those that do love this film, just as there will be those who don't care for it.

Everything is technically superb; so what's my problem?

I've spent a few days thinking this over, and it comes down to character; these people are in dire situations here and there, but half of the time, I just don't care. Hayek's character, the queen who wants to separate her son from his look-a-like friend, is cold as ice. Now, you can play a villain in a deliciously evil way (see Barbara Crampton in Beyond the Gates), or you can play a fierce-yet-flawed villain (see Mads Mikkelsen in Casino Royale), or you can play the bad person one note, which is what happened here. Similarly, John C. Reilly, who plays Hayek's king, is also one note, more or less --- however, there's a huge caveat to his performance. He's got warmth and is willing to do anything for his queen, including fight a sea monster. Sadly, he's dispatched much too early in the story. You do feel bad for the prince who's left behind with the overbearing queen, however.
In another tale, Toby Jones plays a king who acquieses to his daughter's request to find a suitor --- in a very odd way. He makes a game of it by handing his daughter over to whoever can guess the orgin of the hide on the castle wall. In this case, it's from a pet flea who grew to a gigantic size and then died. The winner is an ogre, and the princess is both enraged and distraught. Her character arc was one I did care about, as she went from meager to murderer.
Vincent Cassel plays another king, and this one can't keep his hands to himself --- or his clothes on. He's an immature, mean man who only has eyes for beauty, and is in for a surprise when he marries someone he'd previously deemed ugly enough to throw out the window.
So, does this come down to writing, directing, or acting? My guess is a combination of all three. But like I said before, man is Tale of Tales gorgeous.

In addition to the actual film, Shout Factory's blu-ray disc offers a "making of" featurette and the trailer.

Tale of Tales is out today via Shout Factory. Check out the trailer below.

Do you feel this content is inappropriate or infringes upon your rights? Click here to report it, or see our DMCA policy.
John C. ReillyMatteo GarroneSalma Hayektale of talesToby JonesVincent Cassel