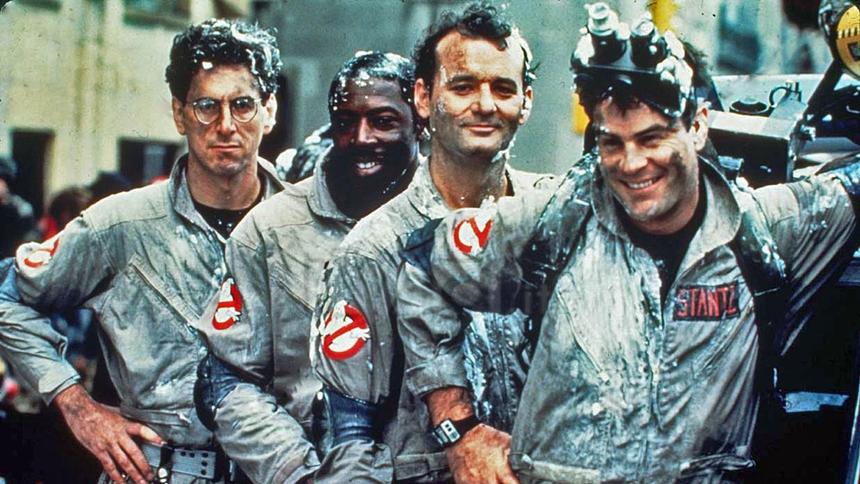 With the new reboot coming soon, I decided to rewatch the old films and see how they held up. Take into consideration I saw these movies at a very young age and this would be the first time since then to watch them all the way through. Purists and fans may not be too happy with my opinions but I'm trying to look at the films as if they were released today and not let my nostalgia affect that. If anything, I was more interested in the cartoons and toys than the movies themselves :P

So with that in mind, let's jump into this river of slime!

Ghostbusters is a simple and effectively fun story. Supernatural entities have been popping up all over New York City and a team of scientists (including one "every man") must don their self-made, ghost capturing equipment to help rid the island of these pesky poltergeists.  This is such a great premise that it's almost impossible to mess up in the first film.  Who wouldn't love the idea of blasting supernatural entities with a nuclear accelerator attached to your back and then trapping them in containment box even the worst curling players couldn't mess up? This alone had me obsessed with the toys and pretending to search the closets for any spooky specters to bust.

In the movie it's really the characters that I had trouble liking however... The film opens up with Dr. Peter Venkman (played by Bill Murray) conducting a test on two students. He's basically torturing the male student with electrical shocks while making the attractive female student seem like she has physic transferal abilities. What was supposed to be played for laughs just seemed kind of sleazy to me. Sure, his arrogance does make for actual comedy later on, I'm looking at the power grid debacle, it doesn’t exactly make me like him though.  He just comes off as too cocky instead of charismatic and I didn’t find myself laughing at all his smart-ass zingers. Ray and Egon (played by Dan Aykroyd and Harold Ramis) fair better with their scientific characters, but really these two could have been combined into one person. Yes, Ray is depicted a little more innocent and child like of the two but why couldn't Egon have had these character traits? His dead pan scientific explanations could have been a fun contrast to this and made him more than an information, spewing robot. Ultimately they weren't that distinguishable to me until the end where Ray accidentally thinks of their own demise from a childhood campfire memory. Sadly, Winston (played by Ernie Hudson) is introduced so much later in the film that he almost didn't need to be there. I understand he was supposed to be like an audience surrogate, but we've been watching the three doctors mess around with this paranormal universe for some time already we don't really need him to help us feel like we're there. The film's love interest, Dana (played by Sigourney Weaver) is also your very typical damsel in distress. If anything she was the perfect audience surrogate as we're already trying to understand the situation unfold in her refrigerator from the beginning. When her apartment starts to experience hauntings, Peter decides to give a thorough investigation only because she's beautiful. Obviously, this keeps in line with his character, but for her, there's not so much to do other than need the Ghostbusters' help and eventually get turned into a demon dog.  This is a shame considering Weaver goes on to play the badass Ellen Ripley in the Alien series. Rick Moranis as the annoyingly nerdy neighbor, Louis, is pretty entertaining as he's constantly getting locked out of his apartment because of his incompetence. He does borderline on stalker though since he's always waiting around for Dana to leave her place so he can talk to her. Too creepy dude.

So why is the original still regarded as a classic even to me? Yes, I rambled on about what I didn't like about all the characters but you can't help but love the situations they get in to. You never get an explanation to their proton packs as they literally show up to their first ghost call armed with their gear in tow. We're only told to "never cross the streams". Obviously this is going to come back somewhere near the end of the film as this sort of plot device always does.

But really who cares?

Their destruction of the hotel and capturing of their first spirit kind of makes you forget all that since it plays out like every kid’s make believe adventures. Peter attempting to pull the sheets from underneath all the silverware is also just icing on the cake. Now that I think about it, you don't even get another scene like this until the end of the film. We just get a montage of them making busts alongside news broadcasts. But at least it has the incredible theme song playing over it!

For most films, I basically decide whether I like it or not based on if I enjoyed the ending. Boy oh boy, does this movie deliver on an awesome ending though. At first glance it seems like the team will have to do battle with Gozer, a really bad 80's music backup dancer. This could have been fine as she seemed to be much more powerful and agile than our heroes; finally a worthy ghostly adversary. But when you realize that Ray has accidentally chosen the form of their own destruction, I couldn't help but smile as a giant walking marshmallow man made his way towards the rooftop where they stood. Sure, his demise was "short and sweet" and we finally get the call back of "crossing the streams" but it's all just too entertaining and what makes this film so memorable.

Ghostbusters 2 is a strange film. It almost seems like it was made today as a reboot/sequel of the series.  It’s constantly trying to get everyone back on track with the Ghostbusters again and giving us new weapons, a new logo, and even a new take on a giant walking the streets of New York City. Unfortunately it just feels like too much of the same thing we got last time with just a slightly different take on certain story elements. At least we didn't get introduced to a younger generation of Ghostbusters who might take over the series. *Mini golf clap*

As the movie opens, we’re shown that no one is interested in the Ghostbusters anymore and even has Ray and Winston resorting to singing disgracefully at children’s birthday parties. Does Winston actually have something to do in this film? Eh, unfortunately not really. Dana now has a baby, Oscar, but they won’t really acknowledge whether it’s Peter Venkman’s or not.

Why? Because of reasons I guess.

At least we’re shown her having an interesting job by restoring paintings but she’s still ultimately the damsel in distress, even though it’s her baby the villain is after.

So like all good heroes, you need a good villain. And what do we have this time around? Well, we have Vigo, the Carpathian, or Vigo the Torturer…. or Vigo the something along those lines. He’s basically a ghost stuck in a painting who wants to be reborn into little Oscar’s body. Simple enough premise so yeah, let’s go with it. Oh and there’s a huge river of slime running underneath the streets of Manhattan that’s formed by all the negative energy of the people of the city. Thanks a lot screen writers! *I live in NYC*

So again we’re pretty much given the same story structure as the first film.  There are no ghosts, why do we need the Ghostbusters? Oh wait yes, there are. Yay, the Ghostbusters are back! Cue montage and new song that is not as good as the original. The film seems like a missed opportunity though a good effort was definitely put in.  The whole river of slime was an interesting additional as it touched on how New Yorkers were perceived as rude and callous in the late 80s. Having the slime make a toaster dance would be something you’ll have to hold your breath for until later.

The characters are more or less the same with Peter still being overtly sarcastic and woman obsessed. At least he’s shown some growth as he offers to take care of Dana and the baby after their bathtub tried to eat him. But really it’s mainly to get back in her good graces since they have been broken up even before the events of the movie. Ray and Egon still should have been one character in my opinion as nothing separates them from standing out even more so in this movie. And poor, poor Winston only has one shining moment of saving the guys as they are locked in a room that catches fire. I guess he does have a funny but also really scary scene when he’s met with decapitated heads and run through by a ghost train but I still have no idea who this guy is and what makes him a necessary character.

The awesomely overpowered proton packs make a return but every weapon does need an upgrade and this time we have slime.

Yes, slime. But it’s positively charged, whatever that means, so getting a bukake to the face just means waking up feeling like a million bucks. Sure you don’t want another Stay Puff Marshmallow Man roaming the streets (actually I did) but you do need that larger than life reveal at the end.

Ready to stop holding your breath on that dancing toaster and take a new one?

So they’re going to cover the Statue of Liberty with the recently established, positively charged slime to make it walk the streets of New York in hopes that it will lift the spirits of everyone in order to break through a giant barrier of negative slime where Dana and her baby Oscar are held hostage? Yeah that was a mouthful but ok, I can buy that I guess…

The film also gives us surprising fan service by letting Louis, former neighbor turned lawyer, don the Ghostbuster fatigues and proton pack and trek it across town to help out the guys. In reality his efforts are rather fruitless but the crowd does seem to think he made a difference. Yay Rick Moranis!

So how did this film end if they’re not battling a giant edible cream puff this time? Well Vigo fails at transferring his body into Dana’s baby and so becomes flesh in order to have that last fight before the credits roll. Randomly laid objects are hurled at everyone, people get tied up in things, and Vigo himself even possesses Ray. But it’s all just too easy as the gang shoots their proton packs and slime dispensing units and Vigo is blown up into smithereens. Such a pushover.

Yay, the Ghostbusters saved the day again.  Our heroes vanquished Vigo, Peter reunites with Dana, and we’re greeted to a large crowd of extras singing Kum By Yah.  Things were a little more forgettable this time around and their win against the villain felt very flat compared to Gozer and Mr. Marshmallow. We didn’t have the possibility of every molecule in our body exploding at the speed of light in order to win the war so the stakes didn’t feel that high. Ghostbusters 2 has its fun moments but just feels like another sequel that doesn’t change things enough for the better. I guess I’ll always be left wondering, what if we called He-Man instead?

Do you feel this content is inappropriate or infringes upon your rights? Click here to report it, or see our DMCA policy.
ghostbustersghostbusters 2gozernostalgiapeter venkmanproton packsstaypuff marshmallow man