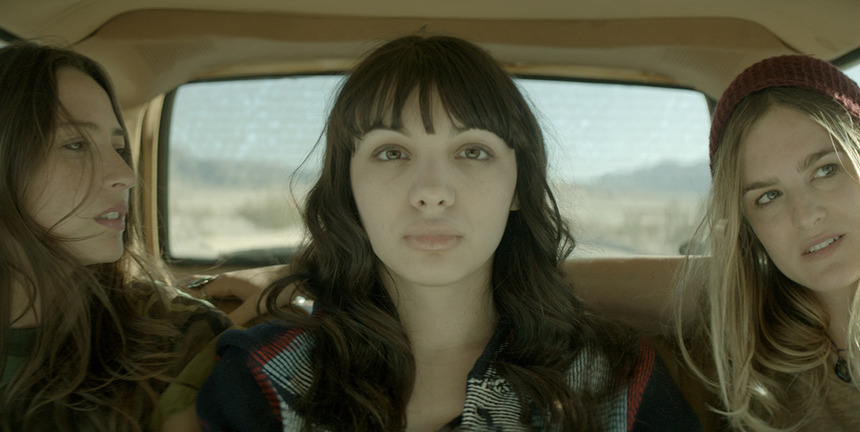 A lonely stretch of highway through the middle of nowhere provides ample fodder for the directors of Southbound, a new anthology project that reunites much of the creative team behind previous anthology hit VHS with a similarly high quality result. While most anthology projects tend to be developed with each segment in isolation from one another the creators of Southbound chose to take another approach with the segments directly linked into one another with the entire piece weaving into a whole that plays like Twilight Zone for the indie horror generation.

Linked or not, these things are always easier to approach in individual chunks and given that there are only four creative teams here we'll look at each individually.

Four man collective Radio Silence open and close the piece with a bang, first introducing us to a pair of bloodied up men racing across the desert in the battered pick up clearly on the run from something - something that proves to be not even remotely of this world - in the opening segment before flashing back and telling us the tale of how they ended up in that situation originally in the close.

In the second position is Roxanne Benjamin, a producer on the VHS films here making her own directorial debut with the tale of an all-female rock band broken down at the side of the road who demonstrate why it is never, ever wise to accept help from strangers as their random benefactors prove to be not at all the bland suburbanites that they seem to be.

Following next is David Bruckner with the tale of a frantic and well meaning man desperate to do the right thing when his car strikes a pedestrian along the road.

And last to be introduced is Patrick Horvath with the story of a man whose search for his long lost sister leads him to a remote town where, yes, he does manage to find her but, no, she has no particular interest in leaving. And maybe he should have left her alone in the first place.

Though laced with moments of shocking - and well executed - violence Southbound exists less within the strictures of contemporary horror than it does within the worlds of EC Comics and The Twilight Zone, with the stories emphasizing strong characters and big ideas more than mere splatter and the voice of indie icon Larry Fessenden as an all night radio DJ filling the role of Serling or The Crypt Keeper to offer commentary on the proceedings.

As for the quality, as with all such efforts mileage will certainly vary depending on taste but there do appear to be some clear winners and losers here. Horvath, unfortunately, comes out on the short end, his piece clearly coming off as the weakest both in terms of script and execution. Radio Silence are a clear rung above with a very strong story and strong execution hampered at times by some inconsistent performances. Benjamin is a further step up, her piece rooted in the natural dynamics of her three leads and building up to a very satisfying and surprising conclusion. And Bruckner? Bruckner delivers an absolute gem, a tour de force balancing act between panic, ultra black humor, and queasy realism. Bruckner's been doing the studio dance a bit since arriving on the scene as a co-director of The Signal but seriously, folks, someone give this guy a feature now. He's beyond ready.

On the whole Southbound rates as a very worthy entry in the recent wave of anthology horror, a strong offering loaded with clever ideas that makes full use of the format to deliver an entertaining ride down a road I hope to never, ever encounter in real life myself.

Do you feel this content is inappropriate or infringes upon your rights? Click here to report it, or see our DMCA policy.
david brucknerpatrick horvathradio silencereviewroxanne benjaminsouthboundtiff 2015