Review: BETTER CALL SAUL S1E07, BINGO (Or, Building Up An Immunity To Electromagnetism) 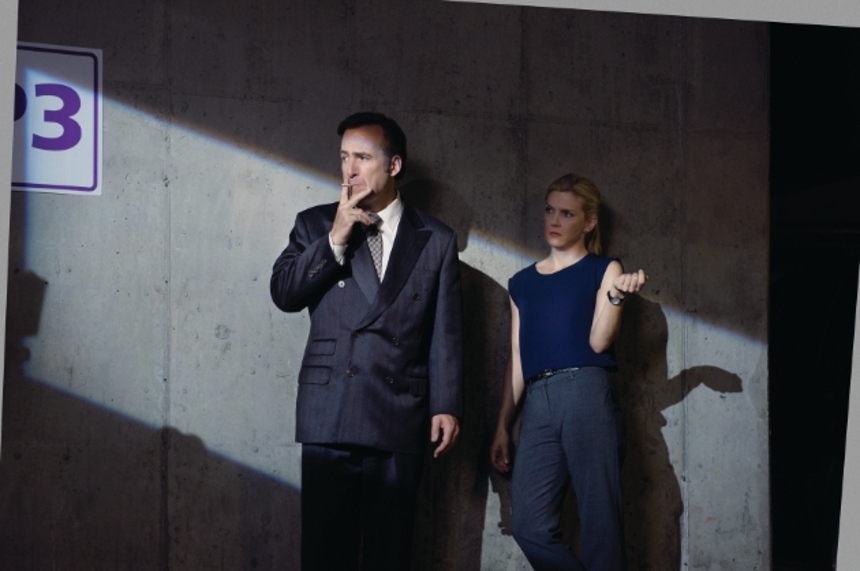 Theft is at the heart of "Bingo", whether it's the Kettlemans and their theft of the money in the first place, Mike's theft of it back, Jimmy's perceived theft of the Kettlemans as clients from HHM, or Mike and Jimmy's theft of the cop's notebook (which they return here). The idea of stealing something is coupled closely with rationalising it to yourself in Better Call Saul, and that of course returns to the show's favoured focus, the murky line between right and wrong.

As we're now at the seventh episode, we're definitely seeing that doing the right thing is something Jimmy frequently has the strength to do. But, acting in a selfless way also comes with consequences for Jimmy every time. Returning the money, and the Kettlemans as clients, is the right thing. But, doing it also means putting his improving business on hold. In the end, he crumples in defeat because he gives up his hope to move into the attractive offices he scopes out earlier in the hour. Are things hopeless for Jimmy McGill? Maybe they wouldn't be if he didn't have a conscience.

"Bingo" is perhaps the strongest episode when it comes to putting a spotlight on the easy chemistry between Jimmy and Kim. Their scenes together are fun, light and full of meaning that remains unspecified. We still have no idea how these two know each, why they're so close and how long they've known each other. But, there are some things you don't need plot to explain, and we definitely know how much they mean to each other. When Kim tells Jimmy he deserves a great office, it's without even a hint of sarcasm. And when he goes further than expected to return her clients and protect her job, it's a big move that seems entirely within character for how Jimmy has been established so far.

This is an episode full of little visual tricks and callbacks. One of the best is watching Jimmy encounter Kim where he saw her in the first episode after his confrontation at HHM. This time, though, he's physically hauling business away from the bigger firm in the form of the Kettleman files. And he'll later return the Kettlemans themselves through that same exact place. This is clearly going to be a location for further important moments between Kim and Jimmy.

As for the Kettlemans, they may be the comedic highlight of the episode. They're a specific kind of deluded crazy that is just hilarious to watch. Julie Ann Emery's portrayal of Betsy Kettleman, especially, has a great manic energy to it that reveals just how much she wants to convince herself that the pair of them are innocent. The whole set-up leads to ridiculous scenes like the one back at the diner where they first met Jimmy, attempting to navigate a conversation in which all three participants know the Kettlemans are guilty but aren't saying it. The desperation of it all is perfectly tragic and wonderfully humorous.

The few brief moments with Chuck this week are markedly different to previously. Now, he's actively attempting to beat his condition. That doesn't mean an acceptance that it could be psychosomatic, though, it means standing outside and counting the seconds in an effort to acclimatise to the electromagnetism. He's trying to build up an immunity, using the analogy of taking small amounts of poison to explain the idea to Jimmy. Even with his impassioned speech ("I have to be useful again!"), it's clear Jimmy doesn't see this as a realistic long-term way of Chuck handling his electromagnetic hypersensitivity.

And then there's Mike, first seen sitting below the faces of Albuquerque's most wanted criminals, a hint at a future we know will come true. It is great to see him well and truly back in action, with the knowledge that he'll likely be back helping Jimmy again in the future. His plan to discover the location of the money stolen by the Kettlemans is a subtle work of genius, and it'll be great to see more schemes like this in the future.

Jimmy may currently be turning to Mike for help in order to do the right thing, but if doing so keeps kicking him down it's not hard to see how a partnership will form around an arrangement that is more criminal in nature and more beneficial to the both of them.

Do you feel this content is inappropriate or infringes upon your rights? Click here to report it, or see our DMCA policy.
Better Call SaulBob OdenkirkJonathan BanksRhea Seehornvince gilligan