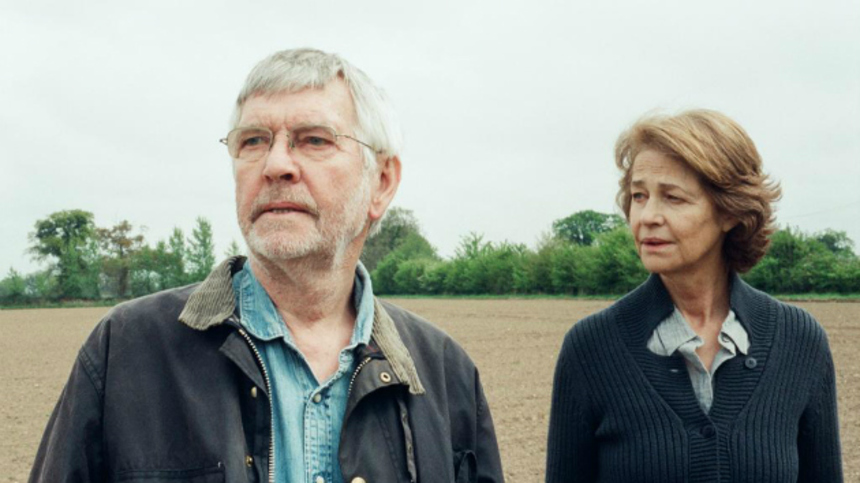 How much can, or should we, let the past affect the present? If our lives went one way instead of another, can we mourn too much what we didn't have? If you think you were not your spouse's only great love, would this ruin your marriage?

Andrew Haigh poses these questions and others in his understated yet deeply moving second feature, 45 Years. An intimate portrait of what seemed, until the story of the film, a very happy marriage, Haigh lifts the lid on how the smallest pieces of information can get under the skin to tear love apart. Charlotte Rampling and Tom Courteney just won the Silver Bears at Berlinale for their performances, and rightly so.

Kate (Charlotte Rampling) and Geoff (Tom Courteney) are preparing for their 45th wedding anniversary party later this week, in their quaint English country village. One morning, Geoff gets a letter from the authorities in Switzerland: the body of Katya, his girlfriend before he met Kate, has been found after she was lost on a mountain hike nearly 50 years before. As Geoff seems suddenly obsessed with his first love, Kate sees cracks forming in what she thought was a solid relationship.

The focus of the narrative is on Kate, and how she reacts to Geoff's reaction. This might seem odd at first; after all, it was Geoff's love who died, someone from his life before Kate, so it would at first seem more natural to look at his perspective. And for the first half of the film, I did want to know a bit more. But as the story progressed, I was so engrossed with Kate and how she handled the situation that I almost forgot about Geoff. Of course, both Courteney and Rampling are old hands at this sort of thing, and have a wonderful chemistry. They are completely ease at Kate and Geoff, showing what at first at least seems a solid happy marriage with its unique tender moments, quirks, and difficulties. As things grow more strained between them, we see less of them together and more of Kate alone, as she grasps the reality that, had Katya not died, she would not be with her husband. A moment of innocent honesty from Geoff turns into a growing despair for his wife, now perhaps feeling like the second choice.

Rampling has always drawn the camera to her, able to make us believe with the most languid of looks. Now, she gives one of her most heart-wrenching performances in years. A additional discovery mid-way through the film (which I definitely cannot reveal) shatters completely what was only cracked (to be mended).

This, like Haigh's earlier Weekend, is a walking and talking film. This is the most difficult kind of film to direct, as you have to give the audience enough information so that, when you have long takes of your characters pondering, that audience can imagine what they are thinking about and stay engaged. Luckily, Rampling and Haigh pull this off beautifully. As Kate waits while Geoff isolates himself in the attic, looking for pictures of his lost love, or she wanders next to the river or across the fields, we can see her asks herself, can she ever forgive Geoff for his revelation? Does it really matter, since they ended up together and have been happy, or so she has thought? Was she always just what happened, instead of Geoff's destiny? And the big question I'm sure a lot of people wonder about their long-term partners: what do I really know about this person?

There is a bit of an improvisational, naturalistic feel to the dialogue (and perhaps some of it was), set up against the party planning and confrontation of doubts, and almost thriller-esque scenario that the characters are facing. Geoff becomes obsessed with climate change, and Kate focuses on the party, but suddenly, the metaphorical body of Katya is between them, and words are hard to come by. By having the story focused on Kate, the audience is in her place, arguably the more difficult of the two places, we follow her experience and thought process, until the ambiguous (but nicely so) finale.

Haigh is definitely defining a particular style and focus of stories on love and intimacy, setting his characters in their apparent natural spaces and then pulling the proverbial rug out from under them. 45 Years is a beautiful and heartbreaking film, showing two consummate actors at their best, giving them all the space they need to draw the audience, and letting up (and them) contemplate and question well after the end credits.