Review: JOKER Is A Confounding Mess, Unless You're 8 Years Old (In Which Case It's The Best Movie EVER) 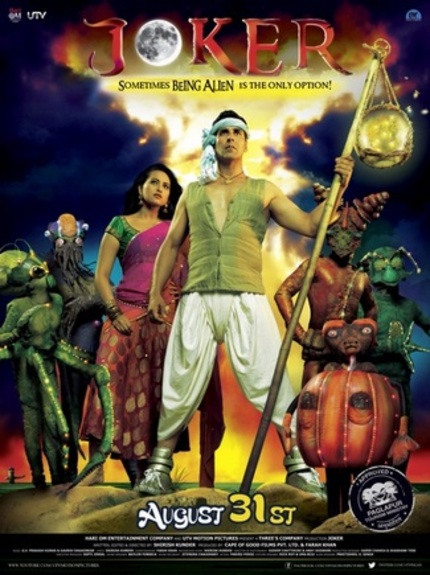 Shirish Kunder's Joker is a puzzle of a film. Not serious enough to truly engage any careful adult viewer, but occasionally a little bit over the top for the younger set, the film fails to hit any kind of solid groove in spite of a solid comedic turn from Akshay Kumar. This lack of focus and a disjointed feeling are symptomatic of the hell through which Joker has been put over the last couple of years, and the film suffers greatly for it. However, none of that really matters if you can yank your inner child out from the deep, black recesses of your soul and let him do the thinking for you.

Joker was marketed as a big budget sci-fi action film with aliens, which was probably one of its biggest mistakes. That isn't what the film is about, in fact it's a very small part of what the film is about, and the actual story is really not all that bad, but the advertising will lead the wrong audience into theaters who will end up spreading bad word of mouth. Normally I don't care much for box office talk, but the extreme dissonance between how the film was sold and what it actually is will kill Joker dead, and kill Akshay Kumar's success streak in spite of really not being all that bad of a film.

At its heart, Joker is a children's film. Akshay Kumar plays a scientist named Agatsya who has spent his life on a mission to contact aliens through scientific research paid for by huge research corporations in the US. One day he receives a call from his brother back in India telling him that his father is ill and that Agatsya needs to return to say goodbye. Along for the ride is Sonakshi Sinha in her second consecutive co-starring role with Kumar, and this time around she's given even less to do than she did in Rowdy Rathore, her role is entirely superfluous and the film would suffer no great harm if it was excised entirely. They travel back to India, to a small town that time and surveyors forgot, Paglapur.

Paglapur is actually a fantastic idea for a city. In English the name translates literally to "Crazy Town", and the history is that the area once housed the largest sanatorium in India. Immediately prior to The Partition in 1947 when the British Empire exited India, the inmates escaped the asylum and took over the town, rendering it uninhabitable for normal people, but a delightful oasis of craziness in rural India. As such, Paglapur is populated by a colorful cast of characters, most of whom are descendents of the original patients of the sanatorium, who have created their own autonomous city outside of the control of the nearby state governments. Sounds fun to me!

We soon learn that while the residents have created their own magical wonderland of crazy, there is a reason that Agatsya was summoned, and it wasn't his Dad's health. The city is beginning to die due to a lack of water following the building of a dam in a nearby state, and the locals want their big city brother to save Paglapur. Agatsya hems and haws for a bit, but eventually takes on the challenge of saving his ancestral home. After pleading his case to the three adjacent state governments, he realizes that Paglapur is so autonomous that it falls under no other government's jurisdiction, and he has to do something drastic to bring his hometown up to date with modern conveniences like fresh running water and electricity.

A conveniently timed news report inspires Agatsya to create crop circles in the local fields to draw attention to the city. A silly idea to be sure, but its execution and the resulting pandemonium caused by news reporters inexplicably descending from around the globe, is just good fun. When that excitement dries up, Agatsya conjures actual aliens, starting out with hunchbacked speedster Kachua, who is dressed up in gourds and body paint and decorated with LED lights, which completely fool the media on the site and restart Paglapur-mania. Things don't go exactly as planned and more chaos ensues. There is a nemesis, more aliens, and numerous gags to keep the film from getting boring, but really, Joker is more or less 105 minutes of shenanigans.

The idea of an NRI (Non-resident Indian) returning to Mother India for a brief visit and staying to help revitalize a rural area is nothing new. Very recently this exact idea was explored more successfully and in a more mature manner by Ashutosh Gowariker in his film Swades. However, rarely do we get a comedy dealing with this same very serious subject manner. While Swades did have a few song and dance numbers, overall it was a very serious film in which Shah Rukh Khan (playing a scientist from NASA) returns to his family in India and finds their situation so dire that he asks to take a sabbatical to save the village. A lot more happens in that film, and it is among my favorites of SRK and Gowariker (who is also responsible for 2008 Indian Oscar submission Jodhaa Akbar and 2001 Oscar nominee Lagaan) is an extremely talented director who has the increasingly rare ability to match serious subject matter with standard masala formulas and no sacrifice his vision either way. Joker is very clearly a comedy first and a moral tale second, and that's why it will fail.

The action in the film is so goofy and gloriously over the top that no Indian critic wants to give it the time of day. What most of them have failed to do is shift their point of view to that of someone for whom the film might actually fill a need. The screening I attended was populated with about 80% adults and 20% children, while the adults were more or less silent, the children howled with laughter at all the right moments. The focus of the marketing team charged with selling the film has been wrong all along. India seriously lacks quality children's entertainment, and when films are make to cater to children in that country they fail miserably because they pander. Joker is a children's film that doesn't condescend, but I think it might also have been unaware that it was a children's film in the first place.

The main problems with the film all stem from issues which wouldn't bother kids. The script is incredibly clunky, there are recurring gags that would get boring for an adult after a couple of rounds but kids will eat them up, the suspension of disbelief in the film is stretched to a breaking point if you're an adult, but kids are much more able to ride the film out and less apt to get caught up in external logic. It amazes me that the team behind this film didn't even make any attempt to reframe the discussion around Joker. It is a marketing disaster, but it is not a terrible film.

I went into Joker fully prepared to think it was the worst film of 2012. My Twitter feed was filled with negative comments all day. I really tried to cleanse my palette before I sat down in the auditorium, but right up until the opening credits rolled I was cringing and wondering what I'd gotten myself into. It turns out my fears were mostly unfounded. The film isn't great, hell, when put on a level playing field with other films that have been marketed similarly and cost roughly the same , it's not even a particularly good film. However, I make the argument that for a particular audience it is an effective film. Whether or not it finds that audience, I don't know. Perhaps the answer is in the stars.