Blu-ray Review: GIRL ON A MOTORCYCLE 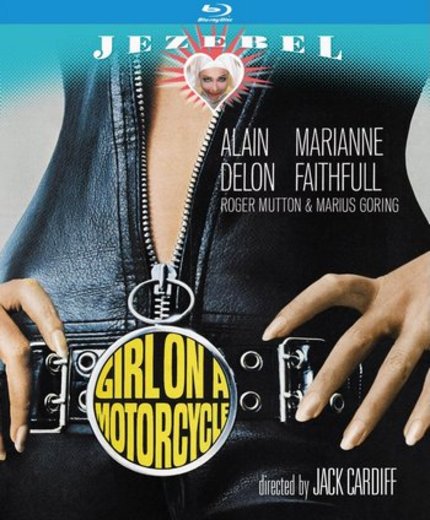 Jack Cardiff's Girl on a Motorcycle is the first Blu-ray release on Kino's new Jezebel imprint. It is under the Jezebel name that Kino will begin releasing some of its sexier, non-horror, genre acquisitions. We've previously taken a look at the mondo style documentaries London in the Raw and Primitive London from Jezebel, and this title carries to titillating torch for sexy British films from the 60's admirably.

Best known as one of the most well-known and talented cinematographers in the business, Cardiff (The African Queen, The Prince and the Showgirl), was also a director, but none of his films has enjoyed the lasting reputation of this adaptation from a French novel about a woman's liberation and quest for intimacy on the back of a motorcycle, riding across the European countryside. Starring two of the most adventurous actors of the time, Marianne Faithfull and Alain Delon, Girl on a Motorcycle manages to make an indelible impression as both a series of dreamlike vignettes and a tale of love lost and regained.

Rebecca (Marianne Faithfull) has her whole life planned out for her, including an impending marriage to a very sensible gentleman, when she is swept off her feet by a motorcycling Daniel (Alain Delon). The film is told almost entirely in flashback as Rebecca glides across Europe on her way to meet with Daniel and rekindle their brief affair, though she wonders if her recollections stick with him as strongly as they do with her.

It took me a while to get into this film, I'll admit. There's not much that really happens as the film begins, and at only 88 minutes, there's not a whole lot of time for boring shenanigans. However, once I was able to settle into the film's groove and understand where Cardiff was coming from, the transition into the right mood was pretty easy. The film is less about a plot than it is about conveying feeling, and Marianne Faithfull's Rebecca imparting her ecstasy to the audience. The dichotomous nature of the two leads is almost comical, they are complete opposites when it comes to demeanor, and yet, as is often the case, they are lost without one another, or so Rebecca would have us believe.

This is the central conflict of the film. Whereas Rebecca is extremely open with her emotions, at times ridiculously and comically so, Daniel is as cool as a cucumber, as were many of Delon's characters. We are led to believe that while Rebecca is in lust with Daniel, that he is, at time, merely a body willing to be acted upon. This is, I think, deceptive, as it if often the outwardly cold among us who are the most fragile; still waters run deep and all that. However, we are only privy to Rebecca's memories, and, as we've learned in many a film, memory is a very dangerous and unreliable thing. As she abandons her everyday life to slip into an incredibly sexy leather body suit for her pilgrimage to her own holy land, she slips into a delirious ecstatic state that probably colors her recollections a bit.

As one would expect from a film by Jack Cardiff, the cinematography in Girl on a Motorcycle is pretty intense. From the dizzying opening credits to the deliberately and pragmatically solarized love scenes, the film bears the mark of an adventurous cameraman. Cardiff explains in the commentary that he had to stylize the more explicit sexual love scenes in order to get them past the censors back in 1968, and it works very well in that way, as well as creating a hyper-real feeling to those moments of pleasure and conveying Rebecca's emotional state as we explore her memories. Quite an achievement.

Girl on a Motorcycle remains a difficult film to parse. On one hand, it seems to accomplish its goals, and on the other it does so in a way that is often heavy handed and lacking subtlety. Marianne Faithfull, in one of her very first roles, is expected to carry this film almost entirely by herself, as Delon's character has little to do dramatically apart from looking aloof. If Cardiff's direction to Faithfull was to look crazily at the camera while zooming by on a motorcycle, she succeeded, however, her overacting in these pieces is a bit distracting. Who really knows at this point, the film works for some people, but I left it feeling a bit out of the loop.

Jezebel/Kino present Girl on a Motorcycle in a new restoration that ranges from pretty good to very good, but stops just short of great. The image isn't completely clean of marks and scratches, though they are few and far between. In addition, there are some softness issues that seem to be more a result of the source material than the transfer. There are a few occasions in which close-ups yield surprisingly beautiful detail and lovely grain, but the bulk of the film is just very good. The English audio track is satisfactory, though it occasionally suffers from its age. An English subtitle track would've been welcome, but perhaps that's just my personal preference coming through.

The only significant extra on the Blu-ray is an archival audio commentary from Jack Cardiff, who passed away in 2009. The commentary is very nice and Cardiff gives us a great look behind the scenes of the film, though there are a lot of pretty big gaps in his narration. It seems as though it almost would've worked better as a stand alone interview, rather than a commentary. The only other extra is a trailer.

Jezebel's first Blu-ray is really good, but between a merely above average visual presentation and a lack of special features apart from an old commentary, it seems like more could've been done. I enjoyed Girl on a Motorcycle anyway, and I hope that their upcoming releases continue to improve upon this trend and follow in the footsteps of Kino's Redemption line, which is quickly becoming one of my favorite collections out there!
Tweet Post Submit

Order The Girl on a Motorcycle on Blu-ray at Amazon