A Word From Inside The Production Of OUTPOST: BLACK SUN 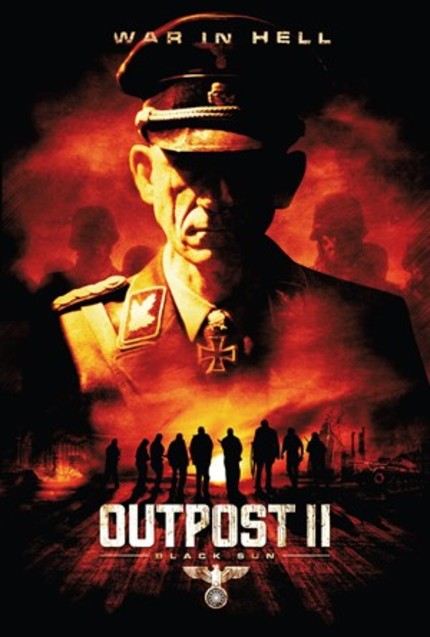 [Director Steve Barker is currently hard at work on Outpost: Black Sun, the sequel to his hit Nazi zombie film Outpost. ScreenAnarchy is happy to provide this, what will hopefully be the first of many inside looks on the production of the film from producer's assistant Naysun Alae-Carew, along with a pair of exclusive images from production below.]

I'm currently sitting in a brightly lit office, having just come from a darkened room filled with a horribly eerie silence. The frozen onlookers watching, waiting with held breath, trying to not to make the slightest sound. Smoke rises, inexplicably. Two people sit in the darkness, unmoving, lit by a dim spotlight. I fight an involuntary shiver.

A man enters, looking dapper in a cream suit. Before he can say anything a voice from somewhere beyond shouts 'Cuuuuut!'. The spell is suddenly broken and frenetic movement is everywhere. Harry, the first assistant director, barks orders to reset and get the costume and make up checks done. An unassuming man, wearing his ever present green cap, enters the room and walks over to one of the actors. He has a big grin on his face and speaks with such soft tones that no one but the actor and himself can hear what he's saying.

The actor is Richard Coyle (Prince of Persia: The Sands of Time, Going Postal), and the man is Steve Barker, the director of the surprise DVD hit of 2008 - Nazi zombie film 'Outpost'. Made for a nickel and a dream, the film did incredibly well and put the production company, Scotland-based Black Camel Pictures, on the map. And now it's three years and another film (Legacy: Black Ops) later, and we're finally shooting the sequel 'Outpost: Black Sun', a film that's been a long time in the making.

Outpost was a horror action movie through and through. You can tell by watching it that it's been made by genre fans for genre fans. Since I joined the company last year, I've quickly realized that Black Camel is not a company that's making genre film for a quick buck, it's actually run by genuine fanboys (and a girl). I needed to do some serious catching up to be able to hold an intelligent film conversation.

For Outpost, long-time friends Steve and Kieran (one of the producers) were channeling the films of their youth - movies like Where Eagles Dare, Guns of Naverone and The Fog, and succeeded in making a dark and atmospheric movie that shocked an awful lot of people by letting the invincible Nazi super-soldiers win. Since then, Kieran and Arabella (fellow producer) have been working non-stop to make the second film a reality. I can't give much away about Black Sun, but the best comparison I can think of is that it's Aliens to Outpost's Alien. It's a bigger world, bigger characters and bigger fights. It's also incredibly ambitious (even more than the first), which although giving the producers daily stresses, is making for a damn cool film.

We're now three weeks in and just wrapping today on our location shoots. It's been fifteen shooting days of Scotland's most normal weather - cold, damp and misty (and sometimes randomly sunny just when you don't want it), and I've come back from the nether regions of Dumfries and Galloway with a head cold as a souvenir. But the cast and crew of over 100 (on our biggest days) has soldiered on, with just the normal level of good natured grumbling you'd expect from any film crew.

From this point on we've got another 13 days in a 40,000 square foot studio just outside Glasgow, which is housing set builds of the original Outpost bunker and oh so much more (on a pretty immense scale). I was there about a month ago when everything was all wooden frames and polystyrene, and even then I felt like a giddy kid walking on the hallowed ground of a Universal Studios set for the first time. Can you tell? I'm quite excited.

Even though I'd say that I'm early on in my film career I've worked on a decent number of film sets in the past few years. But watching the monitors while shooting Outpost: Black Sun, I've never felt that sense of excitement from just watching the raw footage. Without any grade, music or cuts, the Black Sun footage is as chilling and captivating as any film I've seen, so you won't be surprised that I've high hopes for the finished product.

That's all I'm going to divulge at the moment, with any luck, ScreenAnarchy (and you) will like this first instalment, and I'll be back again in a few days to keep you up to date with a bit more info about how we're getting on. In the meantime, check out our Facebook and Twitter for daily photos and updates.

Naysun Alae-Carew is a baby producer for Black Camel Pictures. He joined the company in summer 2010 after realizing that being an economist would be quite dull and so produced the short film 'Zombie Musical' that Black Camel is now developing into a feature film. He is the producers' assistant on Outpost: Black Sun, which means he does whatever the production can't afford to pay anyone else to do. 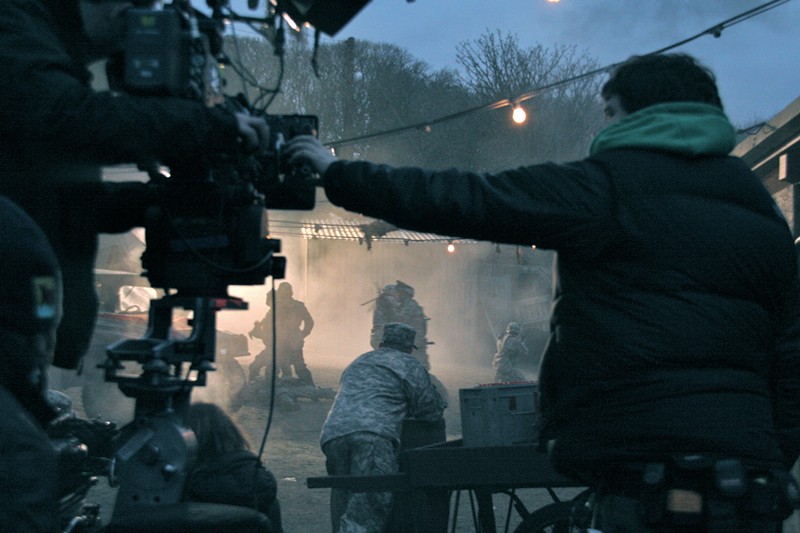