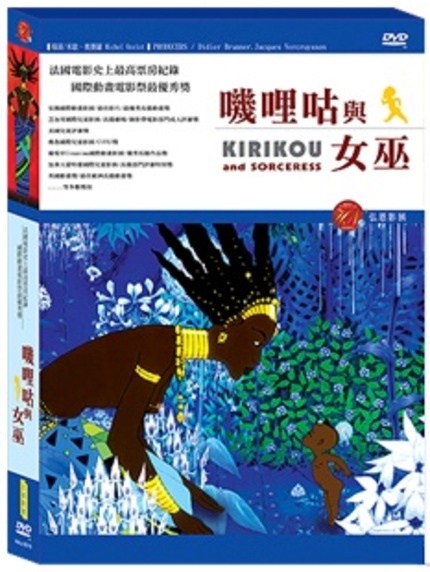 Take note Criterion, take note Eureka.
You're both concerned and dedicated about bringing works of art to the attention of movie-lovers worldwide, by providing English-friendly releases of select worthy titles. You hunt for the best possible audio- and video transfers and you combine those with delightful extras.

For surely his work needs to be seen in the best possible quality available. And although his (current) native country France has released and re-released his work to the point that you can find some real gems there, those that don't speak French have a worse time of it.

The film Michel Ocelot is probably most famous for is "Kirikou and the Sorceress" and it has been released worldwide on DVD, in varying degrees of non-excellence. For starters, until last month there was no English-friendly version which was anamorphic. The recent French anamorphic DVD re-release and BluRay both sport an English Dolby 5.1 soundtrack but no English subs, so there's no chance to see "Kirikou" anamorphically in the original soundtrack while understanding what's being said if you don't speak French.

But I was so happily surprised by the quality of the Korean edition of "Azur & Asmar" that I started treasure-hunting in Asia for a nice edition of "Kirikou and the Sorceress".
And this led me to buying the Taiwanese regionfree Limited Edition. It contains the film, the soundtrack on a separate audio-CD, a lovely book, and a set of cards. And all this is wrapped in some mighty weird packaging.

If only that was the only weird thing about this edition...
Read more after the break.

Although "Kirikou and the Sorceress" is hardly the newest movie (it's from 1998, ten years old already this year), I'd dare say it is still criminally underseen. I knew of its existence and was always intrigued, but never willing to actually take the plunge and buy the (at the time) rather expensive Uk R2 DVD. That reluctance wobbled when I saw bits of "Azur & Asmar", and completely vaporized once I had seen that movie in whole.

So now I finally own a version of "Kirikou and the Sorceress", and I definitely feel the need to talk about it before I jump into the DVD description.

Little Kirikou is smarter than your usual baby. So smart in fact, that he talks to his mother from the womb and births himself. The world he arrives in is a sad place though: the village he's born into is terrorized by a witch called Karaba and her army of cursed dolls. She has eaten nearly every man of the village, extorts the women out of their jewelry and has made the local well dry up.

But Kirikou is not just smart, he's also an incredibly fast runner from day one. He uses his powers to foil Karaba's plans again and again, but then he starts to wonder WHY the witch is acting so evil. It's a question no-one in the village seems able or willing to answer, so Kirikou sets out on a dangerous journey to a wise man who can tell him. But first he needs to escape the unending surveillance of Karaba, who is out to kill him...

Michel Ocelot spent a large part of his youth in Guinea, which is in Western Africa, and his time there forms the basic inspiration for "Kirikou and the Sorceress". He used a combination of African legends, personal observations and creative hunches to write the story of Kirikou, and the end result is certainly unique. It's told as a fairytale, meaning the audience has to accept several outrageous concepts "as is" but this never takes you out of the story. No explanation is ever given for Kirikou's fast mind and faster feet, but in the context of a fairytale it's instantly believable. Yet as outlandish as it gets, the main themes are some simple truths about humanity and Michel Ocelot has a thing or two to say about humans. All humans are flawed in this movie, even Kirikou himself at times, but the way you deal with other people's flaws is a major part of what defines you. And as I said in my "Azur & Asmar" review, Michel Ocelot manages to tell you his opinion without getting preachy, a talent I wished was more common amongst moviemakers.

But where Mr. Ocelot really shines is in his use of animation to tell his story. Gone are the common practices of strict adherence to realistic perspective and making everything as detailed as possible: Ocelot uses colors and composition to create stunning images, a style which fits the fairytale structure of his story. And he does it masterfully. At times you're looking at a picturebook come alive, and I mean that in the best possible way. Every frame of animation can be hung on a wall as a painting.

Interestingly, Michel Ocelot chose to depict the people as realistically nude. No full frontal genitals are shown for adults, but children run around naked and grown-ups only wear the barest minimum of clothing, with all women showing their breasts in full or flaccid glory, depending on age. This rampant nudity is never used to titillate but it definitely adds an exotic flavor to the film, as it's so utterly unlike any other children's story you've ever seen animated. I didn't find it to be offending in any way, rather I thought it was an honest and even respectful portrayal of the people who live in such a way.
Viewers from more eh... prudish countries might think different, of course.

There is no large, sweeping epic soundtrack written for "Kirikou and the Sorceress" but what little music there is is good. The score was specifically written for the movie by the nightingale of Senegal, Youssou N'Dour. And in one single tune he proves why he's famous. It's catchy as hell and very hard to get rid of.
Warning: you might be humming "Kirikou est petit" for weeks!

Michel Ocelot revisited Kirikou seven years later: "Kirikou and the Sorceress" was a big success in France, and people were clamoring for a sequel. Ocelot refused at first, saying the story was obviously complete at the end of the first movie, but finally relented to write some "inbetween" stories. And he ended up directing those himself as well, resulting in "Kirikou and the Wild Beasts".
Those stories are certainly nice and the artwork as always a delight to watch, but it's an add-on to the brilliant original which is "Kirikou and the Sorceress".

Michel Ocelot has a knack of making movies which are utterly enchanting for all ages and "Kirikou and the Sorceress" is no exception. One of the best animated movies of the last few decades and certainly one the most original, it comes with the highest possible recommendation.

Damn, I expected this edition to be "a mixed bag", but I never expected that to be taken literally!
Yes, the packaging is actually a plastic goody-bag, with all the contents shrink-wrapped within.

The DVD itself first: audio comes in four flavors, all of them good. Mandarin and French soundtracks are provided both instereo and Dolby 5.1, and subtitles are provided in Chinese and English. The English ones have some slight grammar-errors but nothing which derails the narrative.

Video is more shaky, unfortunately.
The colors are vibrant, and as long as things are moving along the image is fine. But the image is non-anamorphic and quite soft. Because of this, black lines are often ill-defined against darker backgrounds, which is a problem when you're watching animated people which are drawn as dark brown with black lines. You can already see it manifest in the screenshots on this page, although to be honest the problem is less apparent in a moving image. I can watch this edition without constantly thinking "what a shame about the image" and I'm quite the nitpicker at times.

The disc is barebones: there are no extras on it.

Next is the cd-soundtrack which, surprisingly, holds the soundtrack.
Why is that surprising?
I expected the CD to contain Youssou N'Dour's catchy score for the film, but alas, that is not on here. Well, technically speaking it is, but... let me explain. What's on this CD is the Mandarin stereo soundtrack for the movie, as a single track. Huh? So I can listen to the Chinese version of Kirikou while I drive? Puzzling choice.

The set of cards is equally baffling. Each card contains a word in English and some Chinese characters. Not all of the words are applicable to the movie, so my guess is this is some language teaching method?

But easily the biggest and best asset in this edition is the book. It is a full-sized coffeetable book, easily twice the size of the one in the Korean "Azur & Asmar" DVD edition.
Listed as a storyboard comparison, it's actually a collection of artwork detailing the whole narrative chronologically. If you've watched the movie, THIS is the book you can use to tell it to your child as a bedtime-story.

And that concludes my review. I can't wait to own this on BluRay, but in the meantime this is one of the only DVD editions which has the French audio combined with English subs. The book is stellar, but that's the only real thing I can use for recommending this specific set as it doesn't beat the other English-friendly editions in the AV-department.

Buy this title from our affiliate.
See pictures of it here in our DVD-forum.

Read my review of Azur and Asmar.
Read the interview GhibliWorld.com did with Michel Ocelot.

Last but not least, loyal reader TheOrientalNightfish has made a website dedicated to Michel Ocelot.