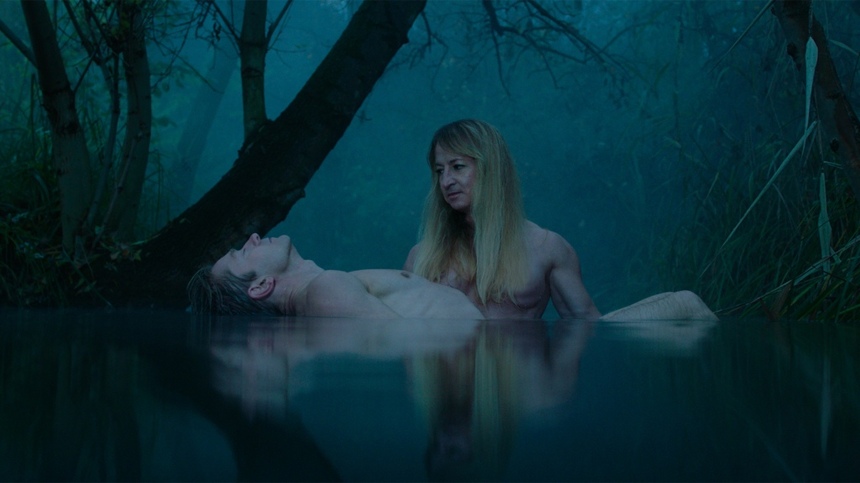 Co-directed by Anna Nemes and László Csuja, Gentle has several pulling points for the U.S. audience, despite not hiding its Euro-origin.

Csuja debuted in 2018 with Blossom Valley, a punkish coming-of-age tale about the wild Bianka,  who steals a kid, and the mentally-disabled Laci, who takes care of the kid and Bianka, living with all her whims. Csuja was already preparing Gentle (under the working title The Crown of Creation) in collaboration with visual artist Anna Nemes when his feature debut premiered.

Nemes and Csuja jump into the world of bodybuilding right at the beginning, following the protagonist Edina (real-life bodybuilder Eszter Csonka) doing her routine on a stage. Dehydrated, fatigued, and tanned, Edina pushes through to the joy of the jury and her trainer, manager, and lover Ádám (György Turós). Ádám is even more hyped about the success and he is already planning the training routine for the next championship, which is supposed to take place on a more prestigious international stage.

Similarly to Csuja's debut Blossom Valley, Gentle is a study of female roles and empowerment. Whilst Bianka defined herself against the conventions of mainstream society, Edina is defined by her buffed physique and trainer in a cloistered world of the bodybuilding subculture.

Wedged between two championships, Gentle is a behind-the-scenes peek into the strict bodybuilding regime and discovery of one's identity, wants, and needs. Edina continues in the stringent preparations for the next championship, from which she and Ádám are existentially dependent. Living a cloistered life, the story mostly unravels between the pair's ramshackle apartment and a gym.

Money is scarce. To contribute to the success, Edina needs expensive stimulating substances. Her partner, who is already beyond the competition bodybuilding stage of life, attempts to procure the necessary funds by doing a tryout as a male stripper. The scene offers the first moment of misplaced commodified masculinity, as Ádám does not fit the club's dominant age bracket while failing to bust the desired seductive moves. However, he overcompensates for his shortcomings by pushing Edina to the brink of her forces.

In addition, she partially unburdens Ádám's role of a provider by clandestinely applying for a softcore pseudo-escort service, flexing muscles to sad, aging males in rented hotel rooms. While she is forcing herself for the majority of gigs, one fateful encounter with a younger client awakens her desires. The hard-working bodybuilder explores her animalistic inner self in a ritualized reimagining of Athina Rachel Tsanagri's Attenberg exploits, as the pair devise their own body language.

Nemes and Csuja employ the emotional and physical tribulations of Edina in the central story arc as she gets lured away from Ádám by her newly unearthed desires, while bringing her body to collapse. She tries to pull through both strands and also remain loyal to her coach and partner, although choices will have to be made, eventually.

Gentle has the veneer of docu-fiction, and the claustrophobic cinematography by Zágon Nagy (who is also lensing Nemes' Beauty of the Beast) is disrupted only by surreal and lyrical moments that Edina shares with her mysterious client. The film echoes several motifs from Darren Aronofsky's The Wrestler (including accepting aging and one's mortality), although the production design is closer to the lower-budget Euro arthouse drama of Ivan Ostrochovský's Koza.

The low-budget is more of a virtue and a regulatory tool, forcing the directors to make fewer and more precise scenes, which makes the portrait of personal awakening even more intensive without any forced spectacle or grandiose plot twists.

One of the crucial moments in the film is a pig slaughter, an archaic family ritual in Eastern Europe, where the protagonist's awkward interactions with her alienated father reveal not only her background but Edina's almost masochistic desire for approval.

Gentle is a major step forward for Anna Nemes and Laszló Csuja in their international profiles and the best example of a small movie shrouding an archetypal narrative on identity. The extra layer that disrupts the traditional gender perspective moves Gentle a few ranks higher above conventional stories about misfits in the latent pursuit of self-acceptance.