Review: MOONFALL, A Gloriously Stupid Mess Of A Film That Really Hits The Spot 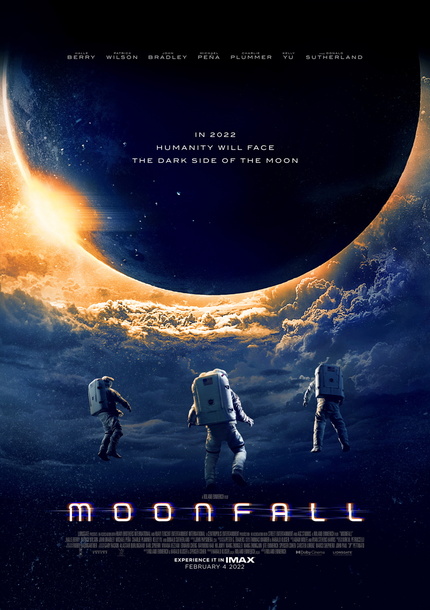 Sometimes when I go to the movies, I just want to see stuff get blowed up real good. In Roland Emmerich's Moonfall, lots and lots of stuff does just that, and it's kind of glorious, but it's also largely incomprehensible trash on such a grand scale as to be almost impressive in its abject disdain for and rejection of logic and craft. But hell, who am I kidding, I don't care how bad a movie is, you tell me the moon is about to crash into the earth and I'm in.

A pre-credits flashback introduces us to washed up astronaut Brian Harper (Patrick Wilson) and his navigator Jocinda Fowler (Halle Berry) in the midst of a life-altering outer space catastrophe. While on a moonwalk with a fellow astronaut, Harper witnesses something attack their craft, sending his colleague hurtling into the depths of space, destined for a cold, lonely death. Destroyed by the loss, and psychologically scarred by what he saw, Harper retreats from the astronaut life, turning into a recluse. Fowl, on the other hand, climbs the NASA ladder by ignoring her past, but the two are destined to meet again.

One day, out of the blue, the moon begins to dramatically alter its orbit, spiraling toward a cataclysmic collision with the Earth. In three weeks. Who you gonna call?

I’ll give you one guess.

It’s a set up we’ve all seen a million times before. Some existential threat presents itself, and only a ragtag group of losers/has-beens/nobodies can save the world. We know about Harper and Fowler, but the wild card is KC Houseman (John Bradley), a conspiracy loon who thinks there’s something more to this sudden calamity, and it has something to do with megastructures – I swear, if you made a drinking game out of the number of times that nonsense word is said in Moonfall, you’d be dead in an hour.

What makes Moonfall different is that is it bravely and brazenly ridiculous at every available opportunity. At each juncture where a logical or sensible decision could be made, Moonfall says, “screw that, make it dumber!”, and we, as a moviegoing audience are all the better for it. It’s an absolute mess that wouldn’t hold up to more than a moment’s scrutiny, but I’ll be damned if I wasn’t stuck to my seat wondering where this apocalyptic clusterfuck was going next.

Emmerich makes one kind of movie, this kind. His previous directorial ventures, Independence Day and The Day After Tomorrow, took similar global threats and turned them into rousing jingoistic celebrations of humanity’s superiority over every possible enemy, be it alien or natural in origin. In Moonfall, he kind of does both, adopting tropes largely invented by ‘70s disaster king, Irwin Allen (The Poseidon Adventure, The Swarm, The Towering Inferno) and giving them a modern, larger than life update. Corrupt government officials looking to nuke the moon? Check. A fractured family looking to reunite? Check. A regular schmuck who knows more than the experts? Check. It’s all here, predictably unpredictable and this is perhaps his most ambitious nutball script yet.

Moonfall is a bad movie by any logical metric, but it is just too sure of itself that it’s kind of charming. The second half reveal of the moon’s true nature – which I will not spoil because I want you to have that joy for yourself – is just so crazy and convoluted and illogical that I couldn’t help letting out a little laugh when it happened. I seriously wanted to give the screen a big thumbs up and say, “hats off to you, movie, you really did it this time.”

At two hours, the film is split very distinctly down the middle into very different halves. The first is the run up to Harper, Fowler, and Houseman’s attempt to save the world. It’s a lot of bureaucracy, stage setting that the world is in a shambles after only a couple of weeks of knowing about its imminent demise, a little bit of character work, and a lot of pseudoscientific piffle that will probably send Neil DeGrasse Tyson to the front seat of his pick-up truck to film an angry TikTok reaction before you can say “megastructurist” (Drink!).

However, when that second half hits, the Moonfall beat really drops, and it drops hard. Not only do we get the heroic trio flying a half-shitfaced, barely operational, decommissioned space shuttle emblazoned with the graffiti slogan, “Fuck the Moon”, we also get some of the most visually baffling CG action sequences I’ve ever tried to wrap my head around. It’s like a live action version of the Lord & Miller Lego movies, complete with a Will Arnett doppelganger in Wilson, it’s as if Emmerich saw the master building sequences in The Lego Movie and thought, “I can do that, but dumber”, and he succeeds wildly.

The movie pretends to have great philosophical and topical concerns to accompany its ‘splosions, but it’s all a lie. Moonfall is the very definition of bombast; hugely complicated, loud as hell, and completely devoid of any real meaning, and that’s just fine with me.  This is easily the most nonsensical film I’ve seen in a long time, and I watched a man strap a queen bee to his testicles in Jackass Forever just the day before.

Moonfall is most certainly not a guaranteed crowd pleaser, for all of the joy that I take from its belligerence toward logic, I am well aware that I’m just a small subset of the sci-fi action fanbase. It’s too long, most of the dialogue is hot garbage, and the storytelling and pacing are all over the place; in short, it’s a disaster. But for whatever reason, Wilson, Berry, and Houseman commit to this bullshit hard, and in spite of its faults, I love it still. God help me, I love Moonfall.

Do you feel this content is inappropriate or infringes upon your rights? Click here to report it, or see our DMCA policy.
Roland EmmerichSpenser CohenHarald KloserHalle BerryPatrick WilsonJohn BradleyActionAdventureFantasy