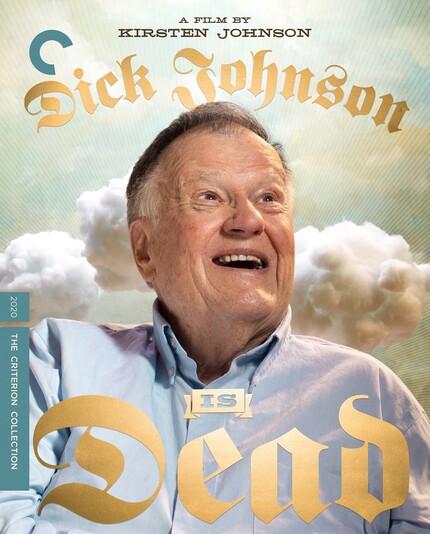 Most of us eventually have to think about the death of our elderly parents. Even though it's 'natural' (generally children outlive their parents), both the practical considerations and the emotional toll can make many of us not want to think about this sad fact of life. Cinematographer and documentarian Kirsten Johnson, being a storyteller, decided to take a different route. And how lucky we are that she did, as the work she created from that love and curiousity is surely one of the best documentaries of recent years.

Criterion's release of Dick Johnson is Dead might seem a little fast (just two years since its premiere at Sundance), and yet one could argue - well, I would argue - that we need it. Johnson's exploration of the life and death of her (still living) father, his decline into dementia and the responsibilites that brings, her boundless love for him, and how they approach his mortality with humour and sensitivity, is a delight and a fascinating exercise. This release adds extra layers to an already layered work, with interviews and an essay that help expand and deepen the experience of the film.

Dick Johnson is not dead, yet, but with the onset of dementia, Johnson realizes that her father will need more care. As they begin to move him from his office and home in Seattle to Johnson's in New York, Johnson and her team begin to stage Dick's death, and his afterlife - with Dick's approval, of course. As they work with stunt men, Dick is killed by a falling air conditioner, a fall down the stairs, stabbed by an errant nail, and then taken to a glossy, confetti heaven, with dancing, movie stars, and most importantly, his late wife. Between these imaginings, Kirsten reflects on her father's life, what he means to her, and their evolving relationship, as now the parent is the one who needs care.

As she demonstrated in Cameraperson, Johnson is not one to take the usual documentary route; her sense of form asks her audience to look deeper into the image, not just to see but to think about why and how we are seeing. We have the more 'traditional' moments, as Johnson documents her father vacating his office of several decades, packing up his home, and adjusting to life in a new city, all while coping with aging and dementia. Johnson talks about her mother (who died several years ago), her own wants and concerns as she takes on the new roles of caregiver.

We're given the more wonderful and, at times, uncomfortable intimacy; but only uncomfortable in the sense that we feel they should be left alone. This is contrasted with the fantasy sequences; the ones where Dick is killed, over and over. But we see how this is constructed, allowing us to feel safe knowing that he is still alive and cared for. The fake funeral, which includes Dick's friends and church congregation, is eerie and moving. There are also sequences created of heaven, or what might be the heaven that Dick will be going to. Jesus performs a miracle on Dick's feet, there are dancers and movie stars, some wear masks of a younger Dick and his late wife. Johnson is looking for the joy in death (and yes, it does exist), the ways we can embrace this inevitability, even for the pain it will cause those of us left alive with the grief.

Dick Johnson is Dead is a unique, intimate, and yes, joyful meditation on dying and death, on the meaning and depth of familial love, and the compromises that must be made to make sure our loved ones find comfort in those final years. We can go gently into that dark night, but we can also go dancing, laughing, and crying. 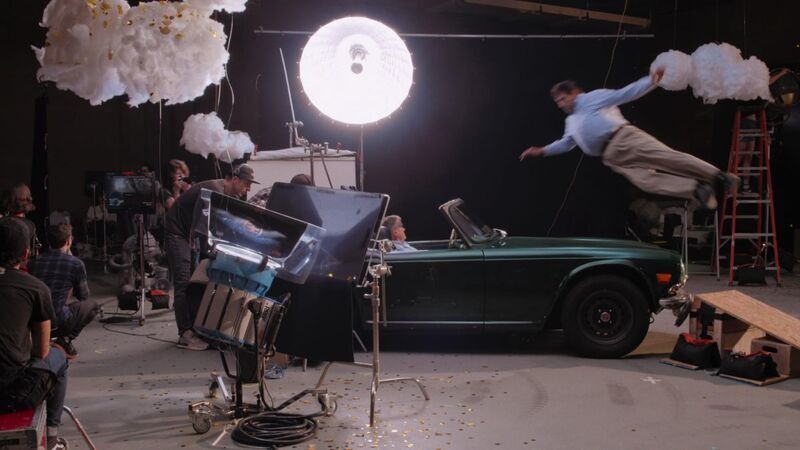 Given that this film combines both handheld, somewhat lofi camera work, as well as studio sequences that have the look of a glossy Hollywood production, a quality master that reflects and respects this difference is essential. The disc is a new 2K digital master with 5.1 surround, approved by the director, and the perfectly balances the quite varying sound and images, so we have the full effect of all the different kinds of movies-in-one that we're watching. Now, given that commentary usually lets us a bit 'behind the scenes' with a film, that which is provided y Johnson, cowriter and editor Nels Bangerter, and documentary sound recordist Judy Karp, is a little different - after all, we already see how they make the scenes where Dick is killed, as well as the creation of the fantasy sequences. The commentary then provides not only ancedotes of the filming, but deeper layers to understand the care they took with Dick, and with supporting Johnson's unusual approach to the film's structure.

Given that the release of the film coincided with cinemas having to go online, a happy result is that screening Q&A's moved to Zoom, which means automatic footage for this release (and archives). Johnson's conversations with fellow filmmakers such as Michael Moore, Mike Mills, Laura Poitras, and Joshua Oppenheimer, cut together so that similar questions reveal Johnson's similar answers. This variation allows us to see how Johnson gives us different perspective depending on the question asked, a comparison we normally never get to have.

There's a wonderful round table discussion with Johnson and some of her producers, Katy Chevigny, Marilyn Ness, and Maureen A. Ryan. They discuss the ethics of this kind of documentary, the imagining of someone's death over and over, and how that would affect the subject as well as the director, given they are father and daughter (a refreshing conversation, given that ethics is not discussed enough with documentaries). They also talk about how unpredictable documentary filmmaking can be (you can't plan for real life), and the various proposed death sequences that didn't make it to the film.

Sound Designer Peter Horner offers great insight into his work on the film. As he notes, sound allows the audience to interpret the images on the screen. And while the sound in a documentary might seem to be simple enough - just make sure we hear the dialogue - in a film like this, it's a unique challenge. There are different tones to be set, dependong on if it's the sound of conversation, the sounds in one of the imagined deaths, or the fantasy of heaven scenes, with music, dance, bubbles, and confetting, all clamouring for attention from our eyes and ears. Different tones mean different soundscapes, and for anyone with an interest in sound design, this is a unique perspective with Horner's work on this film.

Readers of my reviews will know that I have a particular biar towards the wonderful Criterion essays, and 'Falling Angels' by So Mayer is no exception. They do a wonderful job to contextualize the themes of Dick Johnson is Dead - the idea of falling, both literally and figuratively; how the documentary form needs to be broken and remade; the work of being a documentarian, a parent, a child, and most importantly - and the centre of all of these things - a caregiver. Mayer has great depth of perspective into the work of care, and translates what we're seeing in the film through the idea of care.

Dick Johnson is Dead is a loving and honest correspondance between a child and parent, an examination of mortality, a tribute to friendship and care, and a challenge to the documentary form. The Criterion team has done a wonderful job in caring for this precious object.

Do you feel this content is inappropriate or infringes upon your rights? Click here to report it, or see our DMCA policy.
Kirsten JohnsonNels BangerterMichael HilowAna HoffmanDick JohnsonDocumentaryDrama