Review: VOYAGERS, In Space, Hell Is Other (Beautiful) People 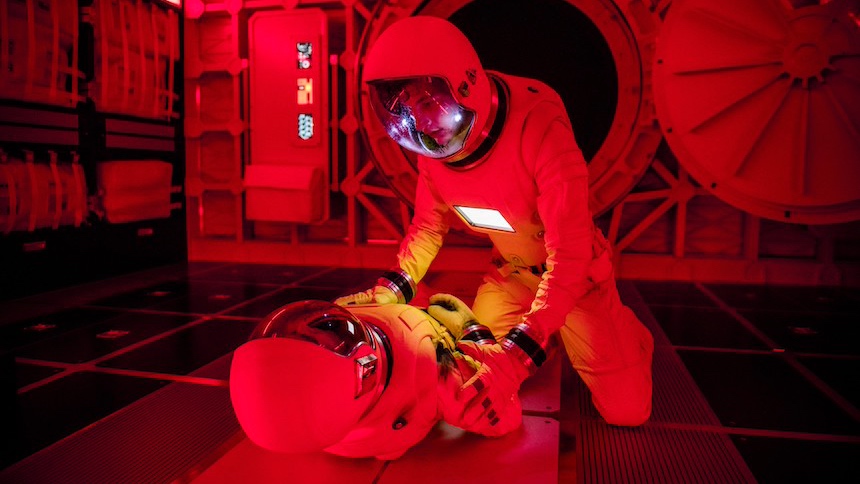 It’s disappointingly closer to the truth than not. Burger, a talented, if frustratingly idiosyncratic filmmaker, introduces potentially intriguing questions, ideas, and themes in Voyagers’s Kubrickian-influenced first act, setting the stage for thoughtful, provocative science fiction, a rarity in the genre, only to abandon that slow-burn first-act approach for a series of commercially driven, surface-deep, perfunctory action beats and a rushed, emotionally muted, ultimately ineffective denouement.

Set in a dystopian near-future where environmental degradation and irreversible climate change has left the Earth dangerously inhospitable to humanity, Voyagers centers on an Interstellar-inspired idea: Taking to the stars to find a new home for the lucky few, in this case, the lab-grown children drawn from the genetic material of the world’s qualitative best (e.g., geniuses, Nobel Prize winners, etc.) and raised in a coldly isolated setting, in preparation for an 86-year journey to the nearest habitable planet that will see them live, procreate, and die aboard a so-called generation ship. They won’t live to see their new home, but their children and their grandchildren will, assuming everything goes according to a rigid plan and next-to-nothing goes wrong on the decades-long voyage.

It does, of course, but not right away. Voyagers initially centers on Richard (Colin Farrell), the only adult aboard the generation ship. Driven by a sense of obligation and without familial ties on Earth, Richard volunteered to lead a mission he, like his charges, wouldn’t see to completion.

When Christopher and Zac, however, discover what the drink does, effectively pacifying and making them easier to control, they naturally feel betrayed, everything they knew or thought they knew undermined. In turn, their relationship with Richard begins to sour. More importantly, Christopher and Zac get hit with a massive infusion of hormonally charged emotions, feelings, and desires.

Sela becomes the object of sexual desire for both Christopher and Zac, though, following their inclinations, predispositions, and personalities, they take markedly different approaches, Christopher respectfully and Zac aggressively. It’s not the first sign, but maybe the most important of Zac as an unexpected, destabilizing chaos agent whose selfish, egotistical, and ultimately sociopathic actions threaten both the mission and the crew’s survival.

Once Zac takes a reductive turn to the Dark Side, Voyagers abandons any pretense to exploring the regimented, rule-bound life aboard a generation ship with any depth and embraces its pulp-adjacent dive into “Lord of the Flies, But With Horny Teens” territory, with a power-hungry Zac stoking the crew’s worst, destructive impulses. Apparently a master manipulator in Burger’s depiction, Zac uses the tools of the demagogue -- fear, uncertainty, and doubt (FUD) -- to intentionally sow conflict and dissension within the crew, creating a primitive, tribal dynamic (Us/Them (Other)) that predictably leads to Christopher and Sela’s losing all power and influence, their ostracism from the in-group, and violence aimed at anyone considered in the out-group.

Given when Voyagers was likely written and actually made (2019), it’s easy to draw a straight line between Zac’s sociopathic, authoritarian behavior and a certain former occupant of the White House. Timing, though, is everything, and right now, there’s a new, decidedly different occupant of the White House. That doesn’t necessarily undercut Burger’s social and political critique, but it certainly makes it feel stale, if not outdated. And once Zac goes full one-dimensional psycho, anything else Voyagers has to offer thematically (e.g., identity, free will, consent) gets thrown out of the nearest airlock. Even a brief denouement meant to be uplifting feels forced and unearned. Spoiler: It’s both.