SXSW 2021 Review: GAIA, Mother Earth Will Have Her Revenge In This South African Eco-Horror 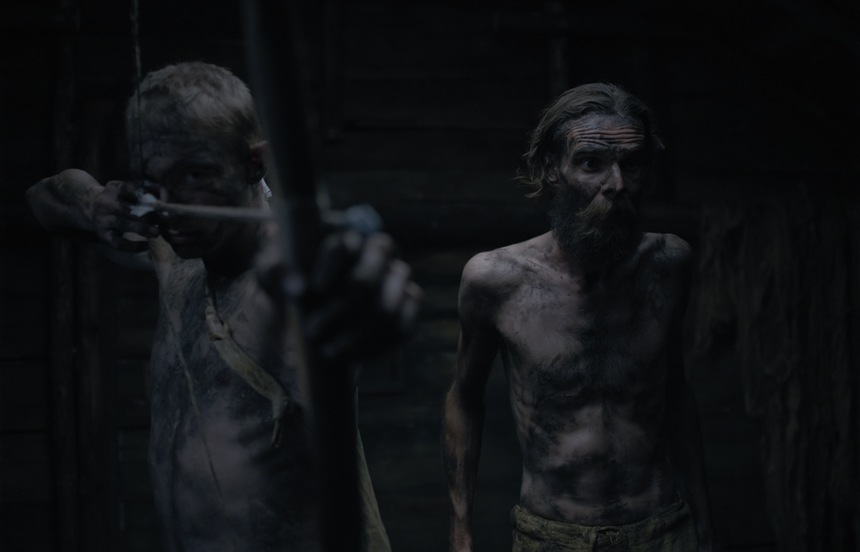 A forest ranger plunges deep into the jungle on a routine observation mission and finds herself face to face with a pair of unkempt survivalists teetering on what seems to be the edge of paranoid madness in
South African director Jaco Bouwer's Gaia, one of the most compelling films in SXSW 2021's Midnighters lineup. Blending ancient paganistic mythologies with modern technophobia and eco-horror, Gaia extends a long tradition of the so-called primitive as sage genre narrative while incorporating old ideas in new ways to create something familiar and fresh.

Gabi (Monique Rockman, Number 37) and her supervisor, Winston (Anthony Oseyemi) abandon their normal river route when a camera drone mysteriously goes down in the forest. Bull-headed Gabi insists they go after the wreckage against Winston's wishes, and the two are soon separated. Gabi stumbles into a booby-trap set by Barend (Carel Nel) and his near mute son, Stefan (Alex Van Dyk). Gabi hobbles her way to an empty cabin, where she soon meets the family, while Winston also finds himself in trouble, though his antagonists seem less than human.

Taken in by Barend and Stefan, Gabi begins to heal, though she won't be finding her way home anytime soon, as whatever has confronted Winston soon sets its sights on the cabin, where here presence seems to have upset the delicate balance of this unusual ecosystem. There's something perhaps not quite sinister, but certainly not friendly out in the woods, something that sees these interlopers as dangerous, and it's willing to do whatever it takes to keep its forest safe from human encroachment and the detritus of the outside world.

Gaia is a relatively simply formulated film; four characters, limited locations, and just enough dialogue to keep the action moving. However, within this contained sphere of action it plays with a lot of big ideas. There are the survivalists who've shed the trappings of a world increasingly controlled by technology and disinterested in maintaining the balance of nature, there's the thing/things in the forest attempting to flush out the human poison from their delicate ecosystem, then there's the concept of the eternal earth mother Gaia at the center of it all.

The film is all about the oneness of all of the organisms and energies on earth, as represented by Gaia and her guardian manifestations. Gabi and Winston are invaders into one of the last protected sanctuaries where balance remains, and Barend and Stefan have found a way to work within that system, to work with the Earth by submission to her demands. With Gabi now added to the mix, they now have to choose; help her to escape and by extension sever their harmonious relationship with their surroundings, or bring her into the fold, and neither option looks very enticing.

Throughout the film, we are privy to Barend's prayers to the “Mother of Creation and Destruction”, his own hastily scrawled scriptures, the history of Gaia's war with humanity and how the rise of industry has put Mother on her heels. Gaia is complex and pointed in its criticism of humanity's unwillingness to place earth first. Gabi watches these speeches not in terror, but enraptured by his faith, if less than convinced as she continues checking her phone – an act that sends the young Stefan spinning as he sees trucks as monsters through his still naive eyes. This encroachment by technology and industry of not only the forest, but their very home sends Barend into a rage, and whatever delicate rapport Gabi had built is now back at square one. Eager to understand, she joins them in a hallucinatory ritual in which their connection with the earth becomes all too real, providing some of the film's most effective imagery.

But it's not all hippie talk. Bouwer punctuates the film with creepy fungal assassins that bring to mind something between Pan's Labyrinth and Matango, oozing flesh wounds, Evil Dead-esque predatory vines, vengeful spores a la The Girl With All the Gifts, all deployed at just the right moments to keep us on our toes. Saturated in sweat and grime, you can practically smell the earth as the film rolls along, but within this there are moments of fertile beauty, a world trying to be reborn, if it can only cleanse itself of the human scourge keeping it in its current weakened state.

Ambitious, but never outreaching its grasp, Gaia is a rock solid eco-horror in the vein of The Ruins, but with much loftier ideas. Bouwer's direction and intermittently flashy visuals help to sell screenwriter Tertius Kapp's bold choices, while the main cast commit fully to their roles in ways that some may have balked at in the hands of less confident leadership. Things that may have seemed silly on the page, such as Barend's frequent bursts of divination directed at a hole in a tree, are carried off with aplomb, making even the empirically goofiest of ideas feel significant. Fans of all stripes should find something to latch onto here; come for the fungus monsters, stay for the quasi-Biblical allusions, and it'll be hard to leave disappointed.