Review: THE INHERITANCE, An Ode to Black Resistance and a Fitting Cinematic Experiment for the BLM Era 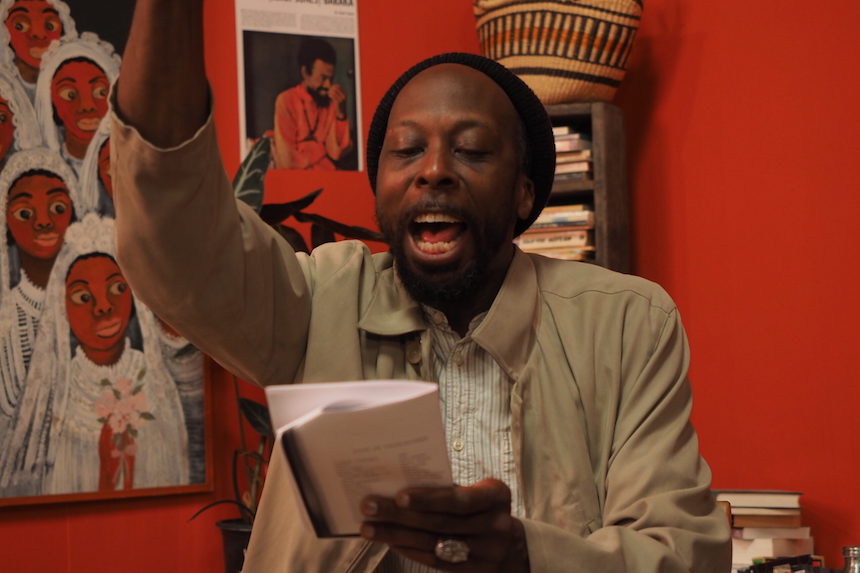 Philly native artist/filmmaker Ephraim Asili's experimental whatsit, The Inheritance, draws from his days as a member of the West Philadelphia Black radical collective, where a group of like-minded young African American activists and artists lived and shared their thoughts and ideas in a communal setting. The idea was heavily indebted to MOVE, a Black liberation group founded by John Africa and his followers, who preached the importance of self-sufficiency and living in harmony within nature.

A loose narrative concerns Julian (Eric Lockley) and Gwen (Nozipho Mclean), childhood friends who move in together when Julian inherits his late grandmother's multi-story house in Philadelphia. The grandma also left behind myriads of Black cultural artifacts, such as books, magazines, and records, most of them from the Black liberation era. They decide to take in roommates -- philosophers, educators, artists, and activists -- and open the place up to the neighborhood as a communal space/library.

The film's staccato, but unhurried episodic structure gives way for Asili to interject with much archival footage: Shirley Chisholm's Presidential campaign, MOVE's standoff with police in 1978 and the police bombing of the MOVE compound that took 11 lives in 1985. It also features Black liberation luminaries such as Mike Africa Jr and Debbie Africa, and renowned poets Sonia Sanchez and Ursula Rucker, who appear on screen as guests in Asili's narrative universe.

The Inheritance's freewheeling form owes a great deal to Godard, right down to the brightly colored walls, editing and the constant, exaggerated noise of a 16mm camera rolling. Asili doesn't try to hide his influence by putting a giant poster of La Chinoise as a centerpiece on the living room wall. His intention was to make a hip-hop/reggae version of Godard's agitprop classic.

The film is heady with many memorable quotes from Black liberation era thinkers and writers, often provided by giant black boards located on the wall, and Julian, Gwen and others repeat many of the quotes in dramatic fashion, looking straight at the camera. But in Asili's hands, The Inheritance doesn't feel like a dogmatic film. There are many funny moments as the residents of the 'house of Ubuntu' have to deal with communal living, following such strict rules as 'no shoes inside the house,' 'don't eat someone else's food in the fridge without asking,' and so on.

Rather, this airy fusion of a filmed experiment gives opportunity to its unsuspecting viewers to explore a window to those people who are unseen/under seen, as well as unheard/under heard pieces of American history that give them the proper context to understand the current political climate: the continuing police brutality against the Black community, the BLM movement, and the white supremacists storming the Capitol building.

In its rather conventional movie ending, Asili closes his narrative part of the movie on a positive note. But we all know that there's more work to be done. The Inheritance is an ode to Black resistance and a fitting cinematic experiment for the BLM era.