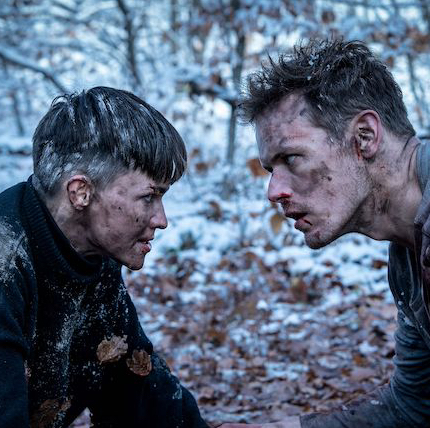 Adapting writer Andy McNab’s novel of the same name, veteran TV director Magnus Martens delivers the kind of forgettable, time-wasting thrills of the uber-masculine kind that make SAS: Red Notice (the “SAS” stands for “Special Air Service,” the UK’s equivalent of the Navy Seals or Army Rangers) a perfect fit for a mid-pandemic VOD market. As a wannabe series or franchise-starter — McNab has two other books ready for adaptation — SAS: Red Notice will leave even the most diehard action fans feeling left out.

SAS: Red Notice centers on a typical “best of the best” hero, Tom Buckingham III (Sam Heughan), a top-level SAS officer with a very special set of skills focused primarily on eliminating foes, real and potential, with a combination of minimal effort and extreme prejudice. Being an efficient killing machine for the Crown, however, has its drawbacks, including a profound inability to open up emotionally to his longtime girlfriend, Sophie Hart (Hannah John-Kamen), a medical doctor, and taking their relationship to the next, matrimonial level. He takes lives, she saves them, and at least at first, it doesn’t appear they’ll find anything like common ground, potentially dooming the regally named Buckingham to a lifetime of manly loneliness and/or wandering the earth to find a better suited romantic partner.

Buckingham, however, has an even better idea: Surprise Sophie with a surprise trip to Paris via the Channel Tunnel, where he hopes to get on bended knee and propose. Of course, the best-laid plans of SAS officers on leave go immediately awry when Buckingham and Sophie find themselves in a Die Hard-inspired situation involving ruthless mercenaries led by Grace Lewis (Ruby Rose), the earlier target of the film’s “red notice” (a super-serious warrant served on the most dangerous of criminals), her weak-minded brother, Oliver (Owain Yeoman), and a group of mostly faceless, disposable henchmen. Grace and her mercs hijack the tunnel train, stop it dead in its literal tracks, and demand a ransom in the amount of 500 million pounds in exchange for the safety of the passengers.

While Buckingham predictably springs into action-hero mode, dispatching one or two expendable henchmen along the way, he’s soon separated from Sophie, forcing him to recalibrate his “kill them all, let a deity sort them out” approach for a gentler, kindlier one. Also in response, the sclerotic UK government sends a SAS counter-terrorism unit ostensibly led by Major Bisset (Noel Clarke), but clearly controlled by George Clements (Andy Serkis), a shadowy government operative without portfolio eager to silence Grace and her mercs for their involvement in a UK-backed massacre in Georgia. The SAS unit also includes Buckingham’s long-time friend and comrade-at-arms, Declan Smith (Tom Hopper). Somewhere in or around the SAS unit, however, a traitor lurks, collaborating with Grace for a share of the proceeds.

SAS: Red Notice betrays its origins as a novel almost from the get-go, beginning with an overlong prologue in Georgia that introduces Grace, Oliver, their father, William (Tom Wilkinson), a self-described psychopath and the owner-found of their mercenary group, and Clements. Grace’s carelessness with the operation (she repeatedly fails to notice a young woman with a cell phone) leads to the “Red Notice” of the title, a North London raid that feels undernourished (because it is), and finally, the Channel Tunnel and the train where most of the action unfolds. By then, though, a solid 40 minutes have passed unnecessarily. Martens would have done everyone a favor — specifically the audience —if he had lopped off a solid 10-15 minutes from the opening section, but apparently fidelity to the source material mattered more than creating an efficient, entertaining action-thriller that thrives with an action-first, story-second approach.

Still, whatever its shortcomings execution- or story-wise, the “Die Hard on a stalled/hijacked train” premise is hard to resist, especially in the second hour, once Martens leaves the table-setting behind for the usual assortment and combination of complications for Buckingham to overcome. Outlander veteran Sam Heughan makes for a solid, if all too often stolid, lead while Hannah John-Kamen makes the most of an underwritten role.

In an all-too-brief role, Tom Wilkinson elevates otherwise limited material. Once Wilkinson exits to collect his paycheck, SAS: Red Notice noticeably deflates for the better part of a half-hour, buoyed only by Andy Serkis’ slithery line deliveries as an amoral, villainous government functionary.

SAS: Red Notice will be available for purchase via Sky Cinema on March 12th. 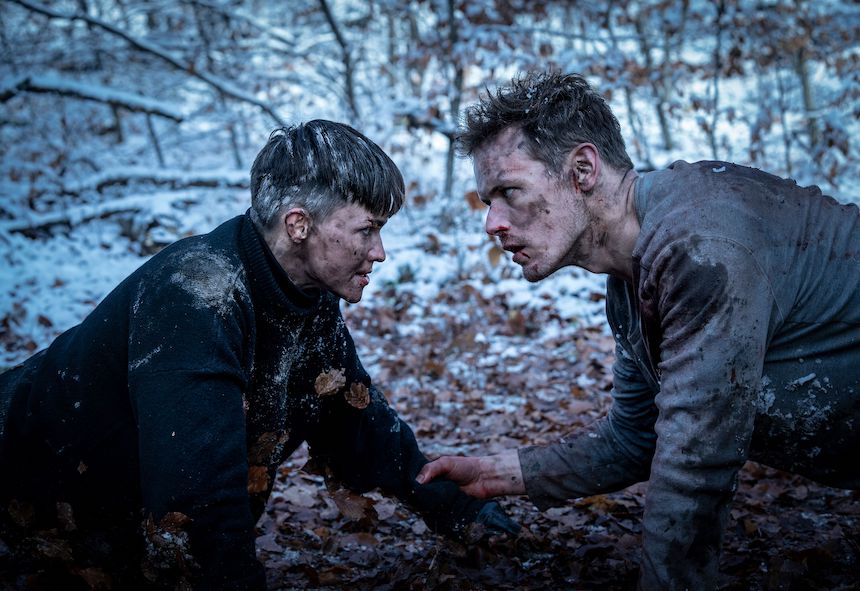