Miami 2021 Review: LUDI, A Day in the Life of the Invisible 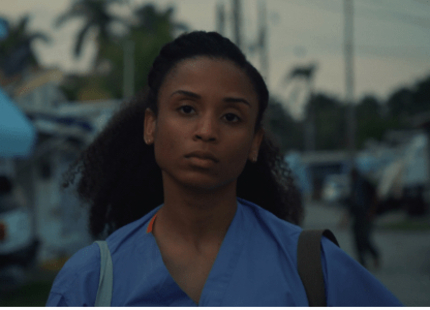 Likely no one believes more in the mythologized dream of better living in certain western country than immigrants. Whether those dreams be based on the truth or not. And in these pademic times, our thoughts have turned often to front-line workers, who care for the elderly and infirm, who sells us our foods and other essential goods, who are keeping us going, and again, are often immigrants and from marginalized groups. What makes them take these jobs? Is it solely necessity? What are their lives and their contribution? What are their connections to their homeland, their new land, and the space between in which they exist?

Actor and filmmaker Edson Jean's feature film debut Ludi looks at a day in the life of Ludi, a woman who immigrated to Miami when she was 10 years old, and works in a care home. She exchanges tapes with her family back home; she hears stories and laughter, and requests for money. And Ludi wants that extra money, so she agrees to cover a shift with a private care group, for an old man who is quite vocal about not wanting her there, but Ludi has little choice but to keep with the job.

Ludi (Shein Mompremier) has to navigate a demanding and somewhat precarious existence: renting a decent but small place from Blanca (Madelin Marchant), who used not-so-subtle manipulation and guilt to get Ludi to do what she needs. Ludi and her care home co-workers all are struggling for money, and who is more deserving of the extra shift. And Ludi's loved ones back home, they need her help too, and maybe she's not as honest with them as she should be about how she struggles. It's not so much pride, as she doesn't want them to worry about how much she struggles.

Enter George (Alan Myles Heyman), the man Ludi has been charged with looking after for an evening. He has no idea who she is or why she's there, and yells, tries to bribe her, and even tries to escape rather than accept any help, despite what he might need. He has his own troubles: children who seem disinterested in his well-being, forced to live somewhere he hates, forced to accpet help he doesn't want, and the failure of his body that comes to us all with age, even if we can't face it.

What follows is not necessarily unexpected, but gives time and space to characters who are thrown together by necessity, at first clashing, then finding some, if not common ground, at least understanding, Jean's camera is never intrusive, but it doesn't shy away from the story, or George and Ludi, as they navigate the literal and metaphorical space between them, and the space between themselves and where they want their lives to be. Ludi is at one end, trying to find her future and her meaning in a city she loves, but one that doesn't let her thrive; and George at the end of his life, clinging to every bit of independence he has left. These are two people struggling against not only the odds the society and culture has stacked against them (age, class, status), but the individuals in their lives, who have their own troubles that keep them from seeing each other's pain, though sometimes there are small moments of joy.

By giving us just this one day in Ludi's life, and an evening in George's, Jean asks us to pause and look at that person we might not take the time to understand, especially those who are the essential fabric of American life. Ludi is a quiet and thoughtful film that takes a piece of a life to show intertwined and complex existences too often overlooked.

Do you feel this content is inappropriate or infringes upon your rights? Click here to report it, or see our DMCA policy.
Alan Myles HeymanEdson JeanLudiMadelin MarchantMiami Film Festival 2021Shein Mompremier