Shorts That Are Not Pants 2020: These Shorts Are Made for Watching 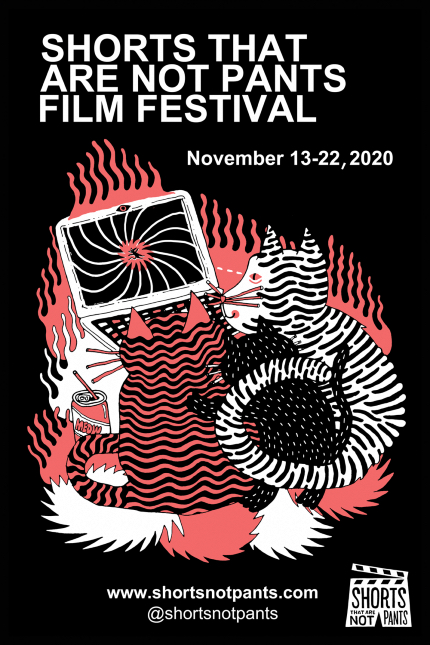 Without wading into the obvious and undeniable existential question -- why are shorts not considered pants? -- let's just cut to the chase and share the announcement that the film festival known as Shorts That Are Not Pants will be held between November 13 and 22. The full lineup and schedule have been revealed; furthermore, tickets and passes are now on sale.

As I've come to expect from everything Canadian, prices are very reasonable: pay $25 and gain entrance (virtually, of course) for you and your whole household to the entire program during the festival dates. Why would you want to do such a thing, beyond the fact that our own Shelagh Rowan-Legg is a member of the programming team?

Launched in 2009 by Toronto film blogger James McNally, Shorts That Are Not Pants has endured and expanded over the years into an essential event. The festival notes: "Films are unrated and should be watched by those aged 18 and over only. Films can only be watched by those within Canada," which deprives those of us living in the Lower 48 from sampling any of these pleasures at the present time.

Here are a few that grabbed my eyes:

705: Written and directed by Samantha Henry. "A character lives in an inhospitable world, but they start their day just like many of us; with a fresh cup of coffee." (Impertinent editorial note: Just like me!)

Cayenne: Written and directed by Simon Gionet. "During her night shift at a remote gas station, a female clerk agrees to help a man whose car has broken down. While they both attempt to repair the vehicle, the driver's intentions leave the young woman uncertain. In the middle of the deserted parking lot, an air of apprehension fills the night as the events of the evening unfold." (Impertinent editorial note: I like cayenne pepper on my eggs in the morning.)

Wade: Written and directed by Upamanyu Bhattacharyya and Kalp Sanghvi. "In a version of Kolkata, India rendered unliveable by sea level rise, things take a dark turn when a family of climate change refugees are ambushed by a tiger on the flooded streets: (Impertinent editorial note: I am afraid of tigers. Also, I like animation.)

Even if you do not live in Canada, the site offers snappy descriptions of the short films as well as trailers, in some instances. If you live in Canada, I assume you are smarter than me and are already reaching for a card so you can purchase a pass for Shorts That Are Not Pants. Enjoy!