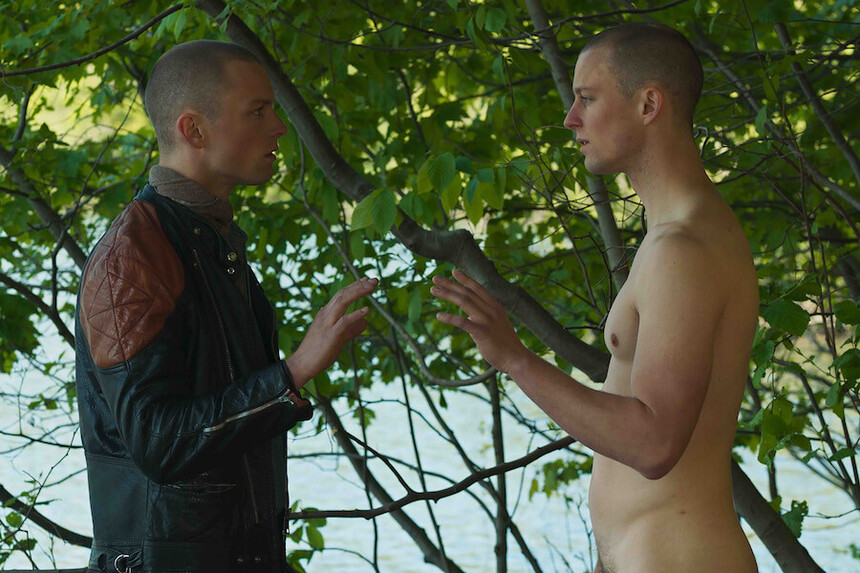 There are always at least two things you can count on with a Bruce LaBruce film: one, that you won't be able to predict where it will go, and two, that there will be a lot of sex. Both of these are good things, and why I always look forward to a new film from him (even if I don't always enjoy them). As someone who makes a point of always keeping outside of the canon, far from any other filmmaker who we might consider an 'outsider', never comforming or compromising, LaBruce always has something new up his proverbial sleeves.

Saint-Narcisse certainly wears its themes on its sleeve, but again, this works; not that LaBruce can't be subtle, and there are beautiful, subtle moments, words, and gestures that add to the story. Part fairy tale, part morality play, part cult film, the film plays its games with identity, sexuality, power, lies, control of the old over the young, and a culture that, while set in the past, reverberates to the present.

In 1970s Montréal, Dominic (Felix-Antoine Duval) lives what seems a fairly cavalier existence, dreaming about random sexual encounters with hot women in laundramats, while still looking after his elderly grandmother. When she dies, Dominic discovers letters from his mother, who he was told had died years ago. He drives to the village of Saint-Narcisse to find her. There, her discovers his mother (Tania Kontoyanni), who thought Dominic had died as a child. Turns out, she was ostracized for taking a woman as a lover while pregnant, her child was taken away, and her lesbian lover's daughter Irene (Alexandra Petrachuk) now lives with her as her new lover. But Alexandra also wants Dominic, and it seems that amond the monks of the nearby monstary is one who looks exactly like Dominic.

Dominic is never without his polaroid camera; selfie culture is not a recent phenomenon, and Dominic's swagger comes from his (understandable) confidence in his beauty and sexual prowess. The only things that do make him vulnerable are his mother, and it seems, himself. Though this lookalike monk turns out to be his long-lost twin brother, Daniel, raised in the monastery. Daniel has that same genetic disposition towards self-confidence and swagger, but he also is vulnerable, this time with the Father Andrew, who believes Daniel to be a reincarnation of Saint Sebastian, and has molested Daniel since childhood. The image of Saint Sebastian is almost the antithesis to Saint Narcisse: sacrifice versus selfishness, marking the two poles from which the twins drift.

The film almost has a hazy tinge to it, as Dominic, Irene, and Daniel all circle each other in a semi-permanent state of arousal. As the twin's - ahem - narcissism and self-obession leads to what might be called the ultimate moment of masturbation,so they look beyond themselves, at least for a moment, and see the other, the other side of that coin flip determined at their birth. LaBruce doesn't just expose Catholic hypocrisy towards queer identity, he questions any and all boundaries imposed by either either religion or society on relationships of sex, love, and community.