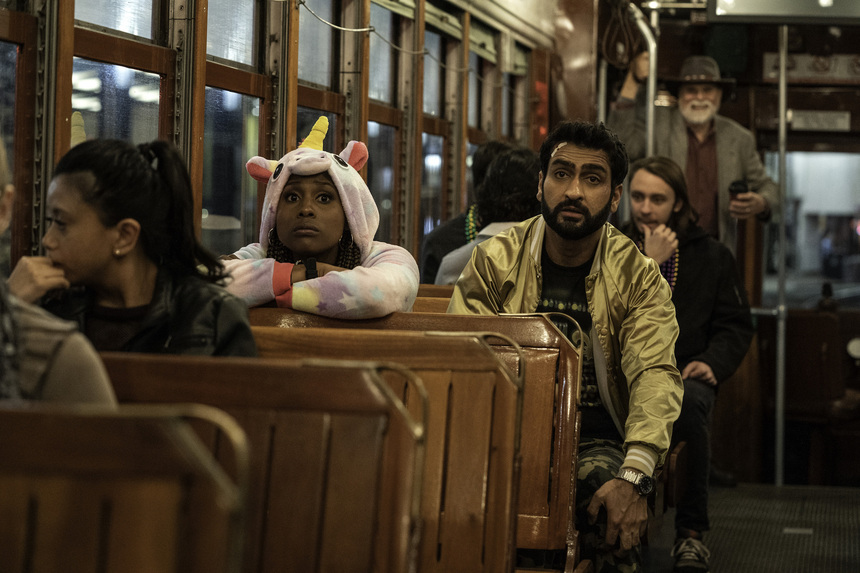 Formulaic films exist for a reason: people like to know what they're going to be watching. Now, formulas can be tweaked over a long period so changes are slowly introduced that are more palatable to new generations, but still, people like the formula because they know what they're paying for. Case in point: The Lovebirds. Directed by Michael Showalter (The Bick Sick, Wet Hot American Summer), and starring Issa Rae (Insecure) and Kumail Nanjiani (The Bick Sick), this combination of talent means you would expect a funny story tinged with serious moments, some good physical and verbal comedy, and hopefully, a couple with enough chemistry to pull it off.

Luckily, The Lovebirds more or less delivers on its promise, thanks mainly to the talents and chemistry of its two lead actors. There is some ground broken (an interracial couple with two people of colour headlining a major studio release, where their race is not the central theme), but this is a modern take on the screwball comedy - fun, a bit dirty, with some great quips and physical escapades that should entertain on an eveving at home (though likely would have benefitted with a cinema full of people laughing.)

After an adorable beginning, Jibran (Nanjiani) and Leilani's (Rae) relationship has finally fizzled out after four years; Jibran is a nervous, risk-averse documentary filmmaker who still hasn't finished his film; Leilani is an ad executive who is glued to her phone and wants adventures like she sees on instagram, and the magic just isn't there anymore. On their way to a dinner party, they break up. But before they can say even another sentence, Jibran accidently hits a cyclist. Then another man claiming to be a cop gets into their car, runs the cyclist over until he dies, then runs away. Thinking they will be framed for the murder, the lovebirds run away, and figure they have to solve the crime themselves to clear their names.

Much of the plot description is easily inferred from the trailers, as is much of the rest of the film (somewhat of a riff on Date Night with a lot of Game Night thrown in). Again, this formula is a formula for a reason: get the right combo and it works, even if there are plot holes you could drive an oil tanker through. What matters is not *what* happens (we know the couple will be fine in the end), but how - both how they tackle the problem, and how they deal with each other. Setting them up as a couple who have literally just ended their relationship gives plenty of room for the pair to exchange some witty banter while they get into some serious trouble.

Because we know the couple will be fine in the end, and the story must keep them on the move, we know what's coming is a series of scenes of them in different locations, putting together the pieces of the puzzle while they get hurt or hurt others and always banter. So they have to choose between being burned with bacon grease or being kicked by a horse while they talk about how Leilani came up with a body wash campaign; wearing cheap yet stupidly charming clothes bought at a drug store; arguing what 'fuck boy' means, sing along (badly) to Katy Perry, and making some decent jokes about crazy white people and their obsession with Eyes Wide Shut.

What keeps the material moving is Rae and Nanjiani. They are consumate performers on their own; as they've shown in their own shows and films, they each have a knack not only for comedic and dramatic line delivery, but they know how to infuse one with the other (or let the comedy or drama stand on its own). Together, they are completely believable as a couple who have fallen out of love, but then figure out how to work together in a dire situation, reading each other (or not) to get the job done. Also believable as a couple who would get into that kind of trouble (plot holes and everything), and manage somehow to get out of it.

The Lovebirds might not be leaning very far into new territory, but it's entertaining and funny when we all need to watch something that has nothing to do with the current hellscape we're living in. It's worth it to watch two great performers who are only just hitting their stride, see New Orleans as a city and not just a tourist trap, and get outside our own spaces (metaphorically) even if only for 90 minutes.