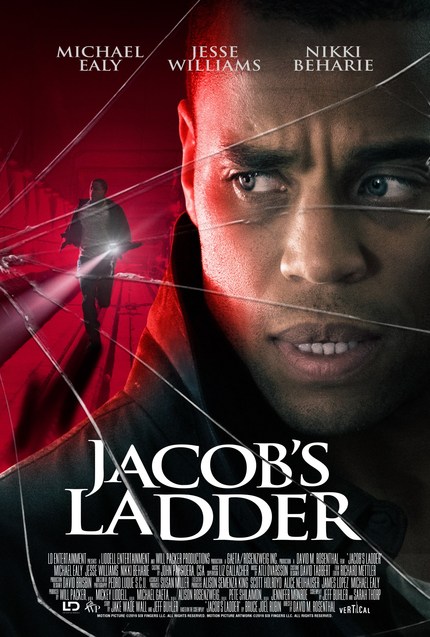 Adrian Lyne’s 1990 film Jacob’s Ladder is one of those films you really shouldn’t touch. It remains one of the best examples of psychological horror with its unforgettably eerie imagery and a story that makes you question everything that’s happening on screen until it’s over. As a film, it’s also been fully embraced by the horror game community as it’s heavily influenced Silent Hill and so many others. Seriously, no one should have touched this movie.

But here we are, almost 20 years later and director David M. Rosenthal is taking a crack at it whether we want it or not. While I can’t say I liked this movie, Rosenthal changes the story enough so it doesn’t feel like a lazy remake, but it’s just one that doesn’t stand out compared to its predecessor.

In the story, Jacob Singer is a doctor who’s recently found out that his brother Isaac, who he thought was killed in Afghanistan, is actually alive and has been living homeless on the streets. After Jacob takes him home, he starts to realize that sinister forces are possibly coming after him and he has to unravel this mystery before it consumes his life.

Thankfully the writers did not just take the story of the original film and shoot it with new actors and an updated modern day location. As I was watching the film, I kept on thinking that certain plot points were going to happen like in the original and they didn’t, so at least it has that going for it. The movie focuses more on the troubled relationship of Jacob and his brother who has an addiction to a PTST drug that could be the root of all their problems. This is something I was suspecting they might do when I first heard about the remake. The “ladder” drug that was in the original film only comes towards the end of the movie and it didn’t feel so necessary to me when you look at the grander scheme of story. But sure, it’s a possible explanation and it’s something to base the new movie off of. A war vet battling with visions of the past and dealing with a drug addiction could definitely make for some compelling drama. Throw in the fact that his brother was also dating Jacob’s wife before they went off to war and you have even more reason for things to all come crashing down later.

Sadly, the film just lacks imagination in terms story and shot composition. Nothing felt visually unique enough to catch my eye and while I liked that it didn’t follow the original’s story exactly, I did get pretty bored with how information was fed to us. Oh yeah, and just like the original, there are potentially supernatural elements haunting the protagonist and it’s all handled very…….un-originally. Please stop showing someone in the background of a character, cut away, and then cut back to the person no longer in the background. It’s not scary and it’s a tired trope of the genre. One of the things that made the original so memorable were how they showed that some people were not exactly human and the little physical deformities that made you question their true nature. This film doesn’t go that route but decides to just have men in black clothing stalk Jacob with some poor attempts at jump scares and really obvious CGI shaking head movements.  You’ll definitely notice how bad this effect looks here when compared to the original’s hospital scene and the man with the black hood over his head.

What’s also a shame is that the actors seem like they’re really trying to sell these characters and in certain instances it does work. I’m a big fan of Michael Ealy in the canceled sci-fi Fox series Almost Human and he did a good job at portraying Jacob with subtle charisma and a genuine concern for his brother and wife. His eventual breakdown is even kind of heart breaking because the actor does sell it. The issue is at that point in the movie, I didn’t care about what was happening, the revelations were pretty expected, and I wished that we got a better fleshed out script. I really wanted to like Jacob but his quest for answers was just too boring, both visually and narratively.

What could possibly be the main problem with this film is that it’s using the name of a classic horror movie and it definitely does not compare very well at all. I feel this story would have been more forgivable if they just named it something else and it just wore the “Jacob’s Ladder influences” proudly like so many others. As it stands, the new Jacob’s Ladder film isn’t sturdy enough to climb and you’re better off ascending with Adrian Lyne’s masterpiece.

Zero lends his thoughts on martial arts to the Fists of Fail podcast and also creates drink along reviews called Only Nice Things.