The new dinosaur film is as big and dumb as most of its predecessors, but there are moments of beauty, and ideas which sting.

For the past quarter century, the Jurassic Park films have been synonymous with summer blockbuster fare. Based on Michael Crichton's novel (itself an inferior re-working of his own Westworld) the first film in the franchise set the world alight in 1993 with its groundbreaking special effects and use of Digital Theater Sound. Granted, it was one of Steven Spielberg's dumber films, speeding over both cerebral moments and plot holes in favor of thrills, but he was masterful in building up anticipation for some truly rewarding money-shots. And the term "money-shots" should be taken literally here, as the impressive leap forwards in visual effects was astronomical in cost, so their use had to be limited to mere seconds.

Those restrictions no longer count these days, and 2015's Jurassic World could liberally splash dinosaurs of all shapes and sizes over 3D IMAX screens worldwide in wild abandon. The fourth film in the franchise, it surprised everyone with its staggeringly huge success at the box office. After a hiatus of 14 years, it seemed the world was hungry for dinosaur chills, thrills, and kills, with an added mosasaur for some spills. It even prevented the much awaited new Star Wars film that year from breaking ALL records. Apparently audiences appreciated the film delivering upon the promise of the first Jurassic Park: what if it's not just a few people with a few dinosaurs, but a fully functioning theme-park with thousands of people and thousands of dinosaurs? Wasn't that secretly what we all had wished for to see in a sequel, for more than twenty years? 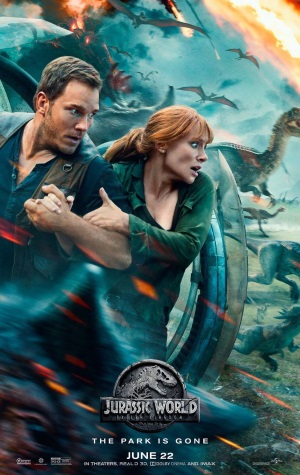 And now we get the inevitable follow-up: Jurassic World: Fallen Kingdom, and watching it, I couldn't help but wonder if this is what the world is hungry for now. This time, the excuse to get dinosaurs and people chasing each other again is the most outlandish yet: the island on which the two parks have been built is about to be destroyed in a cataclysmic volcanic eruption, meaning the efforts in all previous films were doomed anyway even if everything had gone right (but I digress).

Jurassic World's lead characters Claire and Owen return, and get given a big budget by a benevolent billionaire (uh-oh...) to go save as many dinosaurs as they can, including Owen's lethal pet raptor Blue. Action shenanigans ensue, now not just involving dinosaurs but also fake-looking lava. Surprise surprise, the billionaire turns out to have a secret agenda, and surprise surprise, it is not a benevolent one. Can Claire and Owen get all the worms back in the can this time?

The director for this particular outing is Spanish filmmaker J. A. Bayona, of The Orphanage fame, which is an interesting choice to say the least. No matter how stupid the film gets (and it probes some depths here, ladies and gentlemen...), Juan Antonio never forgets to make things look good, and some of the compositions are visually stunning. And as silly as the volcano story is, it turns out to be just an intro to a much darker second half, in which the franchise's Frankenstein themes get unexpectedly dialed up to eleven.

A friend on social media wondered if anyone else had picked up on certain Holocaust themes in the film, and while I laughed that off as over-analyzing nonsense, now that I have seen the film it is a damn hard idea to ignore. I saw this film with a group of 13-and-14-year-olds, as part of a birthday party, and they all loved the film. But interestingly, the first thing happening after the film ended was a discussion about the film's final conundrum, and everyone chimed in on what they would or would not have done in that same situation.

Without wanting to spoil too much, the film turns a surprisingly sharp corner near the end. Sure, in its finale you get all the excitement and thrills of seeing under-armed people being chased by a huge lethal predator, same as with all the previous films. But the responsibility question, so casually glossed over in earlier episodes like Jurassic Park II: The Lost World (p-tui), gets repeated here until the heroes can no longer be left off the hook. Once you do get your worms back into the can, what do you do with the can?

Days later, I'm still mulling over moments and ideas from the film, and while I'd hardly label Jurassic World: Fallen Kingdom film as "excellent", this warrants merit, right? I'm not sure if this is what the world is hungry for, this year. I do know I appreciate the thought, though.


Jurassic World: Fallen Kingdom will be in US theaters from June 22nd onward, and is out now in Europe.