Review: BEYOND THE CLOUDS Finds Human Compassion In Times Of Antagony 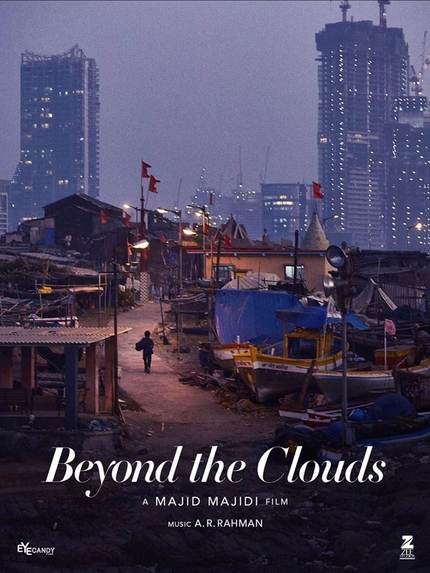 Celebrated Iranian filmmaker Majid Majidi makes his first foray outside of his homeland with Beyond the Clouds, a story of Indian siblings brought together by circumstance and separated by prison bars. While Majidi made his name expressing his truth through realism, here he succumbs to the rhythms of Mumbai filmmaking a bit too frequently, taking an already engaging story and wrapping it in layers of melodrama and an unusual sweetness that sabotages any kind of consistent tone he may have been aiming for. For a film as technically accomplished as this, it's a bit of a disappointment, but Beyond the Clouds has plenty going for it, it just feels like someone forgot to connect he dots.

Amir (newcomer Ishaan Khatter in his first feature lead) is a low level dope delivery boy in Mumbai. His days are spent speeding up and down the alleyways and avenues of the south end of the city delivering packages to dealers. When his supplier is raided, Amir makes a run for it with a brick of some new stuff he was supposed to deliver to a local kingpin. He takes off to meet up with his estranged sister Tara (Malavika Mohanan), a worker in an outdoor laundry, and asks her to keep it for him while he's on the lam.

When Amir runs off to hide while the heat is on, Tara is unwillingly pulled into a confrontation with a neighbor that ends with him in the hospital, her in jail, and Amir struggling to save them both. From here the film has trouble finding a cohesive story as the narrative bounces back and forth from Tara's unjust imprisonment in an unkempt women's jail-block littered with the children of its inhabitants, to Amir's desperate attempts to free her by getting the neighbor, Akshi (Gautam Chose), to awaken from his condition in the hospital and clear Tara of wrongdoing so she can be released.

It's clear by the nature of the overwrought emotion in the film that Maijidi had a lot to say with Beyond the Clouds. The film intends to illuminate any number of the societal ills that plague India from poverty to the corrupt legal system to the domination of the poor by the local mobs to the struggles of migrant workers in the overcrowded Mumbai slums. In doing so it spreads its efforts a bit thin, all the while sprinkling the film with sequences of frenetic action that certainly liven up the proceedings, but at the same time seem a bit out of place with the central, and frequently solemn themes of the film.

All of this action, tragedy, humor, and drama is propelled by an ever present score from Oscar winner A.R. Rahman that, while typically solid in his own style, seems a bit too much for the surroundings. A stranger in a strange land, Majidi's film attempts to use the rhythms of Bollywood without fully committing to the form, leaving this film as a bit of a half-baked effort that, while certainly worth watching, is far from a masterpiece, and will leave viewers a bit confused as to exactly what it is trying to say.