Review: AVAL Turns Indian Horror On Its Head With A Topical Possession Story 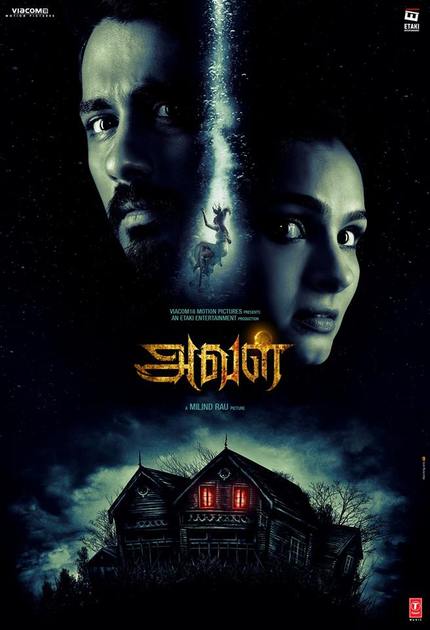 While India hasn't exactly been a hotbed of internationally recognized horror films at any point in its long cinema history, the perception that all the country has to offer are glitzy musicals is slowly beginning to give way to the reality of a wildly diverse cinema culture that is ripe for discovery. One region of India that has taken the terror bull by the horns over the last decade is the southern state of Tamil Nadu and its Kollywood film industry. The latest offering from this movie-crazy part of the country is debutant director Milind Rau's film Aval, and it's unlike anything that India has made in a long time.

It's true that Tamil Nadu has been a safe space for horror films in the mainstream marketplace, however the vast majority of these films have been extremely broad horror comedies. Not that I have any problem with that, the region has produced some off-the-wall genre gems in that time frame; everything from the wackadoo transgender ghost story Kanchana to the Frighteners-esque Massu to the genre mash-up zombie outbreak comedy Miruthan have kept me in stitches for years. The one thing they hadn't quite mastered was the straight faced horror film, in the oeuvre thus far, a tongue was always stuck firmly in cheek. Until now.

Aval is as close to a straight horror film as India has produced in any language in a long time, and while it isn't perfect, it's a wonderfully effective piece that made me jump in my seat more than once. Borrowing liberally from established genre classics while putting a topical Indian twist on the core subject matter works well for Rau and producer/star Siddharth in this story of an ancient evil returning to complete a ritual left undone.

Dr. Krish (Siddharth) and his wife Laxmi (Andrea Jeremiah) are a happy couple living an outwardly quiet, but inwardly passionate, life at the foothills of the Himalayas in north eastern India. When the empty estate across the street gets a new set of occupants in the D'Costa family, things start to get weird, then weirder, then downright violently crazy. The D'Costa's daughter, Jenny (Anisha Angelina) starts to act even stranger than her usual teenaged self, and ultimately it becomes clear that she's become possessed by a Mandarin speaking spirit who warns the family to leave the estate or they'll all die. When modern medicine and psychiatry can't solve the crisis, the family calls in a spiritualist to take the reins, but it may be too late. This spirit wants blood, and won't leave until it gets it.

As much as I enjoyed Aval, and I did quite a bit, there's not much new for fans of Hollywood horror. The film utilizes tropes and familiar visuals from a dozen modern classic horror films over its two hour run time, but the magic is in the way they are used. Milind Rau is a long time collaborator of one of India's greatest working filmmakers, Mani Ratnam, and the opportunity to study at the feet of a master has definitely paid off. Rau is able to manipulate easily recognizable images to suit his needs, all while drawing the audience deeper into a conflict that goes more than just skin deep.

This being a possession story, the major influence is The Exorcist, a film which is name checked as Blatty's novel is shown in Jenny's hands several times. However, Rau isn't afraid to repurpose the best parts of The Shining, Ring, Poltergeist, The Conjuring, and a dozen others in search of the perfect mix. Amazing as it may sound, it actually works. Aval is a film that is not only greater than the sum of its parts, it's also an amazingly effective attempt at straight horror that homegrown Indian audiences have been begging for for years.

Aval isn't all doom and gloom, though, as Rau manages to maintain a hint of the masala flavor and Indian sensibilities in this unique project. Bold and arresting use of sound design is accompanied by a striking visual sense and some incredibly unsettling and disorienting camera work from cinematographer Shreyaas Krishna. Rau's capacity for experimentation is encouraging and definitely hits more often than it misses. On a technical level, Aval is very impressive and Rau's team definitely understand the visual and aural language of horror, and in typical Indian cinema fashion, they crank it up to 11 every time.

For all of its bold imagination and risk-taking, there's one aspect of Aval that is difficult to discuss without spoiling too much, and that is the topical nature of the film. India has been plagued in recent years by high profile controversies, many based on ancient tribal practices that still survive in more rural parts of the country. Aval takes one particular issue that has been in the news and on screen in other films like Bhaskar Hazarika's Kothanodi and uses their project as a platform in a relatively restrained way. It's an interesting take on a touchy taboo topic that gets a bit heavy handed toward the end, but the film manages to incorporate this message relatively seamlessly into the narrative for most of the running time.

I had high hopes going into Aval. Siddharth's last project as a producer, Jil Jung Juk, was one of my favorite Indian films of 2016 and he's made a name for himself as a performer and producer willing and eager to push the envelope. With Aval, he's used his starpower well and put his money and face behind an unusual project that once again proves that the Tamil film industry and filmgoing public is the most adventurous in India. Aval is a film that doesn't look like a standard Kollywood thriller, yet still manages to satisfy audiences because of its ability to tell a familair story in a new way. Aval is one of my favorite Indian films of the year so far, and is defintely worth checking out.