Review: AGAINST THE NIGHT, Things That Go Bump in an Abandoned Prison 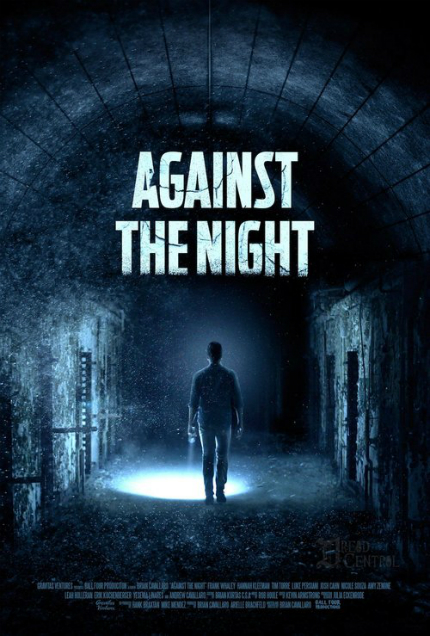 Trapped in a large building with ghosts? Scary! Trying to explain everything? Eh, not so scary.

In Against the Night, writer/director Brian Cavallaro aims for a different, potentially refreshing approach to a haunted house tale. Rather than maneuvering a small group of people into tight spaces and then recording their reactions to unexpected horrors, found-footage style, the story begins with a larger group of friends who are lured into a situation that slowly spins out of their control, with POV footage employed only to a limited degree.

Nine friends have gathered at a house-warming party. It's a warm and cozy evening, filled with laughter and alcohol, though an invasive peek into a lovemaking session suggests that one member of the group is a nasty creep. The creepy voyeur laughs it off, and no one appears to be unduly disturbed, suggesting that his behavior has long been tolerated.

The group itself is hard to define as anything other than a collection of young white people. Consisting of five women and four men, the dynamic is shaped by the voyeur, a bespectacled filmmaker named Hank (Luke Persiani), who has an ulterior purpose in mind when he invites everyone to join him at an abandoned prison. He wants to make a ghost hunting video and he needs their help to populate it.

As the opening scene of the film reveals. Rachel (Hannah Kleeman) is, apparently, the lone survivor of the events that follow. But who knows? You gotta watch it to find out! Or that's the hope, one presumes.

The other seven friends largely remain ciphers, including the couple caught in the lovemaking tryst earlier. So when things begin to go haywire, as we know they will, it's difficult to distinguish one from the other, especially since they're running around an abandoned prison at night, illuminated only by the lights on the camera equipment that they install and the occasional intrusion of moonlight.

It's difficult to empathize with strangers when they're running around in the dark, especially since we've been given the barest of insights into their personalities. We can see that something or someone else is also running around the prison grounds, barely glimpsed in the shadows, yet it's near-impossible to discern the threat level, which means empathy diminishes further, even as the screaming begins.

With these challenges in mind, Against the Night valiantly endeavors to build tension through its visual scheme. Mixing the POV footage with a more traditional third-person perspective makes it easier to keep track of the people, as well as the occasional shadowy figures, creating room for suspense to be created. That's all well and good, except that the expected tension never manifests itself through those visuals. The editing is not tight, so too many scenes run unnecessarily long, and the set-ups are limited because of the low-light scenarios.

It's evident that Against the Night is a modest, low-budget affair, with distinctive ideas, intentions and twists in mind. Unfortunately, it falls flat.

The film opens in select theaters in Los Angeles, New York and other cities on Friday, September 15.

Do you feel this content is inappropriate or infringes upon your rights? Click here to report it, or see our DMCA policy.
Brian CavallaroFrank WhaleyHannah KleemanTim Torre